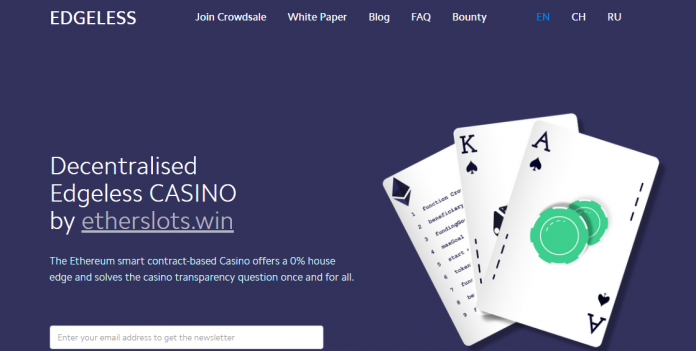 Edgeless.io launches it’s ICO this week with the goal to be the first provably fair casino featuring a 0% house edge.

I caught up with Ignas Mangevicius, Blockchain systems developer and co-founder of Edgeless, to take a closer look at the project.

How did you arrive at the idea for an Edgeless Casino?

Five months ago we did an experiment to prove to ourselves and the Blockchain community that Ethereum’s promise of a functioning and unhackable smart contract was possible. To do that we launched our first slot machine based on Ethereum Blockchain which is fully transparent, Etherslots.win. It was really popular in the community so it didn’t take long for us to realise what else we could offer the gambling industry. Soon after that Edgeless was born, a new concept with faster randomness generation on Ethereum and 0% house edge.

What is so significant about a 0% edge?

Actually, 0% house edge gaming is not a new idea in the gambling industry. It has been floating for several years but people have not really known how to implement it. At the moment Casinos actually compete with each other to reduce house edge as low as possible and from a gambler’s perspective, they are always looking for the lowest price across in a whole market. Extreme gambling enthusiasts in particular, because if they gamble long enough on 0% house (using a perfect strategy), their losses will be 0.

People know that skill and luck games such as Black Jack can bring profits to the casino even on 0% house edge rules, however 0% house edge was hardly implementable in traditional online casinos. Casino operational costs are just too high so 0% house edge games would not be able to cover these. Now, with a rise of Blockchains, cryptocurrency is becoming really promising for a gambling industry. Casino operation costs can be significantly reduced, especially costs related to currency transactions and regulations, so it’s possible to lower the house edge significantly.

So with significantly reduced currency translation costs, operational costs, and security costs to protect our centralised systems, finally we can offer Black Jack on 0% house edge by using the Ethereum Blockchain and still cover operational costs of the casino.

If the platform has zero edge how does it maintain itself in profit?

By offering games that are not based on pure luck such as Black Jack and Lunar Poker. These games involve a decent amount of decision making for the player. If players can play the perfect strategy game they can take advantage of the best possible outcome from our 0% house edge. However, an average player does not play a perfect strategy game, human error gives the mathematical advantage to the casino equivalent to a 0.83% house edge. We have a gambling expert on our team who has been involved in building our revenue model and we have taken data from large casinos to calculate the expected value on a Black Jack game, so we are confident we will be profitable. Source

In terms of building revenue, Black Jack is a really popular game and we hope that it will invite people in to try our site. We hope it will attract a lot of gamblers, just by sharing it via gambling community forums. We have had some great feedback from the community about the project already. Once we have a certain momentum we plan to introduce a wider range of games such as Sports Betting or Dice which are monetised slightly differently and which will provide further revenue streams.

Since Ethereum is used as the betting token, what is the purpose of the edgeless token?

EDG token holders will be rewarded for their early contribution to the project via a special “Edgeless Lottery” that is currently in development. 40% of the casino profits will go into a prize pool of the lottery which takes place every month. EDG tokens are needed to participate in the lottery and win a share of casino profits. The lottery is designed in such a way that player’s never loose EDG tokens and players are guaranteed to win all the time, proportional to the amount of EDG tokens they have.

What games do you plan to roll out in the future of Edgeless?

In 2017 we will launch our 0% house edge Black Jack, 0% house edge Lunar Poker, Sports Betting and Dice. Dice is a pure luck game of course so it will not be 0% house edge which we expect will bring in extra revenue.

Who is in your team of the project? Where are you based at?

We are based in Lithuania and Germany. Our team is as follows: