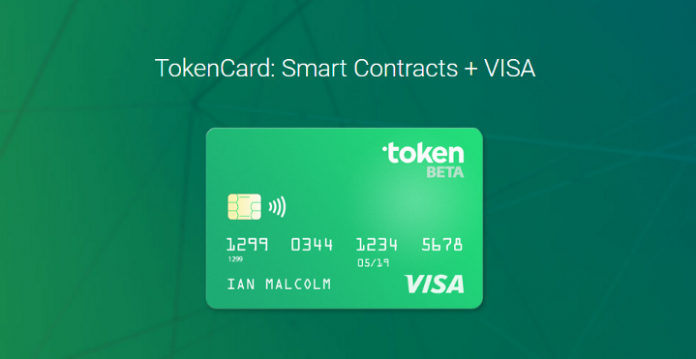 Are you ready to use a Visa card to use ETH and other ERC-20 cryptocurrencies to payments anywhere? That’s the premise behind TokenCard, a new fintech company that has joined up with a Visa issuing partner in China to make Ether and ERC-20 compliant tokens usable in everyday life.

Even better, by participating in their crowdsale, slated for May2, 2017, you can not only help support the project, but also buy into their native cryptocurrency called TKN.

The crowdsale will last a maximum of seven days, with a funding goal of $4.5 million, and an absolutely maximum cap of $12 million. Any additional funds collected beyond the $4.5 million goal are currently slated for customer acquisition and marketing expenses. Early interest indicates that they may hit their cap well before the seven days is up.

TKN is a special kind of Ethereum token. It is an asset backed token where the underlying assets represent an accumulation of different ERC20 tokens over time. The underlying assets are secured inside the TKN Asset Contract from which TKN holders can redeem their pro-rata share from.

Whenever the TokenCard is swiped, the transaction incurs a 1 per cent licensing fee which accrues to the TKN Asset Contract. The licensing fee is denominated in the token used, however, TKN backed swipes don’t incur a licensing fee.

Since the TKN Asset Contract accrues licensing fees in the token transacted in, it will eventually equate to a diversified portfolio of the most popular tokens on the Ethereum network. TKN holders effectively have a passive stake in the growing economy of tokens.

TKN holders can invoke a mechanism known as ‘Cash and Burn’. Invoking ‘Cash and Burn’ redeems your pro-rata share of tokens within the TKN Asset Contract, however, this also irrevocably destroys the TKN.

To Burn or Not to Burn

As holders burn TKN to receive their share of the underlying, they forgo any claim on future accrued licensing fees. This means remaining TKN holders will now having a larger proportional claim on the TKN Asset Contract.

While many people have paid for goods and services using cryptocurrencies, and used services like LocalBitcoins to convert some coins into fiat currencies, it’s still not very convenient to make typical purchases with any other Blockchain currency. While VISA services are available for Bitcoin, that service has not been available for other cryptocurrencies yet. And Tokencard plans to change that.

The team led by Mel Gelderman at TokenCard has endeavored to provide a solution, and if it works as intended they’ll have solved the riddle of the consumer usage case for tokens. Enabling holders of ETH and other ERC-20 tokens to use their funds like normal currency no matter where they are in the world is a massive improvement over what we have now. Tap to pay, swiping, and the simple convenience most users prefer for ordinary purchases will finally be achieved with ETH and related currencies. Initially this card will be available in the Chinese market, but I would expect demand will pull it into the European and North American markets sooner rather than later.

What kinds of features does TokenCard have?

It’s a depositless system, in that you connect your existing coin wallets to it, rather than having TokenCard hold it for you. It removes liability for the company while also allowing you to maintain your fund security.

According to their whitepaper, in addition to the security features you find on any Visa card, TokenCard will have additional ones, all of which can be controlled through their app. You can set daily spend limits, token denominated spending limits, percentage based spending limits, and fiat based spending limits. You can temporarily freeze your card, and there’s also a “Stop the World” feature that allows you to immediately drain your assets to a pre-designated safe wallet if you suspect your card has been compromised.

On to the fun stuff, how to spend your money. TokenCard will allow you to designate how you want funds withdrawn if you’ve got multiple coins connected to your account. You can set it to withdraw from a single asset, to split transaction withdrawals evenly among several assets, or to withdraw from your portfolio according to percentages you set.

The convenient charts and graphs that track how much you’ve spent, and where, will be included with the MVP release, and there are several planned features to be added in the future, such as: platform earnings, estimated costs for acquired tokens, and asset income (dividends from existing tokens).

What are the consumer profiles for TokenCard users?

I’ll use myself as an example case. I’m pretty new to the Blockchain world, and I only have a few thousand dollars invested into BTC and ETH. I’m based in Moscow, but I’m a U.S. citizen who doesn’t plan on living here forever. I work with people from around the world, and I can get paid in multiple currencies. If I could just do one-time conversions of these currencies into ETH, and then use that card for most of my daily purchases, life would be less complicated for me, both when I’m in Moscow and when I’m traveling.

It will also be ideal for remittance payments, and for handling transactions in your home country while you’re far away. If you’re a Chinese developer working in Singapore for a few months, maybe you don’t want to go to the hassle of setting up an account there, but you also want to get paid. Before you leave home you set your mother or another family member up with a TokenCard Visa. You convert your salary into ETH or another currency and you can transfer money to them in less than 15 seconds with a very low fee, as compared to using Western Union or normal bank transfers that take several days and charge extremely high fees.

They have one of the best written white papers that I’ve read, and they illustrate their goals and business case very clearly. You can read it here.

Cryptocurrencies remain extremely volatile. Bitcoin is consistently on track for topping their biggest monthly increase and decline. It faced one of their record-highs of...
Read more
Opinion

Jason Guthrie, Head of Digital Assets, WisdomTree The outlook for cryptocurrencies has become a hot topic for market participants, spectators and press alike. While the...
Read more
News

Chinese Vice Premier Liu He told a group of finance officials last Friday that the government would clamp down on bitcoin mining and trading....
Read more
- Advertisment -