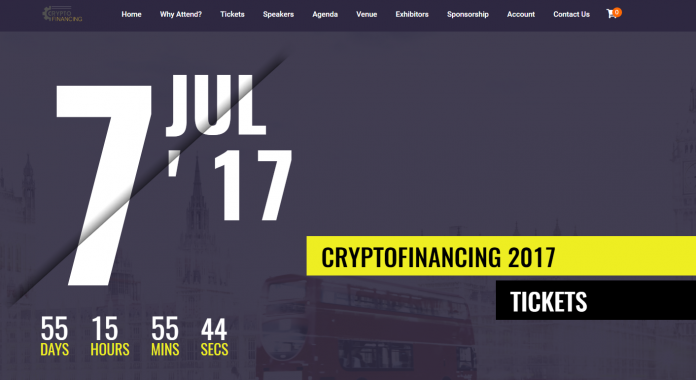 CryptoFinancing – Europe’s first conference opening the lid on the emerging world of Initial Coin Offerings (ICOs) and Token Sales – will take place in London on July 7, 2017 at Grange Tower Bridge Hotel. The inaugural event, will bring debate on the nascent industry’s effect on venture capital, regulatory environments, as well at talks from ICO projects of the past and the future on methodology and design.

Come see some of the leading players in the space discuss how crowdsales have overtaken venture capital as the main financial driver of innovation for Blockchain projects in just one short year.

Startups – would you like to learn how other young projects have raised millions of dollars in minutes without giving up a lick of equity?

Imagine open sourcing all your software and structuring the company as a non-profit foundation bypassing the VC route, designing your own currency and assigning a value to it and selling it… raising millions – and imagine doing all this without having even built any software and just putting an idea down on paper – essentially offering vapourware with a bit of math and text on a few pages called a ‘whitepaper’.

Swiss foundation DECENT did just that recently, pulling in 5881 BTC worth some $7 million in today’s BTC-USD price.

Learn how tokens are designed and how to give them utility value, learn how they are marketed and platforms they are executed on and the legal aspects and much more!

Investors – Welcome to the new world of Initial Coin Offerings (ICOs) – a phenomenon born from the Bitcoin community that is rocking some parts of  the venture capital industry, who are now beginning to take a good, hard look at  this new financial instrument which has both its benefits and its disadvantages as well as threats and opportunities to their own business model.

This new fundraising phenomenon is fueled by a synergistic convergence of Blockchain technology, new wealth, clever entrepreneurs and crypto-investors backing Blockchain-driven ideas that are raising funds by creating their own cryptocurrencies and offering discounted rates on digital assets before they hit the cryptocurrency exchanges – sometimes up to 40 per cent. The investors can then opt to cash out to a fiat currency early via Bitcoin or Ether or wait for the currency to rise.

In other words a digital asset is created, a value determined – and by consensus reached by investment, value is settled by a network of participants rather than by a central authority or government.

Venture capitalists, who generally have been standoffish to the ICO phenomenon are now becoming more interested for a number of reasons.

Liquidity is the second reason VC are interested. Rather than tying up vast amounts of funds in a startup or Unicorn and waiting for the long play – an IPO or acquisition –  they can see gains quicker in ICOs and pull profits out easily.

Government and Regulators – ICOs are the Wild West of financing – they sit in a grey zone where the SEC in the USA and many other regulatory bodies are still investigating. The main problem is, most ICOs don’t actually offer equity in the venture,  therefore are outside of traditional legal frameworks when it comes to securities. They only offer discounts on cryptocurrency before they hit the exchanges after the ICO, therefore do not fit into the current definition of a security.

Secondly, they are global instruments, not national ones and they are funded using Bitcoin, Ethereum and other cryptocurrencies which are not controlled by any central authority or bank. Anyone can invest and they can even do so pseudo-anonymously. Currently there’s no Anti-Money Laundering (AML) or Know Your Customer (KYC) framework though some companies are working on that such as Tokenmarket, who has teamed up with the Stock Market of Gibraltar to offer KYC and AML compliant ICOs.

Tickets are available at http://www.crypto-financing.com

Facebook
Twitter
Pinterest
WhatsApp
Previous articleAST to Deliver Blockchain-based Proxy Voting Solution
Next articleWall Street Fintech PR Agency, Wachsman PR, Chooses Dublin as European HQ
Richard Kasteleinhttps://www.the-blockchain.com
In his 20s, he sailed around the world on small yachts and wrote a series of travel articles called, 'The Hitchhiker's Guide to the Seas' travelling by hitching rides on yachts (1989) in major travel and yachting publications. He currently lives in Groningen, the Netherlands where he has set down his anchor to raise a family and write. Founder and publisher of industry publication Blockchain News (EST 2015) and director of education company Blockchain Partners (Oracle Partner) – Vancouver native Richard Kastelein is an award-winning publisher, innovation executive and entrepreneur. He has written over 2500 articles on Blockchain technology and startups at Blockchain News and has also published in Harvard Business Review, Venturebeat, Wired, The Guardian and a number of other publications. Kastelein has an Honorary Ph.D. and is Chair Professor of Blockchain at China's first blockchain University in Nanchang at the Jiangxi Ahead Institute software and Technology. He has over a half a decade experience judging and rewarding some 1000+ innovation projects as an EU expert for the European Commission's SME Instrument programme as a startup assessor and as a startup judge for the UK government's Innovate UK division. Kastelein has spoken (keynotes & panels) on Blockchain technology at over 50 events in 30+ cities.