With the advent and evolution of Ethereum, has come the rise of tokens and decentralized business models. Beyond freeing us from previous financial constraints, Ethereum is enabling entirely new methods of coordination, communication, and incentivization, by providing the world with the ability to create and distribute their own tokens.

Two major hurdles for this is issuing tokens in a secure manner can be difficult, even for developers, Bancor plans to not only change this, and enable even those completely new to blockchain technology to reap the benefits.

Bancor is a protocol for the standardized creation of Smart Tokens on the Ethereum blockchain. Smart tokens are standard ERC20 tokens which implement the Bancor protocol — providing the ability to instantly process buy and sell orders, which drive the price-discovery process. Due to this capability, smart tokens do not need to be traded in an exchange in order to become liquid.

The protocol provides an easy to use yet powerful toolset that anyone can use to quickly and safely deploy new monetary systems, issue value-backed assets, and create currency networks which were never before possible.

Tokens provide communities with the ability to coordinate around shared goals, to outwardly promote their common interests, and to collectively govern their paths forward. Amongst an array of possibilities, they can represent influence, voting rights, work contributed, and standing within a social circle.

Bancor seeks to enable the long-tail of user-generated tokens, giving niche communities and their currencies the ability to thrive regardless of their size. Trading on the network can be established to facilitate the autonomous exchange of any token to another token, free of a spread or counterparty risk. This gives the ability for any token to be continuously liquid and useful to members of a community as soon as they’re created.

Thanks to the new protocols Ethereum has introduced, there’s a whole new ecosystem of applications being developed that are completely decentralised (also known as DApps), and Status aims to provide a user interface to access them. These decentralized applications remove the need for middlemen and centralised servers, providing a clear path forward towards an internet where users get to own their own data, and an economy built on permissionless, open protocols.

It is their belief that messengers are evolving into a new type of OS, and are becoming gateways to our economies and social lives. Status uses messaging as a platform, and by combining both a messenger and a browser we are building a gateway for everyday smartphone users to begin using DApps, and a simple way for DApp developers to reach new users.

Status runs go-ethereum directly from your mobile device, providing a mobile Ethereum node in your pocket.

Up until now, Bancor’s user experience has utilized a web interface, and seamlessly integrated with popular centralized chatbot platforms, including Facebook Messenger, Telegram, and Wechat to provide a frictionless login experience for their users. We are pleased to announce today that Bancor will be adding Status to its list of integrations in the coming months, and Bancor will be utilising the Status API. 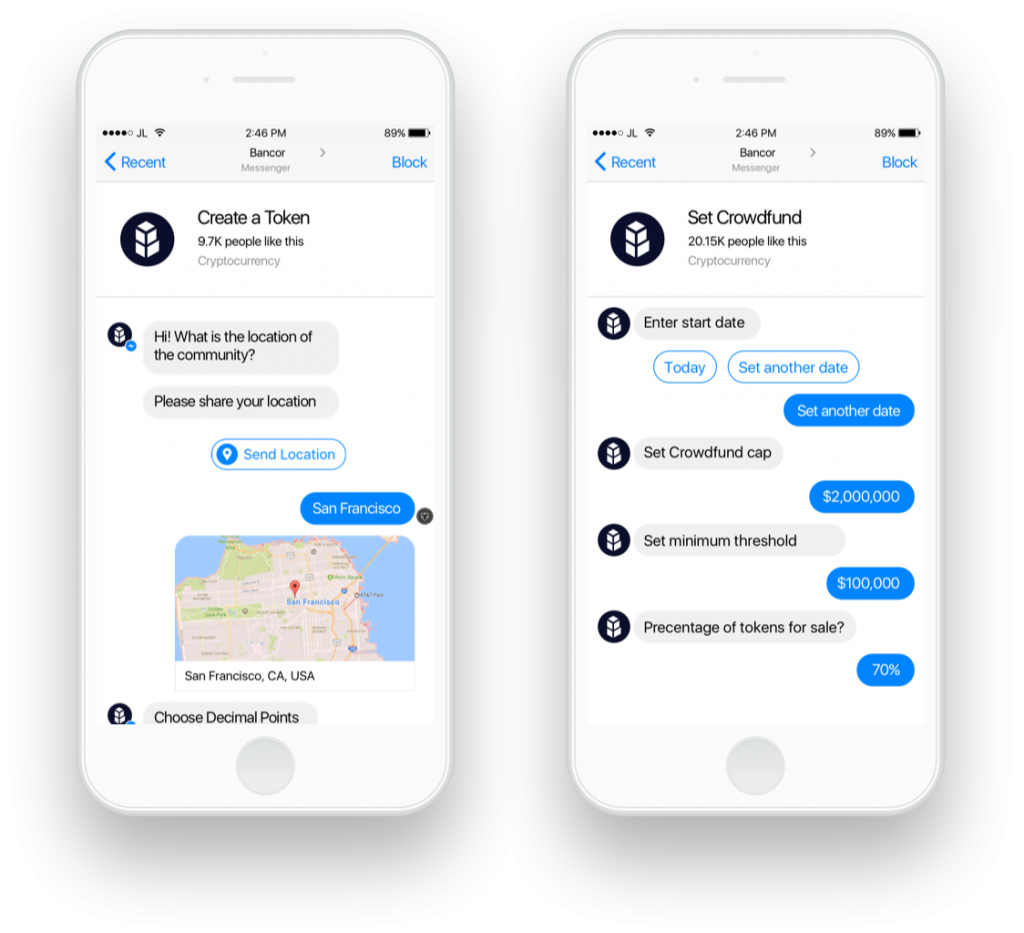 By expanding support to Status, Bancor will enable its users to utilize a fully decentralized messaging platform for both user authentication, notifications and bot-assisted functions such as issuing a new token, creating new communities, and even ETFs (token baskets), all without the need for any technical knowledge of Ethereum.

If you want to have a sneak peak of what they have in store check out the Bancor Network Whitepaper, or come chat with them about it directly over on the Status Slack or the Bancor Telegram group.

Bancor will also be launching an Initial Coin Offering (ICO) also known as a Token Sale or Crowdsale will begin on May 30, 09:00 GMT.

Facebook
Twitter
Pinterest
WhatsApp
Previous articleFuture\Perfect Lab Launches Blockchain, IoT, Artificial Intelligence and Security Convergence Project
Next articleShapeShift Launches First Trustless Asset Portfolio Platform
Richard Kasteleinhttps://www.the-blockchain.com
In his 20s, he sailed around the world on small yachts and wrote a series of travel articles called, 'The Hitchhiker's Guide to the Seas' travelling by hitching rides on yachts (1989) in major travel and yachting publications. He currently lives in Groningen, the Netherlands where he has set down his anchor to raise a family and write. Founder and publisher of industry publication Blockchain News (EST 2015) and director of education company Blockchain Partners (Oracle Partner) – Vancouver native Richard Kastelein is an award-winning publisher, innovation executive and entrepreneur. He has written over 2500 articles on Blockchain technology and startups at Blockchain News and has also published in Harvard Business Review, Venturebeat, Wired, The Guardian and a number of other publications. Kastelein has an Honorary Ph.D. and is Chair Professor of Blockchain at China's first blockchain University in Nanchang at the Jiangxi Ahead Institute software and Technology. He has over a half a decade experience judging and rewarding some 1000+ innovation projects as an EU expert for the European Commission's SME Instrument programme as a startup assessor and as a startup judge for the UK government's Innovate UK division. Kastelein has spoken (keynotes & panels) on Blockchain technology at over 50 events in 30+ cities.