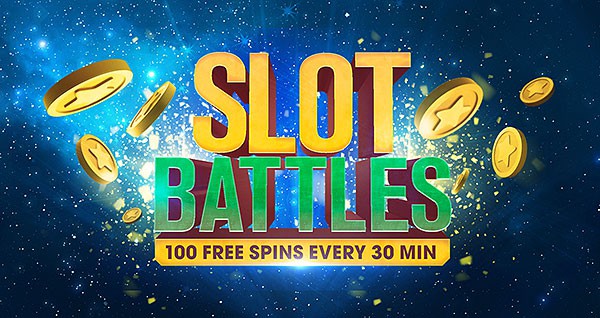 If you’re familiar with BitStarz, we’re sure you’ve noticed they love tournaments. I mean, they already have immensely popular ones such as Extra Wars, Slot Wars and Table Wars. Don’t let the names fool you though, you don’t really have to fight that hard for rewards as BitStarz are extremely keen on rewarding their players with various bonuses!

“Players love the variety of tournaments we have, and I’m so glad to be able to launch a concept where everplayer has a fighting chance, big or small. I sincerely hope and believe that Slot Battles will be a winning concept!”.

Instead of having to have the highest turnover as in the other tournaments at BitStarz, here you’ll get points for getting a multiplier, and the player with the highest number of points at the end of the game round, wins. This means you don’t need a massive bankroll in order to grab a nice win!

This means that everyone has a fighting chance in each battle and players won’t be in a David vs. Goliath situation. Size doesn’t matter in this tournament, it’s all about guts and glory (and free spins of course).

Bitstarz.com offers games of several different providers in a hybrid multi-currency environment and is one of the leading bitcoin casinos on the market, always on the front line of releasing new and exciting games. They’re also top-ranked among over a thousand casinos on the world renowned casino review site AskGamblers.

To Hedge Against BTC’s Volatility, Phemex Launch GOLD/USD Pair to Trade Gold Perpetual Contracts With up To 100X Leverage

5 Important Risks to Watch in the Cryptocurrency Market