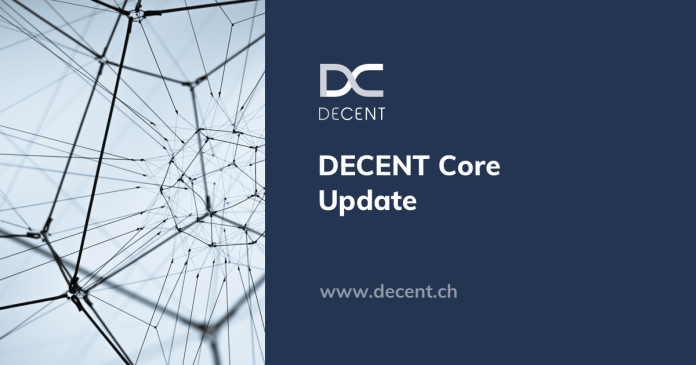 This update is quite large and it will most likely be the last one of its size for 2017. There are a number of much more technical features deep in the core, that are not covered here. Info about these technical features can be found in their API. Developers and project creators can contact the DECENT team for assistance with specific inquiries or use-cases.

Much of the new functionality stems from the fundamental ability to create and distribute entirely new assets, called User Issued Assets (UIA).

Here is a look at the basics of UIAs and then a breakdown of some broader uses-cases. After that they will cover the smaller, but no less important, additions to DECENT.

Users can already apply monitored assets to set prices for content based on established currencies not just in DCT (e.g. USD, EUR or BTC). With this update, though, users will also be able to create their very own tokens or currencies. This unlocks a wide range of uses cases:

There are many variations within each of these broader use-cases. Some of them are addressed below. Blockchains, in general, are very flexible so there are too many uses to cover in the space of one article. And, as developers learn about these tools more applications will surely be discovered.

Event Based Tokens
Instead of creating a new digital currency like a bitcoin, where each token is interchangeable, account managers can create a set of entirely unique tokens. These would be similar to event tickets; you print a bunch of tickets but each ticket has a unique ID so it can’t be duplicated. It is the same with these UIAs, each token can then perform the same functions as a traditional event ticket, with some added Blockchain security of course.

Event tokens can even be transferred after the original sale. For example, tickets for a festival could be issued as one of these “ticket-tokens” and then be bought in bulk by a “distributor,” that intends to resell and distribute the ticket-tokens to individuals. The event or ticket-token issuer gets the funds right away, and lets the “distributor” take on the risk of ticket sales.

The advantages: Canceled or postponed shows could still honor the token at a later date. Ticket-tokens could easily be traded from peer to peer without the need for security measures like “non-transferable tickets.” Proof of ownership is verified in the Blockchain when the token holder enters the event.

These ticket-tokens could also be used for anything where token holders are granted limited time access to something.

Rewards Points
Merchants around the world offer rewards points for loyal customers. These points are often accumulated and then redeemed for merch or discounts on future purchases. “You have earned 10 reward points!

You can now buy “this item,” regularly priced at 35USD, for just 10 reward points when you buy..!” This common sales tactic is now easy to set up using DECENT. All an account manager needs to do is create UIAs as reward-tokens. These reward-tokens can then be distributed for exclusive use within the issuer’s ecosystem. Issuers can then offer special items in exchange for reward-tokens or allow customers to redeem reward-tokens for discounts on future purchases.

The tokens could even be used for perks, like free shipping or exclusive add-ons, like engravings or personalizations. Again, too many use-cases to cover here, just think, exclusive custom currency and go from there.

Crowdfunding
Whether being used as a transferable coupon for a pre-sale, or doing an IPO on a small company, issuing an asset is one of the most effective means of raising money for a cause. As with other forms of UIA there are so many ways to raise capital in exchange for tokens. Start up developers that are interested in self funding can contact DECENT to learn more.

Digital Property
With UIAs, account managers can create unique licences-like tokens. These can be limited in number and, since they are unique, they can be traded. Essentially, they represent ownership of, or the rights to use, a certain digital item.

This digital-property-token can represent a number of things. For example, it could be a unique sword in an online RPG or a key to play a video or sound file. The application can check for possession of the token before allowing the digital item associated with that token to be used.

This license can work independent of the issuer. So the digital item would continue to work even if the original issuer disappeared. This solves one of the major issues many users have with some centralized forms of DRM (digital rights management), that DRM content is dependent on the managing authority remaining active. For example, should Steam (a popular game distributor) go under, any games purchased on the platform would be difficult to access, even though users have already paid for the rights to said content.

Seeder Rating System
As content distribution is based on its seeders there is a need to distinguish reliable and unreliable seeders, so we implemented an automatic mechanism which will monitor their service and rate them based on that. While we don’t collect any personal data, these ratings are tied to seeder accounts and are publicly available. This allows publishers to pick the most reliable seeders, so they can be confident that their content will get distributed.

Instant Messaging
This feature allows for DECENT users to send messages to one another. These messages are encrypted. This means the message is readable only for the involved parties.

Update Manager for Mac and Win Applications
Automatic updates are now supported for MacOS and WIN. The DECENT GUI client will now be set to update automatically.

Geolocation of Seeders
Since DECENT Network operates worldwide, it is important to select seeders by geographical location. It wouldn’t be as effective to seed content meant for the US market if a seeder would be based in China. Therefore, seeder location gives seeders an option to provide geolocation so they can offer the best possible service.

Seeder Settings
Due to the fact that the value of crypto-tokens can be volatile DECENT implemented a mechanism for seeders that allows them to set the price in whichever currency they choose. Similar to the way authors can set their prices with Monitored Assets.

So with UIAs and the additional features from the new update, comes a whole slew of functionality and it all works seamlessly with the speed and security inherent in the DECENT Blockchain.