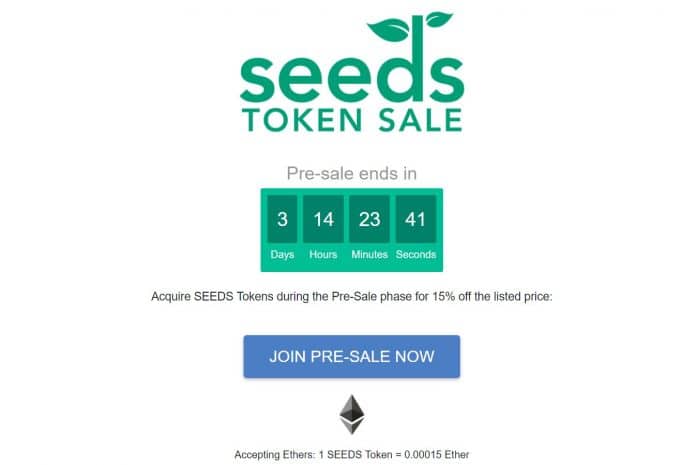 Seeds, a San Francisco-based tech company that blends social good with in-app sales and ecommerce, launches a sale of its Ethereum-based application token SEEDS, currently in Pre-Sale stage, with Crowdsale scheduled on November 1, 2017.

SEEDS tokens allow users to submit their needs to the blockchain system. Using a robust recommendation algorithm, the Seeds system will present each need to those who will be most likely to get excited about helping. These needs are displayed during the purchase flow of participating apps and online stores. When someone makes a purchase from participating companies, a micro-donation from that order goes to help those in need. This is then gifted to the person who made the request, no strings attached.

The Seeds vision is to transform the current economic system, making it a win-win-win for businesses, beneficiaries, and contributors alike. And it works: Seeds has been in operation since 2013, and has increased sales for business partners by up to 30%. Seeds shoppers spend 4x as much as other shoppers, and make more repeat purchases.

“In the future, I believe more and more of us will come to understand that the intention we put into things is most important, that it’s all we have control over anyway. Seeds is revolutionary in that it infuses good intention into every digital transaction we make,” explains Rachel Cook, founder and CEO of Seeds. “For that reason, Seeds can transcend the economic system as we know it.”

For those interested in participating in the Token Sale, visit seedstokens.com.

Seeds is a San Francisco-based tech company. The company is a TechCrunch Disrupt Battlefield 2016 competitor and a Techstars NYC 2015 startup participant.