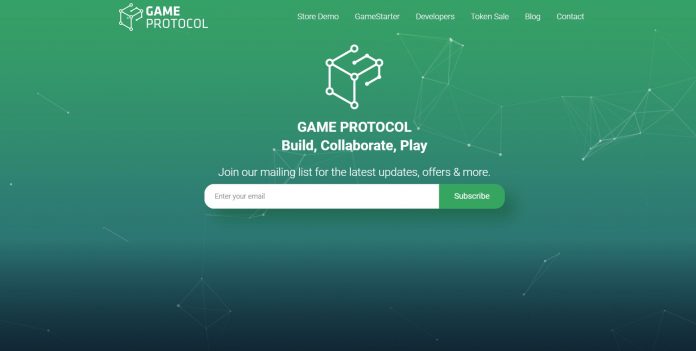 Blockchain startup, Game Protocol is developing a platform that will decentralize the gaming community and enable erstwhile non-present independent developers to find expression and participate in a market that will be fair, secure and reasonably competitive.

Game Protocol’s project is aimed at redefining the existing narrative that has excluded a lot of key players in the industry. The current system permits the major studios to dictate the pace conditions within the industry, which empowers them to swing the market conditions in their favour most of the time.

Game Protocol’s platform is designed to open up the market and enable a level playing ground for every participant. It will also eliminate the existing irregularities like the misuse of customers data and exposure to security threats associated with centralized platforms.

Opening up the market is expected clear out the existing redundancy and attract new and previously excluded participants who will now be more comfortable with the gaming ecosystem both in aspects of security and fair play.

Built on the Ethereum blockchain using smart contracts, the Game Protocol decentralized community is a platform for game developers to create, collaborate, and distribute Decentralized Automated Games (DAGs). The software will provide game creators with the tools necessary to easily make the best and most creative DAGs possible. The platform will also allow developers to advertise and distribute their work. Players can then use the platform to play different DAGs.

The smart contract upon which DAG runs is distributed, trustworthy and transparent. It is an environment where every process, from login to payments is automated. This eliminates the chance for any form of fraud during the processes involved.

With the platform’s Blockchain Tools, game developers can create in-game cryptocurrencies and enjoy multiple development tools such as blockchain R&G and a unity 3d wallet plug-in. With Game Fundraiser, Indie game developers can raise funds on Game Protocol’s Game Starter platform via Game Protocol tokens Community. The project will also have a lively community and forum dedicated to indie games and developing projects.