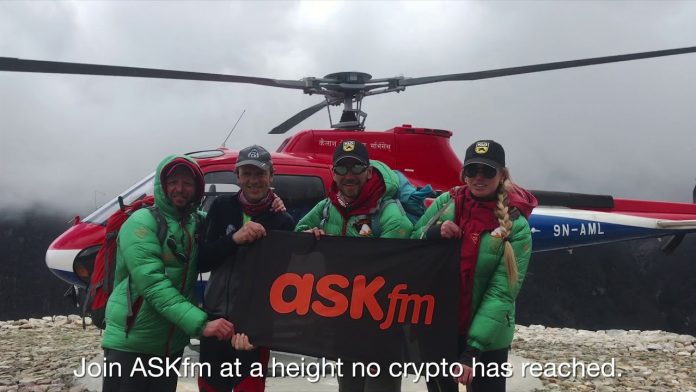 Lambos, bimbos and all manner of excesses populate the crypto world, side by side with the alternative, libertarian values which could make it a better place. But the initial coin offering (ICO) universe has taken on a darker spin, with news of a startup that was so desperate for publicity that it led to man’s death.

Getting exposure for an ICO is not easy these days. The social media ban on advertising means marketing departments need to get creative. Social network startup ASKfm took that to the limit earlier this month, when it decided to place tokens on top of the world’s highest mountain to kickstart its token sale.

ASKfm’s great idea was to put 500,000 ASKT tokens on the peak of Mount Everest “for someone who is brave enough to climb the mountain,” according to the company’s statement.

Here’s the video announcing the climb:

And this is what happened, according to ASKfm:

“The group left Mt. Everest base camp #4 on May 13th, 2018, at night local time and headed towards the peak. For two days straight, they were on an altitude so high that there were no means of communication with them. For the final stretch of the ascent and the beginning of the descent, they couldn’t be reached with cell phones, internet, or GPS. Of course, there were issues. While descending, two of the guys were stuck at above 7,000 metres with no reserve oxygen for the entire period and were unable to continue due to the extreme weather and health conditions. Air rescue responded on the second day, they’re both safe and currently receiving treatment.”

So their team made it back, but what ASKfm’s statement doesn’t say is that Lam Babu Sherpa, one of the Nepalese guides assisting them, didn’t. And officials have now confirmed his death.

Pressed for a comment, by the FT (paywall), ASKfm said:

“ASKfm had no updated information regarding the whereabouts of the missing Sherpa, as the group was always moving forward and were assisted by many different sherpas along the way. When Taras and other climbers were rescued by a helicopter and were evacuated after being injured. The last update they received about the missing sherpa was that other sherpas went to look for him. We don’t know what happened next, as this was the last official update we received.”

Why go to so much effort? ASKfm’s response, according to their statement, was:

Guys, surely, there are other ways out there to boost your offering?