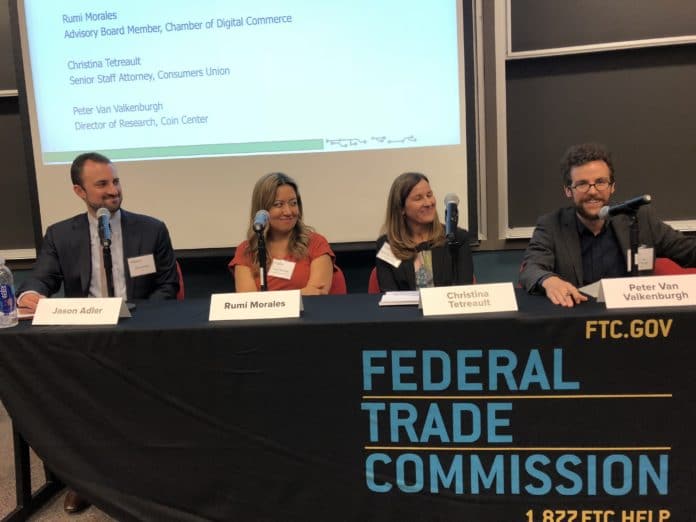 The FTC held its “Decrypting Cryptocurrency Scams” workshop in Chicago on Monday, aimed at protecting consumers who are “taking advantage of new and emerging financial technology.” The half-day workshop was also live-streamed.

“We’ve seen many signs that scammers are using the lure of cryptocurrencies to rip off consumers,” said Smith in his opening remarks.

There are now more than 1,600 cryptocurrencies with a projected $290 billion USD market cap, according to Smith. Scammers and thieves see the size of the opportunity and are using both new and old techniques to take advantage of consumers. Smith said consumers lost $542 million USD. If the trend holds, that figure could climb to $3 billion USD by the end of 2018, Smith said.

The FTC must balance protecting consumers and supporting innovators who “play by the rules,” said Smith. He recounted the FTC’s efforts to combat deceptive practices in its 2016 settlement with Bitcoin mining operation Butterfly Labs, which was prohibited “from misrepresenting to consumers whether a product or service can be used to generate Bitcoins or any other virtual currency.”

The first part of the session was moderated by Jason Adler, assistant director of the FTC’s Midwest Region, and included panelists:

Rumi Morales, an advisory board member at the Chamber of Digital Commerce
Christina Tetreault, a senior staff attorney at Consumers Union
Peter Van Valkenburgh, Director of Research at Coin Center.

In telling the difference between cryptocurrency and fiat currency, Morales said, “It looks like a duck, it quacks like a duck — but it’s not a duck…That’s the gray area that you all have to navigate.”

The panel reviewed blockchain and cryptocurrency history and basics, discussing the privacy, security and consumer understanding of the technology.

“We’re still in the early days of this technology,” said Van Valkenburgh, likening the crypto community to the Internet of 1994. “We’re a ways away…but there is real value here…”

Tetreault of the Consumers Union added, “If you look at the precariousness of most people’s finances…it might seem really, really appealing to jump in here…Some people might be jumping in for their retirement. That might be fine if you’re 25, but not so good if you’re 65.”

“Pump the breaks, do your homework,” Tetreault said.

Van Valkenburgh warned that people should not invest more money in cryptocurrencies than they were willing to lose. “Bitcoin is a risky business…in general, ICOs are risky business.”

“If you can’t describe what the token is supposed to do,” Van Valkenburgh said, “You shouldn’t buy the token.”

To read the FTC’s Twitter stream of the event, visit @FTC and the folow the tag #cryptoscamsFTC.