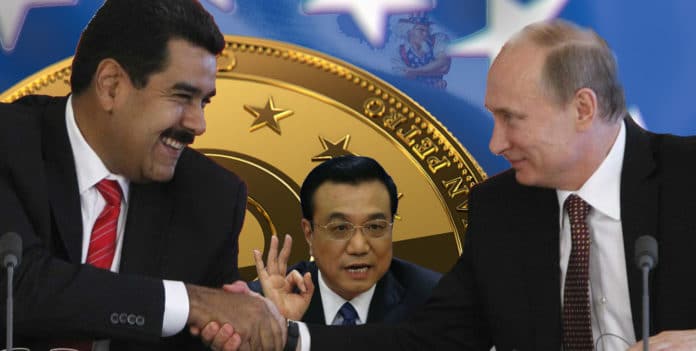 The U.S. Department of the Treasury’s Office of Foreign Assets Control (OFAC) has now sanctioned Evrofinance Mosnarbank, a Moscow-based bank that, at the time of incorporation, Russia’s Gazprombank, in which the majority Russian state-owned gas producer Gazprom is a shareholder, and Russian state bank, VTB Bank, which is Russia’s second largest bank, each owned a 25 percent stake in Evrofinance.

The Petro is unique among cryptocurrencies in that it is backed by Venezuela’s vast reserves of natural resources, most notably oil.

The US Treasury already flagged the Petro cryptocurrency in late January 2018.

“The illegitimate Maduro regime has profited off of the suffering of the Venezuelan people,” said Treasury Secretary Steven T. Mnuchin.  “This action demonstrates that the United States will take action against foreign financial institutions that sustain the illegitimate Maduro regime and contribute to the economic collapse and humanitarian crisis plaguing the people of Venezuela.”

However, Maduro has said in the past:

“We do not approve of these measures that ignore the rules of global trade (…) Commercial restrictions and sanctions are mistaken,” stated Erdogan from Caracas earlier this week. “Political problems cannot be resolved by punishing an entire nation,” he added.

“All Venezuelans will have access to the Petro and through it to make international purchases,” the president said, adding that Petro coins are now a legal substitute to dollars in real estate deals as well as paying for goods such as airline tickets, hotels and the like.”

“The Petro, unlike other digital currencies, doesn’t need to be mined because it already has a value, it is shielded with Venezuelan oil and mining wealth,” said Maduro during a televised address last year, referring to the country’s gold, diamond, iron, and aluminum.

The proven oil reserves in Venezuela are recognized as the largest in the world, totalling 297 billion barrels (4.72×1010 m3) as of 1 January 2014. In the Orinoco Arc and other areas, Venezuela has the 2nd highest gold reserves in the world, with an estimated 10,000 tons.

US President Trump also introduced sanctions against Venezuela’s gold industry last year. And The UK has also joined Washington in applying economic pressure by denying the repatriation of £420 million of Venezuelan gold held in the vaults of the Bank of England.

Venezuela also ditched the dollar for the euro for international trade:

“Since the government launched its first cryptocurrency, the Petro, there’s been an increased amount of interest in Venezuelan society as to cryptocurrencies’ use and the way that they can be used by general, average citizens to generate income. So your average young Venezuelan is now really interested in bitcoins and a whole range of other cryptocurrencies, partly because they allow them to trade on the international scene,” Paul Dobson, a journalist for Venezuela Analysis who is based in Merida, Venezuela, told Radio Sputnik’s Loud & Clear.

“Evrofinance’s involvement in the Petro demonstrated Maduro’s hope that the Petro would allow Venezuela to circumvent U.S. financial sanctions,” stated the US Treasury report.

“Today’s action, taken pursuant to Executive Order (E.O.) 13850, targets a foreign financial institution that has materially assisted, sponsored, or provided financial, material, or technological support for, or goods or services to or in support of, Petroleos de Venezuela S.A. (PdVSA), which is itself an entity that has long been a vehicle for corruption, embezzlement, and money laundering by Maduro and his cronies.  PdVSA, which was designated for operating in the oil sector of Venezuela on January 28, 2019, is a Venezuelan state-owned oil company.”