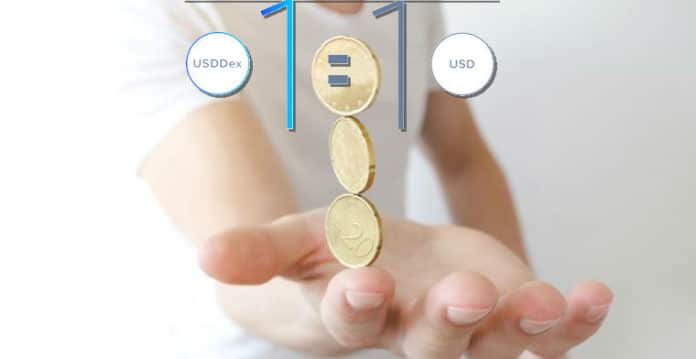 One month prior to the official offering on cryptocurrency exchanges, the Japanese USDDex team made the strategic decision offer a second token sale for their decentralized stablecoin on March 19, 2019. This will be a limited release with a 45 percent bonus structure. The main goal of this decision was to open up to a wider pool of investors to participate in a second tranche and have the opportunity to profit from a strong project backed by a strong team.

Its founder, Hitoshi Shibata, has been working for the Mizuho Financial Group for 15 years and is a member of a group working on Blockchain integration within the Japanese banking industry.

“The USDDex team offers the world a breakthrough technology and a chance to develop the most independent, transparent and potentially greater stable monetary policy than ever before,” stated Shibata.

“According to our forecasts, we believe that USDDex has the capability to become a dominant and influential stablecoin on the market. USDDex is a technologically superb token which offers significant value, relevance and transparency. Large investors and several thousand active members of the community in the industry have really examined the product and have commended USDDex for its unique approach to protect its value against volatility,” he added.

The first closed presale round was conducted in December 2018, exclusively for investment funds and exceeded all expectations in just several hours.

A new era in Blockchain evolution

Most analysts and experts at cryptocurrency market are already declaring 2019 the year of stablecoins. The monthly traded value of only the first five stablecoins exceeded $100 billion and continues to grow.

The USDDex development team has extensive experience in the Blockchain industry and in such projects as OpenVZ and Debian. The priority is set at cooperation with behemoths like 0x Relayers and leading cryptocurrency exchanges.

Some of the core reasons why the USDDex Stablecoin could take a leading position on the market:

USDDex is directly pegged to US Dollar and 1 USDDex is equal to 1 USD. Each USDDex is always collateralized, so you never have to worry about its price fluctuations and its stability is guaranteed regardless of the market behaviour. The highest reliability rating is secured by open source coding, a security audit and the possibility for any participant to look up information on the locked collateral of each USDDex.

USDDex says they comply with the highest requirements of the largest exchanges and is ready to launch in mid-April.