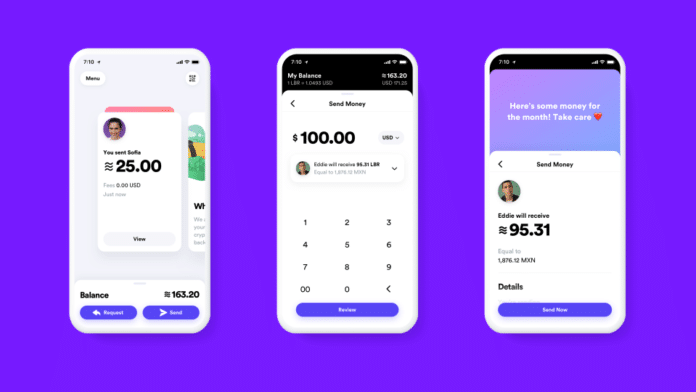 Facebook has introduced a new cryptocurrency-driven financial system, called Libra, in a newsroom release today – and said they will launch it next year. This blockchain fuelled technology will allow Facebook users to send money around the world for free as easily as they share a text message or a photo. The Libra will be run by a nonprofit association by 28 organizations in a nonprofit Libra Association, based in Geneva, Switzerland.

They say they hope to address major problems with Calibra, a new digital wallet that you’ll be able to use to save, send and spend Libra. Issues such as the bankless – as almost half of the adults in the world don’t have an active bank account with worse numbers in developing countries and even worse for women – and approximately 70% of small businesses in developing countries lack access to credit and $25 billion is lost by migrants every year through remittance fees.

“We’ve seen Internet change the game for everything that could be digitized, except for money,” the leader of Facebook’s Calibra division David Marcus told CNBC.

“Whenever a company as large as Facebook gets involved it helps give a larger degree of legitimacy and mainstream acceptance to an industry still plagued by speculation of illegal activity and regulatory scrutiny,” said Investing.com U.S. markets Editor Jesse Cohen.

Tony Gu, Founding Partner at NEO Global Capital, one of the world’s leading blockchain investment firms with over $400 million in assets, commented:

“Facebook’s arrival on the crypto scene illustrates the subtle transformation of money as an economic medium, mirroring the metamorphosis of the global financial system into a virtual economy. Whereas cryptocurrencies are often not viewed in the same league as traditional capital markets, the scales are set to tip in favour of the digital asset class with the social media behemoth’s latest endorsement via Libra. The digital coin’s core proposition, beyond onboarding a greater sense of legitimacy to the nascent space, lies in its fulfillment of a future where Facebook becomes the sole custodian of value. Money prescribed under the modern theory of macroeconomics have two definitions: M1 and M2, with the latter referring to the multiplier effect of currency in use. By boosting the circulation of transactions across its growing platforms, Facebook is a unique position to capture the spillover effects of coins that are issued within its ecosystem i.e. M2, imagined through a built-on-blockchain central bank anchored by Libra. Consequently, the creation of value is now recognized as a responsibility that can reside with players in the private sector, previously the exclusive domain of centralized authorities such as governments and banks. By rewriting the playbook, Web 3.0 will welcome distinctly different rules of engagement, as well as players eager to stake their claim in an unexplored era. The deployment of blockchain technologies, in this instance, gestures to Facebook’s greater need to create a token of trust that exists and functions independently of the business entity. While Facebook’s purposed entry into the crypto-space has translated to optimism in the stock markets, observing steady share gains across the past few days, investors bearing in mind the longevity of their investments have to exercise prudence in navigating the blurring lines between emerging technology and the enterprise environment.”

“Facebook’s bold, all-in crypto approach is not only a breath of fresh air for the industry, but is the new benchmark for unicorns if they want to get to the trillion dollar level. Crypto economies are still in their infancy and have massive growth curves ahead, and Facebook will not only boost the industry, but benefit from utilizing their own internal cryptocurrency to capture and drive value. History will mark Facebook’s Libra as the starting gun of cryptocurrency 2.0. Facebook’s onboarding of the “Who’s Who” in global payments resembles how Apple brought in the largest music publishers to their iTunes platform. While it’s unlikely that the endgame will result in the same power shift away from traditional institutions, Libra will trigger a seismic shift in how these institutions engage and adopt crypto into their businesses – Visa crypto won’t be far away. While critics bemoan the centralized nature of Facebook’s crypto, I believe it is an enormously positive driver that will accelerate crypto into mainstream consciousness and adoption, and provide further capital and opportunities for fully decentralized blockchains like bitcoin and ethereum and the startups that build on them.”

“Having Booking.com as one of the members of the Libra Association is indeed a positive sign not only for the cryptocurrency space but for the entire travel industry. Cryptocurrency and blockchain hold huge potential in revamping the travel industry, making it more efficient and streamlined, so seeing a well-respected, household name like Booking.com pledging their commitment to the future of cryptocurrencies is really refreshing to see. I believe this is far more than a group of tech companies cashing in on the hype, this signals the start of crypto’s mass adoption. Visa, PayPal, Stripe, are all trailblazers within the payments space, and this involvement in Facebook’s Libra is not only reassuring but sparks a new excitement in those of us already championing cryptocurrency as a form of everyday payment.”

Mateusz Tilewski, CTO of Concordium, the next-generation, decentralized world computer and the first with ID-verification built in at the protocol level, commented:

“With some of the world’s biggest payment giants such as Mastercard, Visa, PayPal and Stripe on the consortium of companies governing Facebook’s bespoke cryptocurrency, and with its coin due to be pegged to government-issued cryptocurrencies, this development is bound to transform the way international transactions are carried out. This development is especially interesting in light of the FATF announcing that it will impose new rules for virtual asset service providers (VASPs), with regulatory compliance set to be at the top of Facebook’s agenda. While detractors may claim that Facebook is trying to create a new stream of revenue amidst its net profit falling 51 percent year-on-year, it has an enormous reach of 2.38 billion monthly active users which will undoubtedly help with the mainstream adoption of cryptocurrencies and will see other big players moving into the space.”

“On balance, it’s probably helpful for traditional players to enter crypto, especially alongside other traditional players who already have, such as Visa (with Wirex) and Paypal (with Coinbase). A company like Facebook has huge distribution and potential for P2P or microtransactions, so the mass market will be further exposed to tokens. At this point, people will be free to exchange out of a centralised Facebook system into a more decentralised currency like bitcoin.”

p style=”padding-left: 40px;”>“The introduction of Libra shows that a wide range of players across the blockchain and traditional finance/tech space are interested in blockchain technology and its potential. The Libra Foundation has stated that they think blockchain is a powerful tool for improving financial inclusion and it will be interesting to see how they shape the product offering around this, especially regarding the user experience. They have also developed their own blockchain and are using Move as the programming language, so it will be exciting to see if this sparks other innovations in the space and other companies exploring their open source technology. Within the Libra whitepaper, the focus is very clearly on improving financial inclusion and the prevalence of mobile technology in many of these regions. Therefore, I would expect a mobile-first offering which takes advantage of the user experience expertise many of these companies have. The ability for users to understand the offering and be able to easily purchase and trade Libra will be pivotal in the success of the project.”