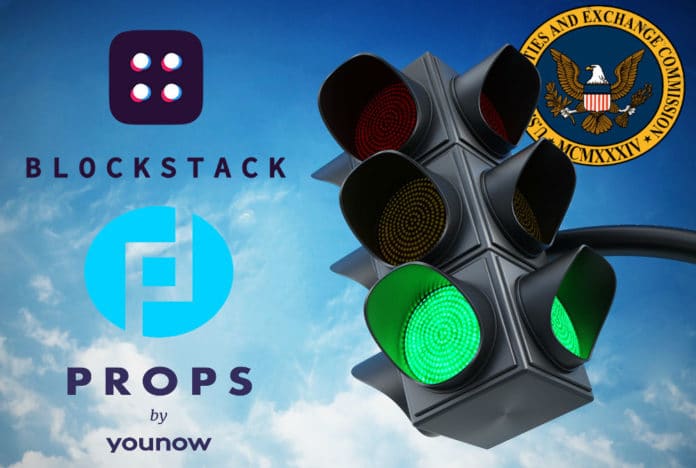 In the past week, two Regulation A+ security offerings made headlines after receiving an SEC green light, but what’s the difference between the projects?

The distinction lies in the offering details (and VC funding). Props and Blockstack both have a few items in common — blockchain, tokens, and venture capital funding — however, there is a fundamental difference between what the projects are fundraising for (and how they are doing).

BlockStack is a $28 million-dollar token offering, the first of its kind to receive SEC qualification. Blockstack’s decentralized platform has 165 applications built on it. The Wall Street Journal called it a “mini-IPO.”[1] That is a bit of a stretch, but Wall Street is learning how to stretch in all types of ways (thanks, blockchain).

An additional $12 million worth of Blockstack’s tokens will be allocated to an app mining program that delivers token rewards to the highest-ranked applications in the ecosystem.[2] Blockstack’s legal road to the SEC greenlight was not cheap, which Blockstack founders jokingly refer to as a “$2 million-dollar donation to the crypto industry.”

On the other hand, Prop Tokens are given as a reward to content creators on YouNow, a Delaware Public Benefit Corporation, which has a whopping 47 million registered users (just 1/6 the user count of our dear old friend Kik).[3] However, the general public was still second place to Venture Capital ($22 million of Props tokens presold to the likes of Union Square Ventures, Comcast, and Andreessen Horowitz). To be fair, Blockstack received some VC money, too, but only $5 million.

Props platform serves as a blockchain infrastructure abstraction that allows applications to integrate Props Tokens into a token-based loyalty program. Props Tokens brings the content creators of the internet one step closer to earning income for their work.

Now, both Blockstack and Prop Tokens are available to the general American public, including the USA. Welcome to the age of regulated crypto in America.

Josh Lawler, a partner at Zuber Lawler, is an experienced attorney with concentrations in M&A, finance, intellectual property, and general commercial transactions. This is not legal advice and the original article was published at Medium.