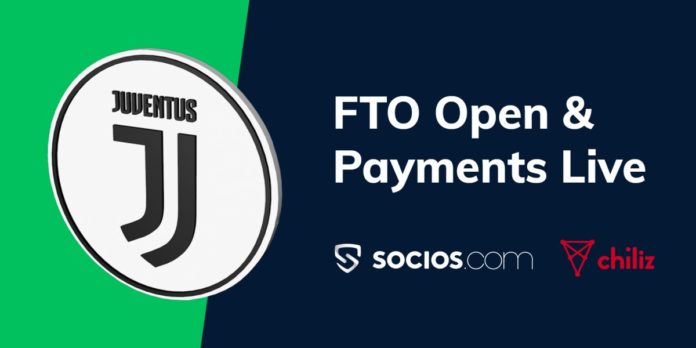 Chiliz has launched, what they claim, is the world’s first Fan Token Offering (FTO) for major international football club Juventus.

“We are proud to be the first Club to be activated by Socios.com on its platform, inaugurating a new way to interact with our fans around the world.

“This partnership shows once again how much technological evolution and innovation are two priorities for Juventus, also in the way we relate to and connect with our fan base. “

“The tokenization of Juventus is a seminal moment for football, but it’s also a huge step forward into the mainstream for blockchain and cryptocurrency. Through Socios.com, regular football fans are being introduced to cryptocurrencies, as well as a blockchain platform where they can take part in the club decision-making process using digital assets.

“The magic of our platform is that the user experience is very consumer-friendly. Fans will be able to adapt to Socios.com seamlessly and our potential global audience is huge, starting with the 423* million Juventus fans around the world.

“We are the first movers in this space; no one else has attempted to do what we’re doing because it’s an incredible undertaking. Our blockchain-based platform is going to fill a mainstream niche for increased consumer engagement in the digital age.  Our app has the potential like no other to be the lead driver in the mainstream adoption of blockchain technology.

“I look forward to witnessing the whole ideology of Socios.com brought to life when Juventus score their first goal at the Allianz Stadium in 2020 and 40,000+ fans in the stadium, and countless more around the world, celebrate to the tune of a song chosen by fans on our blockchain-based platform.

“Voting begins today – Juventus fans who want to get involved and take part in the decision-making process should download Socios.com and get their Fan Tokens now.”

Through Socios.com, their blockchain-based voting and rewards mobile app for the sports and entertainment industry, fans of the Turin-based giants can purchase $JUV (Juventus Fan Tokens), bespoke crypto assets that provide the right to vote on certain club decisions and earn rewards.

Bringing cryptocurrency directly to the heart of mainstream sports culture, and targeting a huge fan base of 423* million fans around the world, Juventus is the first football team to issue Fan Tokens. From today, fans can also immediately cast their vote on the first poll to be issued by the Serie A Champions on the Socios.com platform – to help decide which music should replace The Fratellis  ‘Chelsea Dagger’ as the song that is played every time Juventus score a goal at the Allianz Stadium.

The Serie A Champions will release a video across their channels to announce the launch and the first poll to be held on Socios.com. Images from this video are included.  Fans can choose from the following shortlist of four songs:

The winning song will be revealed when Juventus score their first goal at the Allianz Stadium in 2020. This will be the first of many polls to come this season and for many more seasons thereafter.

Socios.com also has a pipeline of dozens of clubs ready to join the platform; several leading football clubs and teams from other sporting verticals may be announced before the end of 2019.

In early 2020, Socios.com will launch the Marketplace feature, which will allow fans to trade Fan Tokens directly in the app. Social interaction will also be amplified with the addition of a chat function as well as club-specific games, allowing fans to compete in challenges.  Socios.com will also expand outside of sport and into entertainment in the future.

Socios.com is a first-of-its-kind blockchain-based mobile app for sports and entertainment fans. The app is available to download for Android, and a limited beta test version is available on iOS.   A full release via the App Store is imminent.