To truly build a decentralized world, It’s clear we really need more people to participate in blockchain projects in order to create more independent nodes and users. Traction is key.

The idea one can earn crypto by being part of a consensus system that rewards good behaviour with tokens is not new. But doing it on mobile on emerging protocols that will not be fueled on Proof of Work (PoW) but rather Trusted Circles for future nodes (like Pi) or just for using their App like Electroneum is fueling a new wave of excitement in the crypto arena. Of course you can always use other mining systems like Honey Miner.

Oh, and it’s free. Other than giving up your email and IP address. No upfront fees to participate. No subscription costs. So there’s nothing to lose.

The three projects at Electroneum, PiNetwork and Initiative Q have between one and seven million miners/users each and are creating the most buzz the crypto market has seen in some time.

The tease of being like early bitcoin (10,000 BTC pizza anyone?)  is working as a strategy for all three. And mobile mining is brainless. No effect on mobile phone performance. No wasted energy. Click once a day on Pi and once a week on Electroneum. Simple.

Initiative Q is driving massive adoption by taking a quasi-MLM strategy (early members win bigger and referrals are paramount) but all three offer tokens for bringing new people in. Aside from Electroneum, the others are not even liquid yet.

Electroneum, a fork of Monero, Electroneum (ETN) is a user-friendly, mobile-oriented cryptocurrency that can be mined on any smartphone running Android, allows transactions to be settled instantly via its Instant Payment System, and has nearly 2.5 million users around the world. They raised $40m US in their ICO and ETNs are already on exchanges.

Their mobile mining rewards users with free ETN every month. Users are able to mine up to $3 USD worth of ETN each and every month, which can be stored or spent with any retailer that accepts ETN.

For many in the developing world, where monthly income is often less than $50 per month, an additional $3 per month can make a significant difference to their daily lives, allowing them to have a little more each day. But it’s not enough perhaps for the upper class such as online stock brokers in the UK. 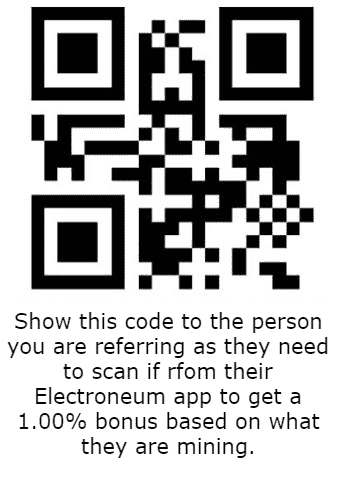 As an incentive for your referrals to use your code, they will also get a 1.00% bonus based on what they are mining.

In addition, referrals are for life. So every person you refer becomes a small but steady stream of passive income, provided they keep on mining.

Here’s a solid video on Electroneum that is fairly neutral.

Pi, planning to work on the Stellar Consensus Protocol, now has over one million mobile miners. It’s not on any exchanges yet, but people are making transactions already between $2 and $10 per Pi on promissory notes. The breakneck speed of Pi’s adoption across a diverse, global user-base reveals the expanding interest in cryptocurrency and the public desire to participate in a more inclusive digital economy.

From the Stanford Daily:

Instead of relying on the energy-intensive algorithm used by Bitcoin to verify users, Pi secures its ledger when members vouch for each other as trustworthy. By using social “security circles” instead of an intense algorithm, Pi can be used through a free application on a typical smartphone. These interlocking “security circles” create a global trust graph showing who can be trusted to record transactions. This approach allows users to contribute to crypto mining directly from their phone by leveraging their existing social connections, with no financial cost, minimum battery drain and a lighter footprint on the planet.

In an interview in the Stanford Daily, Fan said:

“Cryptocurrency and blockchains have the potential to decentralize financial and legal services in the same way that the internet decentralized information and media. Unfortunately, in their current state, most Cryptocurrencies remain out of reach of the everyday people who could most benefit from the technology.”

Though there’s no mobile mining (yet) and distancing claims by the founders from cryptocurrency and blockchain, Initiative Q is one to watch as well.

Initiative Q is an attempt by ex-PayPal guys to create a new payment system and though this is not mobile mining it has a lot of traction consider they don’t have much in terms of software or strategy.

Apparently it will not be based on blockchain for now, but on unspecified “new payment technologies”  and will be ‘partly’ centralized with a payment reversibility feature. Despite a polished website detailing its plans, exactly how Initiative Q will usher in the next era of digital payments has remained a mystery.

And this has led some to chastise in the media for being an MLM scam.

It seems the project’s founder Saar Wilf, who exited his former company to Paypal for $169 million in 2008, and economics professor at George Mason University, Lawrence White, have now convinced millions of people to fork over data for a seat at the table in “tomorrow’s payment network” along with an eventual hefty payout.

According to Wikipedia, Frank Chung of news.com.au wrote in October 2018, that the marketing style could be “perceived as a scam or pyramid scheme”, and Daniel Huszák of portfolio.hu compared it to multi-level marketing without the fee. Meanwhile, Owen Gough of Digital Spy wrote “Is Initiative Q real or fake? Short answer – we have absolutely no idea.”

In contrast, Brendan Markey-Tower, an economist at the University of Queensland, said on Stuff.co.nz in November 2018 that it was “not a scam” and that the scheme wouldn’t “make you fabulously wealthy. It is, nonetheless, an interesting idea.”

However, they did retort to the critics: 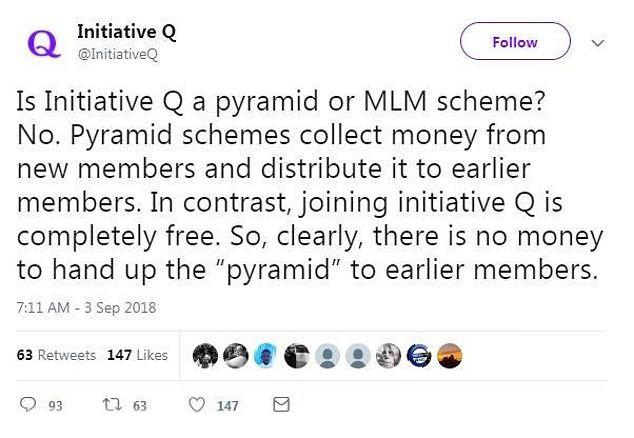 They are focussing on traction and an MLM structure.  Amazingly. Depending on which media you trust, the numbers are varied with two million,  five million, or seven million people in 180 countries that have reportedly signed up for Initiative Q. In their economic model, Initiative Q proposes that their two trillion Q tokens will eventually have $2 trillion of value — bootstrapped by the payment network.

But as writer David Gerard notes:

“Bitcoin bootstrapped itself up from nothing to thousands of dollars per bitcoin, with its only real market use case – being drugs on the darknet. So stranger things have happened.”

“But if this new system is neither a cryptocurrency nor based on the blockchain, why talk about Initiative Q?

Simple: the target of Initiative Q is almost identical to that of many cryptocurrencies since it aims at appealing to the same users interested in the crypto world. In addition, the fact that Initiative Q is not crypto makes it a unique and different product, more attractive to those who just entered the world of digital currencies.”

They are certainly supported by a top-notch economic advisory board.

If you are interested in other alternatives there are other crypto mining offerings but bear in mind, Bitcoin has a hard-coded currency unit limit of 21 million, and the current difficulty is such that most phones will take months to generate a fraction of a Bitcoin. And trying to mine Bitcoin or other Altcoins that use Proof of Work using mobile miners can allegedly damage some phones. However, MinerGate Mobile Miner offers an app that enables you to mine for multiple altcoins besides Bitcoin such as Monero, Dash, DigitalNote, MonetaVerde, and QuazarCoin. The app also provides a built-in wallet, where users can store their hard-earned coins.