Deloitte has rolled out its bullish 16-page report and viewpoint on Facebook's Libra Project, calling it a bold new proposition designed to create foundational financial infrastructure with a potentially unprecedented scale and reach that would uniquely differentiate Libra.

Libra is a payment tool put forward by Facebook that seeks to facilitate a more connected global payment system, remove inefficiency in global money movement and commerce, and foster financial inclusion and economic participation. The currency and network do not yet exist, and only rudimentary code has been released. The launch is planned to be sometime in 2020. But on July 15, 2019, Facebook announced the currency will not launch until all regulatory concerns have been met and Libra has the “appropriate approvals”.

The project, currency and transactions are to be managed and cryptographically entrusted to the Libra Association, a membership organization of companies from payment, technology, telecommunication, online marketplace and venture capital, and nonprofits.

From the Deloitte report:

“Implementation of anything as ambitious and far-reaching as the Libra Project would require resolution of a full panoply of issues that are both granular and not so granular, and certainly too numerous to list. But any undertaking that aims to disrupt the status quo, and potentially increase competition and choice for consumers, should be hard work to develop and achieve widescale acceptance. Such cases have emerged in the past where something new upends current thinking and ways of doing things. The Libra initiative is expected to follow a similar path as it traverses the journey from idea to fully realized promise.”

The figure below shows how the Libra digital asset compares to other monetary systems in terms of governance, transparency, and accountability. 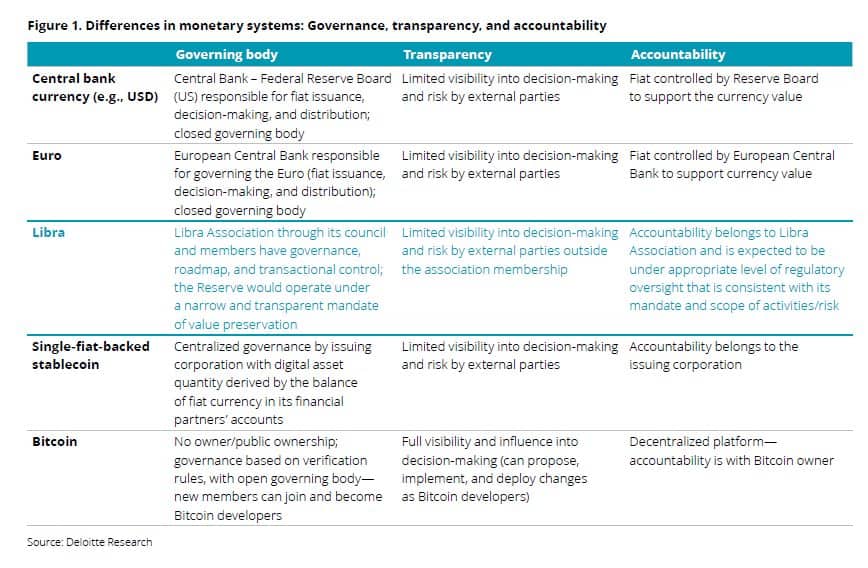 According to Deloitte, the fuller Libra Project ecosystem is expected to include players who may have a direct participatory role in the daily operation of the Libra Network, including the Association, Association members, developers, merchants, and users. Other players—including regulators, central banks, and financial services institutions—would also play a critical role in the long-term success of the Libra digital asset. 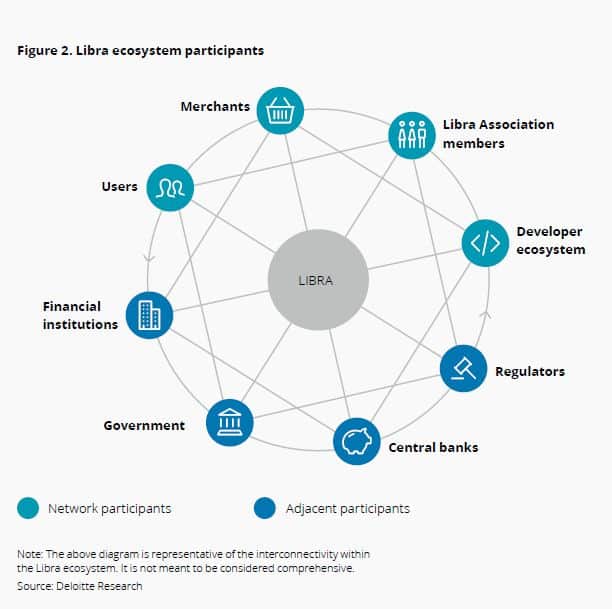 Serving the underserved is weighted in the Deloitte report focussing on the idea that innovation within the Libra context should also mean financial inclusiveness for the world's  “unbanked” and “underbanked” – or those who exist on the fringes of the global banking and economic systems, by providing a transparent and easy-to-use framework, and to streamline the Know Your Customer (KYC) identification process, which could facilitate reaching the underserved and could enable a still wider reach even within the traditional banking constituency.

But the road has been rough – Libra has had its fair share of problems, kicking off well, but then suffering as a plethora of initial backers backed out around the time that some members of the US Congress started to hammer Mark Zuckerberg, the CEO of Facebook on the project. Then some major players stampeded away – with PayPal, eBay, Mastercard, Stripe, Visa, Mercado Pago and Bookings Holdings all leaving the project over 2019. Other than Mark Carney from the Bank of England,  other central banks have also opposed the project.

The Project's governing body, the Libra Association and its dwindling membership are part of a larger ecosystem of merchants, users, developers, financial institutions among others, who will likely be pivotal in making the Project successful.

“Despite all of the advancements it has expected, the existing financial infrastructure seems to remain a constraint in an increasingly quickening global ecosystem in which information travels faster, work is increasingly virtual, and geographical borders are fading away,” said Linda Pawczuk, principal, Deloitte Consulting LLP and U.S. and global consulting blockchain leader.

The current efforts of the Project reflect an attempt to set up an inclusive, and transparent collaboration across many jurisdictions. The proactive attempt at regulatory and political scrutiny of the Libra initiative has created awareness and momentum in the form of dialogue and pushbacks around the role of digital assets in the global economy.