The cryptocurrency market has had an apocalyptic crash over the past 48 hours, with the coronavirus Covid-19 triggering a massive selloff in global markets.

According to writer Trevor Smith at Bitcoinist.com, a massive dump by Plus Token scammers kicked off the crash after dumping 13,000 Bitcoin over the weekend which sparked the initial sell-off. Plus Token closed down the operation in June of 2019 withdrew over $3 Billion dollars in Cryptocurrencies (Bitcoin, Ethereum and EOS) and left the message, “Sorry we have run“. 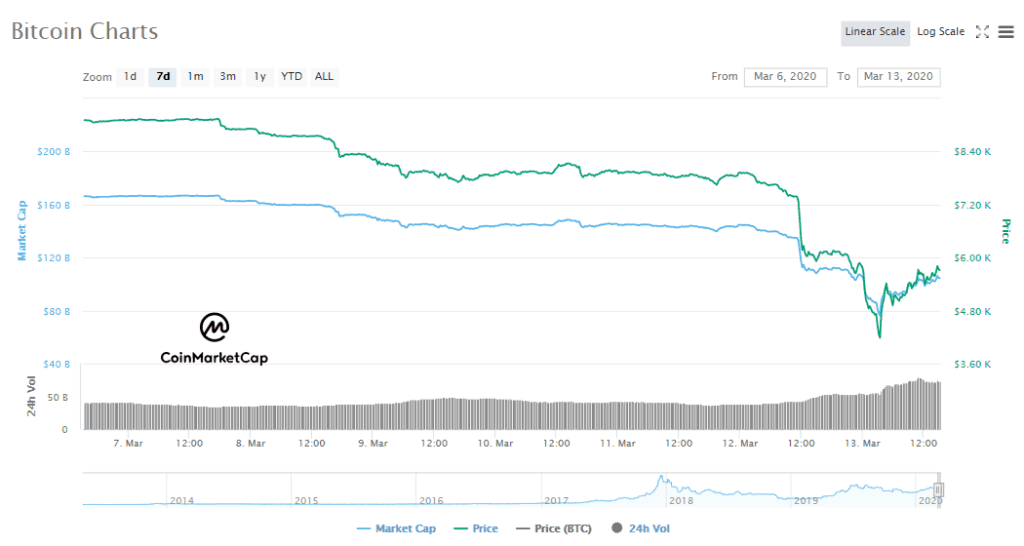 “The question isn’t whether bitcoin is a store of value today in an unprecedented medical crisis that even sucked the value out of gold and silver, which have been flights to safety for thousands of years,” said Transform Group and BitAngels founder Michael Terpin.

“It’s whether it will hold value over the coming ten years vs gold, silver, USD and the S&P, which it has resoundingly trounced thus far. On that count, I remain bullish and believe anything under $6k is a buy and under $4k was a screaming buy over the long term. And unlike the S&P, you won’t have to wait a decade for new highs. Check back on bitcoin in about 18-24 months.”

“What we have seen in the last 24 hours does not prove that Bitcoin is not a safe haven; only that BTC’s investor base isn’t broad enough yet to prove its function as a safe-haven. The traders, risk-takers, and speculators that are dumping their equities are the same ones selling their crypto.”

“In a panic as severe as this one, investors are racing to safety in the form of cash, but under the surface of liquidations in the futures and options markets there still is a growing and broadening the base of users who believe that all roads lead to decentralization and that BTC & ETH are the horses who are going to get us across the finish line.”

Cryptocurrencies saw $93.5 billion wiped off value in 24 hours as bitcoin crashed and dragged the sector down with them.