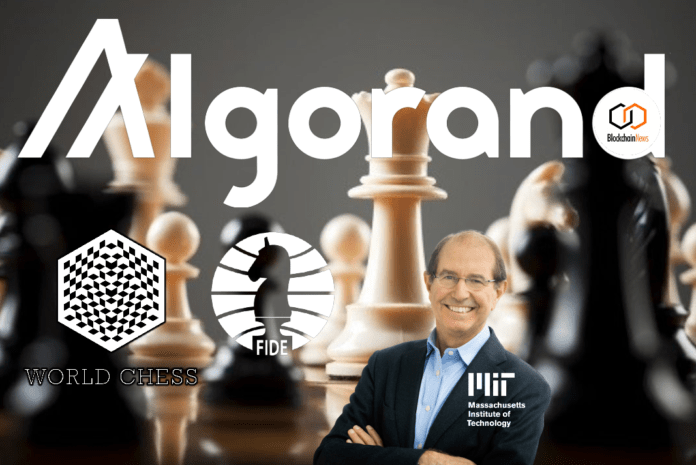 This promises to bring reliability and transparency to the rating system of digital chess.

“We are beyond thrilled to partner with FIDE Online Arena and World Chess to bring digital chess ratings onto the Algorand blockchain for the first time,” said Sean Ford, COO of Algorand. “This historic moment brings the blockchain community one step closer to mainstream adoption, as a widely popular competitive game like chess leverages distributed ledger technology to serve as the official record for the trust of millions of online chess players and fans.”

Coming on the launch of digital chess games by FIDE Online Arena, millions of chess ratings from players all around the world will be recorded on the Algorand blockchain for the first time ever, and universally accessible to all other chess platforms and media sites, making this a momentous event for both the digital chess and blockchain communities.

Algorand’s open, public blockchain brings full transparency and automation to the digital chess ecosystem. As player ratings will be verified on the blockchain, results reporting will be reliable and secure from fraudulent activity. With the Algorand protocol removing friction from the existing model, millions of global chess players will have access to transparent reporting to one of the world’s most popular games. Algorand’s public ledger provides enterprise-grade scalability to accommodate digital chess organizations’ need to verify ratings for the hundreds of millions of chess players globally. The combination of transparency, security and scalability make Algorand the preferred platform for reliable and transparent reporting in the digital gaming ecosystem.

Six months after World Chess, the designer of the online chess experience and the company that organized the 2016 and 2018 Championship matches, announced a hybrid IPO on Algorand, World Chess is leveraging the Algorand blockchain to further develop inclusive and modern gaming opportunities for millions of chess players around the world, including rewards and incentives for the chess community, internal currency and blockchain-based live betting.

“It’s exciting to continue bringing innovation to chess,” said Ilya Merenzon, CEO of World Сhess.  “The advent of digital games on the internet made chess more popular than before, and now we can’t wait to further explore blockchain innovation for digital chess.”

World Chess will be hosting a virtual game on June 17 where renowned player Sergey Karjakin and Turing Award-winning cryptographer and Algorand Founder, Silvio Micali will face off in a match. Viewers will be able to witness the first-ever recorded digital chess ratings on the blockchain.

Algorand built the world’s first open-source, permissionless, pure proof-of-stake blockchain protocol for the next generation of financial products. This blockchain, the Algorand protocol, is the brainchild of Turing Award-winning cryptographer Silvio Micali. A technology company dedicated to removing friction from a financial exchange, Algorand Inc. is powering the DeFi evolution by enabling the creation and exchange of value, building new financial tools and services, bringing assets on-chain and providing responsible privacy models.