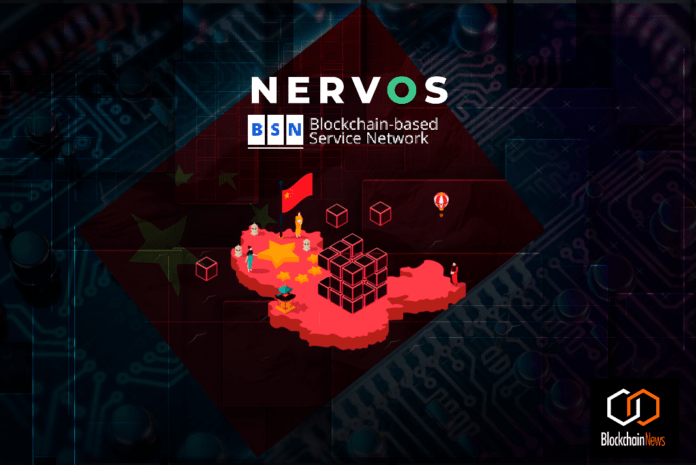 Nervos is officially integrating with China’s Blockchain-based Services Network (BSN) (Chinese version) and (English version) as the first public blockchain to join a network which so far has only supported permissioned blockchain frameworks like HyperLedger Fabric, Baidu’s XuperChain, and CITA.

The integration will go live in August with the launch of BSN’s new International Portal, which will cater to global users and provide them with access to low-cost blockchain solutions.

“By bringing together the leading blockchain frameworks into one shared gateway, BSN has the potential to drive blockchain development and adoption at a pace and scale we haven’t previously experienced,” said Kevin Wang, co-founder of Nervos. “The integration of permissioned and permissionless blockchains is our vision for the future of Nervos, so we’re thrilled to become the first public chain to integrate with BSN.”

BSN’s support for Nervos and other public blockchains marks an expansion of its global strategy as BSN continues to promote the development and universal adoption of blockchain technology. Currently, BSN’s China Portal only supports permissioned blockchains due to local regulations, but its new International Portal will provide global users with direct access to top public blockchain networks like Nervos.

BSN is bringing together the top blockchain-based solutions into a dedicated global public infrastructure network and provides it at low cost to enable developers to build on the new decentralized internet.

At launch, BSN will run Nervos nodes on its global city nodes, making the Nervos blockchain and Nervos applications available to millions of potential users and developers through the International Portal. Blockchain developers will be able to access the Nervos network through the international BSN gateway, deploy smart contracts, and execute globalized blockchain services on Nervos. Nervos will also establish its own BSN portal to manage developers and decentralized applications (dApps).

Nervos expects its integration with BSN to greatly reduce the complexity of accessing dApps and bring a large number of applications and developers to its network. By combining the benefits of both permissioned and permissionless blockchain networks, Nervos’ integration with BSN will help increase blockchain adoption and utilization for a much wider variety of use cases than previously possible.

Nervos was chosen as one of BSN’s first public blockchain partners because of its ability to balance trust and security with scalability and performance via its unique layered architecture. Its layer one solution, the Nervos CKB, is a permissionless, proof-of-work (PoW) blockchain that improves on the innovations of first-generation public chains like Bitcoin and Ethereum. Nervos’ layer two is an application layer for performance, privacy, and diversity, which provides unlimited scalability for dApps.

In addition to its innovative infrastructure, Nervos’ founding team is highly regarded as one of the top technical blockchain teams in China, with deep ties and connections in the enterprise space. Nervos was previously selected by China Merchants Bank International (CMBI) to help build decentralized finance (DeFi) applications and partnered with Huobi to co-develop a regulator-friendly public DeFi chain.

Nervos is a collection of protocols and public blockchain ecosystem that aims to solve the biggest challenges facing blockchains like Bitcoin and Ethereum today. The Nervos layer 1 is a proof of work, public permissionless blockchain protocol that allows any crypto-asset to be stored with the security, immutability, and permissionless nature of Bitcoin while enabling smart contracts and layer 2 scaling. Its unique crypto-economic model is designed to better align the interests of users, developers, and miners as compared to first-generation blockchains.