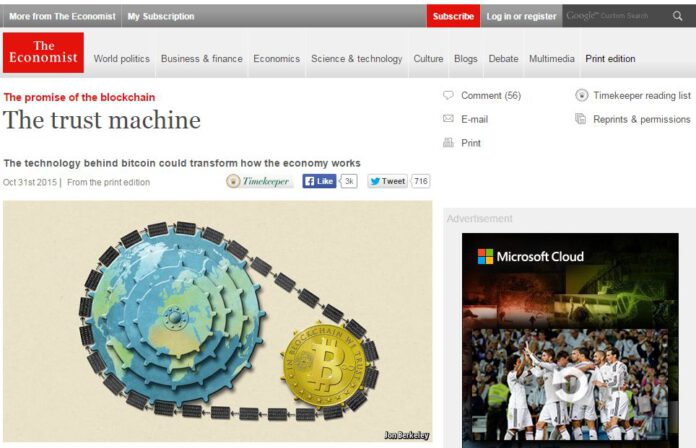 When The Economist writes on its cover that bitcoin tech could change world, it means we’re getting to the next phase of the Gartner Hype Cycle (the slope of ENLIGHTENMENT phase).

Blockchain is catching the financial world afire – and its both a threat and an opportunity – the latter seemingly being the more powerful. With the blockchain decentralising trust, there’s little need for companies, agencies and organisations that rely on being trust agents in the market in order to operate. That’s probably the reason that R3CEV, an organisation for banks and blockchains has mushroomed from under ten to 25 Global Banking Partners Strong in a matter of weeks.

The Economist provides yet one layer of credibility more that’s for certain… but when Canadian tech guru Don Tapscott (bestselling author of Wikinomics) comes out with his new book in April on The Blockchain called The Trust Protocol: How Blockchain Technology is Changing Money, Business and the World – Blockchain theory and technology is surely going to really penetrate the Zeitgeist.

More from the Economist article:

The spread of blockchains is bad for anyone in the “trust business”—the centralised institutions and bureaucracies, such as banks, clearing houses and government authorities that are deemed sufficiently trustworthy to handle transactions. Even as some banks and governments explore the use of this new technology, others will surely fight it. But given the decline in trust in governments and banks in recent years, a way to create more scrutiny and transparency could be no bad thing.

Drawing up regulations for blockchains at this early stage would be a mistake: the history of peer-to-peer technology suggests that it is likely to be several years before the technology’s full potential becomes clear. In the meantime regulators should stay their hands, or find ways to accommodate new approaches within existing frameworks, rather than risk stifling a fast-evolving idea with overly prescriptive rules.

The notion of shared public ledgers may not sound revolutionary or sexy. Neither did double-entry book-keeping or joint-stock companies. Yet, like them, the blockchain is an apparently mundane process that has the potential to transform how people and businesses co-operate. Bitcoin fanatics are enthralled by the libertarian ideal of a pure, digital currency beyond the reach of any central bank. The real innovation is not the digital coins themselves, but the trust machine that mints them—and which promises much more besides.