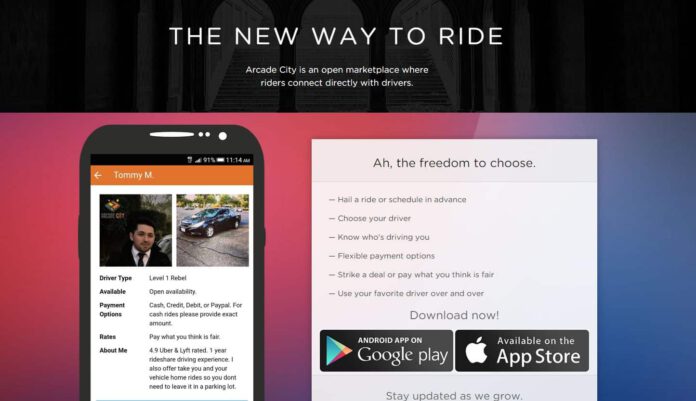 New driver-owned ride-sharing startup Arcade City launched its mobile app this month to the Apple and Android app stores. Drivers have given more than 1,000 rides to customers in 100+ cities across 27 states, and Australia.

Arcade City will use Ethereum to issue ‘crypto-equity’ to drivers, allowing them to own up to 100% of the company by 2020.

Launched in the aftermath of dramatic rate cuts by Uber and Lyft that decimated driver take-home pay up to 40% overnight with no warning, Arcade City quickly signed up more than 3,000 drivers, most of them current or former drivers for the ‘big two’ ride-sharers.

Arcade City lets riders review driver profiles in advance and choose the driver they prefer. Drivers are free to set their own rates and offer additional services like deliveries or roadside assistance. Approximately half of current drivers give rides on a ‘pay what you think is fair’ basis.

“The Achilles’ heel of Uber and Lyft is their centralized management of pricing,” said Arcade City founderChristopher David, a former Uber driver. “By decentralizing that decision to the level of the driver and rider, Arcade City frees the driver to be an entrepreneur, and empowers the rider with control over their entire experience. Both drivers and riders are loving it so far.”

“Uber and Lyft treat drivers terribly, like numbers in an algorithm,” said David. “To them drivers are just a temporary nuisance, to be replaced with self-driving cars at the earliest opportunity. They even hide that fact from the drivers. But drivers are beginning to wake up to reality – and actively search for an alternative.”

Drivers are also active in Australia, with Mexico, Canada and Sweden launching in the spring.

Facebook
Twitter
Pinterest
WhatsApp
Previous articleAirbnb Co-Founder Eyes Blockchain Tech for User Reputation And Trust
Next articleOverstock.com Announces Historic Blockchain Public Offering
Richard Kasteleinhttps://www.the-blockchain.com
In his 20s, he sailed around the world on small yachts and wrote a series of travel articles called, 'The Hitchhiker's Guide to the Seas' travelling by hitching rides on yachts (1989) in major travel and yachting publications. He currently lives in Groningen, the Netherlands where he has set down his anchor to raise a family and write. Founder and publisher of industry publication Blockchain News (EST 2015) and director of education company Blockchain Partners (Oracle Partner) – Vancouver native Richard Kastelein is an award-winning publisher, innovation executive and entrepreneur. He has written over 2500 articles on Blockchain technology and startups at Blockchain News and has also published in Harvard Business Review, Venturebeat, Wired, The Guardian and a number of other publications. Kastelein has an Honorary Ph.D. and is Chair Professor of Blockchain at China's first blockchain University in Nanchang at the Jiangxi Ahead Institute software and Technology. He has over a half a decade experience judging and rewarding some 1000+ innovation projects as an EU expert for the European Commission's SME Instrument programme as a startup assessor and as a startup judge for the UK government's Innovate UK division. Kastelein has spoken (keynotes & panels) on Blockchain technology at over 50 events in 30+ cities.