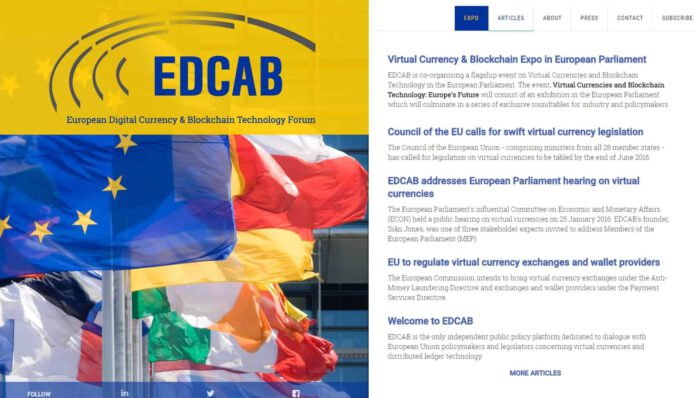 Traditional financial services players such as Barclays and c joined leaders from the virtual currency and Blockchain world, to meet with policymakers from across the EU institutions in a series of roundtables organised by the European Digital Currency & Blockchain Technology Forum (EDCAB) in the European Parliament.

Participants were also joined by the World Bank, IMF, the Bank for International Settlements, OECD, the European Securities and Markets Authority and Europol to discuss how to best to develop an optimal regulatory framework for the nascent sector.

The roundtable series comes at an important time. Virtual currencies have rapidly risen up the European policy agenda in all the major institutions. On Tuesday, the European Parliament’s Economic and Monetary Affairs Committee discussed their report on future regulation of the European virtual currency and Blockchain industry. The influential Internal Market and Consumer Protection Committee also met yesterday and today to review and discuss amendments to their opinion on the report.

“As the only independent European public policy platform for virtual currencies and distributed ledger technology, EDCAB is delighted to be playing a leading role in shaping discussions between industry and policymakers in order to secure a sound regulatory and policy landscape”.

The sector has benefited from cross party support and roundtables were well attended with participants from all European institutions.

Syed Kamall MEP, Chair of the European Conservatives and Reformists Group opened discussions on ‘Virtual currencies: The future of money’:

“I believe that it is essential that we don’t just discuss these issues behind closed doors but open these debates up to everyone. If we get it right,  Blockchain and virtual currency technologies offer us many opportunities, not just for institutions but also for individuals and we need to make sure they are part of that debate”.

“The technology is there and the opportunities and challenges must be faced and embraced as a priority. As part of this I have asked for a separate report of the INTA Committee to ensure that the groundbreaking potential of the technology is fully embraced.”

“We look to work with industry to inform us on this important issue. There is a consensus in the Parliament, that policymakers should be careful not to regulate the technology out of existence”.

The roundtables demonstrated clear appetite from both policymakers and industry to work together to achieve positive outcomes for the sector.

“EDCAB looks forward to continuing to facilitate informed and engaging on all live issues and future policies which will impact this rapidly developing sector. We are monitoring events closely and will continue to build upon established relationships with stakeholders across institutions to ensure the right outcomes for the sector and the citizens it serves”.