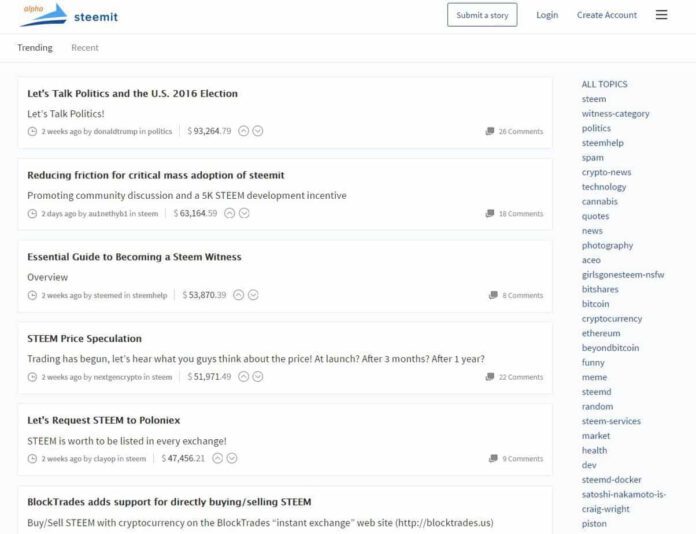 Steemit, the social media platform where everyone gets paid to post online, has just rolled out it’s BETA. Led by CEO Ned Scott, formerly in private equity, and CTO Dan Larimer, the creator of Bitshares – Steemit today released a publicly available beta version of a social media content aggregator designed to reward content creators and curators with cryptocurrency.

CEO and Co-Founder Ned Scott said the reason he created this system was to build a community, incentivize them to contribute, and improve the quality of original content.

“Our vision is to not only build an empowered community but give content creators an avenue to make money online without needing to advertise,” said Scott.

Steemit, which is powered by Blockchain technology, uses forms of a new currency called Steem to reward users that upload articles, images, commentary and blogs, while rewarding users for sourcing and upvoting popular content. The earlier a person up-votes a post that becomes popular, the more they are rewarded. Users are paid half in “Steem Power,” a vesting currency that supercharges voting power, and half with Steem Dollars, which can be exchanged for USD.

Steemit’s peer-to-peer social economy, is open to anyone around the world. Users can earn Steem, use it as voting power, and exchange it for USD. The technology behind Steemit is open source and available to be viewed and expanded upon by others.

“Steemit is a brand new way to recognize contributors online, especially those who join our community early and stay long term. New users will be given a portion of Steem when they sign up and those who initiate or improve the quality of discussions, through persuasiveness, clarity, grammar and formatting, will be upvoted faster and more appropriately rewarded.

“Steemit is easy and fun to use, and is the best opportunity for the regular consumer to earn and accumulate cryptocurrency,” added Larimer.

“The versatility of the Blockchain has allowed us to create an incentivized social media platform to exchange conversation, creativity, empowerment, and value. We want to promote dynamic, creative dialogue and debate with an opportunity to earn,” said Scott.

Steemit expects significant user growth from May until their first major reward issuance on July 4. Steem is currently trading at the US based crypto-exchange, Bittrex.com and at the Blockchain based ledger, Openledger.info. Steemit will also soon be available on mobile app.