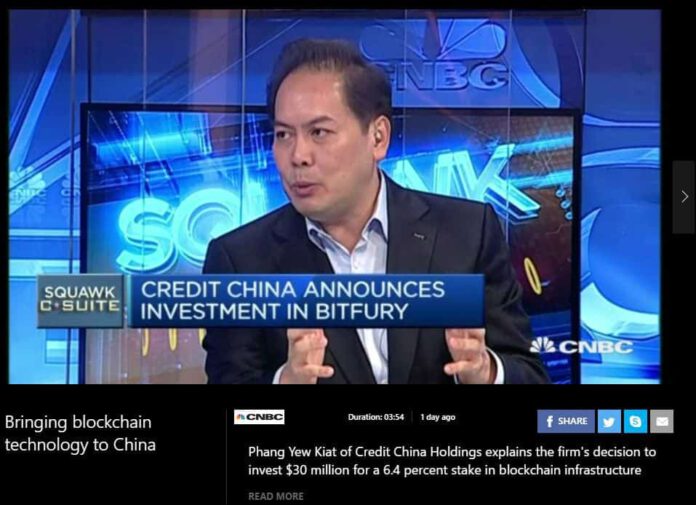 Leading integrated short-term financing services provider in Eastern China, Credit China Holdings Limited Vice-Chairman and Chief Executive Officer Yew Kiat Phang has recently stated in the Chinese Media that China will work with the Blockchain company BitFury to form a joint venture in China to study how to apply Blockchain technology in the country.

According to the CEO, they will start first to cover the main concepts, and then to move on to implement Blockchain into various markets in China. They must obtain approval from the People’s Bank and other regulatory bodies but they expect that to be cleared over the next year.

Phang said that the current government has begun to understand the multi-faceted Blockchain technology starting with the People’s Bank in 2014 exploring how to develop the use of electronic money of which blockchain is a key part of the technology.

In 2015, 13 per cent of all payments in China were made by mobile phone achieving over130 billion transactions, an increase of 200 per cent over 2014. The transaction amount reached 100 trillion yuan size with a growth rate of 350 per cent.

BitFury is the leading, fully integrated Bitcoin infrastructure provider and Blockchain transaction processing company with offices in San Francisco and Amsterdam. The company  develops and delivers both the software and the hardware solutions necessary to transfer highly secured applications on private and public blockchains.