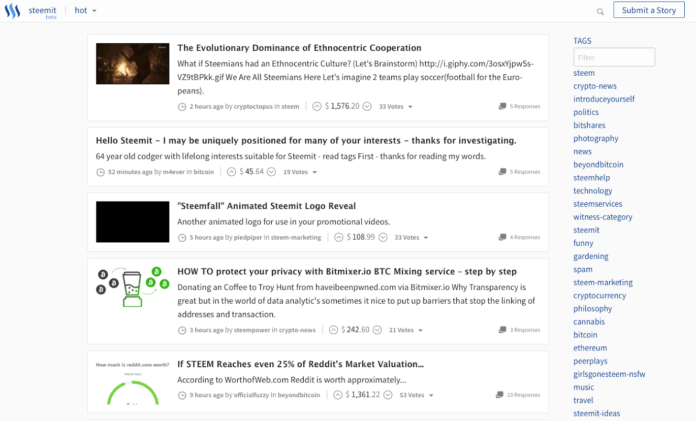 Steemit, the decentralized social media platform where users get paid to post and vote, and it’s, has exploded in popularity in its first month with a 1600% increase in community size since launch. Thus far, the online Steemit community (Reddit-like website) has doubled in membership every week, and the cryptocurrency its users are rewarded in, Steem, has increased its market cap of $7 million to $17 million USD.

CEO Ned Scott said he is blown away by how quickly the Steemit platform is changing the online experience.

“We have worked so hard to perfect Steemit and give anyone an opportunity to make money by creating and curating good content. Based on reactions from experts and testing from our consumers, we knew that the reception would be strong, but Steemit is so much further along than where we thought it would be. In about a month, the market cap of Steem has increased two and a half times, page sessions have jumped by nearly six times, and the Steemit Blockchain is now seeing twelve transfers, posts or votes every minute on average. These are phenomenal numbers and we are excited that our growing community is engaging in a fun and potentially lucrative social medium.”

Steemit is powered by an open source Blockchain called Steem, and its users are rewarded when they submit their blog posts or vote on articles, images and commentary that become popular. Users are paid half in “Steem Power,” a token that supercharges voting power, and half with Steem Dollars, a token worth about one USD. Currently, there are over 100 posts valued at $2000 worth of Steem, and the top 20 posts have an average payout of a combined $8,500 for posters and voters.

“Due to the increased number of entrepreneurs building social media apps integrating with Steemit and the Steem Blockchain, we are proud to announce that we are open-sourcing the code for the Steemit web wallet and social media interface. We are seeing incredible demand from early adopters and innovators bridging the technology to other social platforms such as Reddit, Twitter and WordPress. Having our technology freely available will empower entrepreneurs to extend upon the Steem Blockchain and further revolutionize how social media can reward users and creators,” Scott added.

Since Steemit’s launch, its most popular topics include politics, technology and cryptocurrency, as well as ‘introduceyourself’, news, art and comedy.

“The Steem Blockchain will be rewarding all Steemit users for their contributions on July 4, distributing 10% of its total token supply,” Scott said.

To sign up or learn more about Steemit, visit Steemit.com

Facebook
Twitter
Pinterest
WhatsApp
Previous articleSingularDTV to Produce Singularity-based Sci-Fi TV Series for Ethereum Blockchain
Next articleUS Department of Homeland Security Funds Half a Dozen Blockchain Research Projects
Richard Kasteleinhttps://www.the-blockchain.com
In his 20s, he sailed around the world on small yachts and wrote a series of travel articles called, 'The Hitchhiker's Guide to the Seas' travelling by hitching rides on yachts (1989) in major travel and yachting publications. He currently lives in Groningen, the Netherlands where he has set down his anchor to raise a family and write. Founder and publisher of industry publication Blockchain News (EST 2015) and director of education company Blockchain Partners (Oracle Partner) – Vancouver native Richard Kastelein is an award-winning publisher, innovation executive and entrepreneur. He has written over 2500 articles on Blockchain technology and startups at Blockchain News and has also published in Harvard Business Review, Venturebeat, Wired, The Guardian and a number of other publications. Kastelein has an Honorary Ph.D. and is Chair Professor of Blockchain at China's first blockchain University in Nanchang at the Jiangxi Ahead Institute software and Technology. He has over a half a decade experience judging and rewarding some 1000+ innovation projects as an EU expert for the European Commission's SME Instrument programme as a startup assessor and as a startup judge for the UK government's Innovate UK division. Kastelein has spoken (keynotes & panels) on Blockchain technology at over 50 events in 30+ cities.