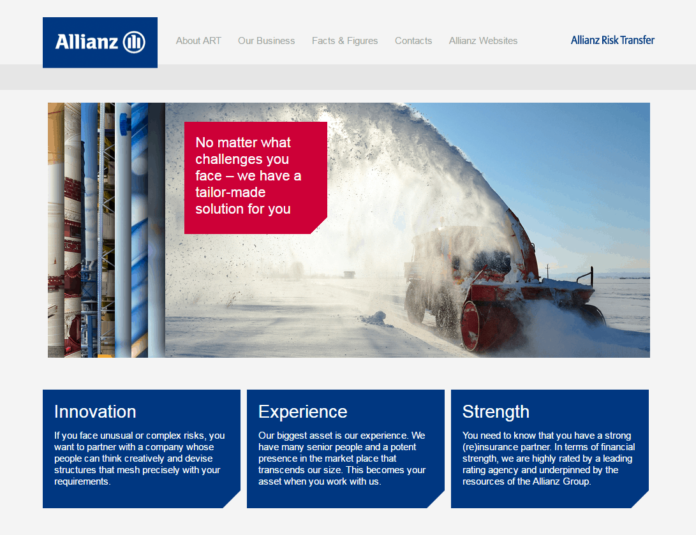 Allianz Risk Transfer and Nephila Capital Limited have successfully piloted the use of Blockchain smart contract technology for transacting a natural catastrophe swap. The test run not only demonstrates that transactional processing and settlement between insurers and investors could be significantly accelerated and simplified by Blockchain-based contracts, but also points to other benefits such as increased tradability of cat bonds and wider opportunities to apply this technology in other insurance transactions.

“Blockchain technology would increase reliability, auditability and speed for both cat swaps and bonds as less manual processing, authentication and verification through intermediaries is required to confirm the legitimacy of payments/transactions to and from the investors,” explains Richard Boyd, Bermuda-based Chief Underwriting Officer of ART. “By replacing the human interventions which are currently embedded throughout the entire risk transfer process, frictional delays and the risks of human error are completely removed – with a radical effect on the speed and efficiency of the process and, in the case of bonds, on the tradability of such securities.”

So-called catastrophe or ‘cat’ swaps and bonds are financial instruments which transfer a specific set of risks, typically natural disaster risks such as hurricanes or typhoons, from an insurer to investors or other insurers utilizing triggers with defined parameters. In the case of a financial cat swap, the insurer pays a third party to assume the financial risk of a defined catastrophe event such as a Florida hurricane in exchange for a payment or series of payments. If the event occurs and meets the pre-defined trigger criteria, the third party is responsible for the pre-agreed financial risk.

Cat bonds follow a similar approach but with multiple parties assuming the catastrophe exposure through a securitized financial instrument in which the parties invest. If a qualifying cat event occurs, the investors lose all or part of the principal they have invested; if not, they receive interest in the form of a periodic ‘coupon’ payment as well as the return of their principal investment at the bond’s maturity.

Blockchain-based smart contract technology has the potential to facilitate and accelerate the contract management process of such cat swaps and bonds. Each validated contract on the open shared infrastructure contains data and self-executable codes inherent to that contract. When a triggering event occurs which meets the agreed conditions, the Blockchain smart contract picks up the predefined data sources of all participants, and then automatically activates and determines payouts to or from contract parties.

Blockchain is the technology underlying the bitcoin digital currency but its applications in cryptocurrency, smart contracts and distributed ledgers are being explored throughout the financial services industry. The smart contract technology allows digital execution of contracts with automated and distributed ledgers which are designed to be incorruptible, thus having the potential to significantly reduce the arbitration and validation functions traditionally performed by independent third party institutions such as banks, intermediaries and administrators, auditors and clearing houses.

ART and Nephila have worked with a number of firms to develop the proof of concept and see extensions of this technology having relevance across the insurance industry: for example, in optimizing the payment processes involved in international fronting for captive insurers, where multiple process steps are involved in transferring premium from a corporate to its own subsidiary.

“We believe technology will drive the future of insurance. We have invested a great deal accordingly and are pleased to extend our long-standing strategic partnership with ART to use of the Blockchain.”

“In our journey to become more digital, Blockchain promises to help us create more transparent, more convenient and faster services for our customers,” says Solmaz Altin, who is driving the digital transformation of Allianz Group as Chief Digital Officer. “Blockchain is obviously a fascinating technology and we are starting to explore the use of it in several fields,” says Michael Eitelwein, Head of Disruptive Technology of Allianz Group.