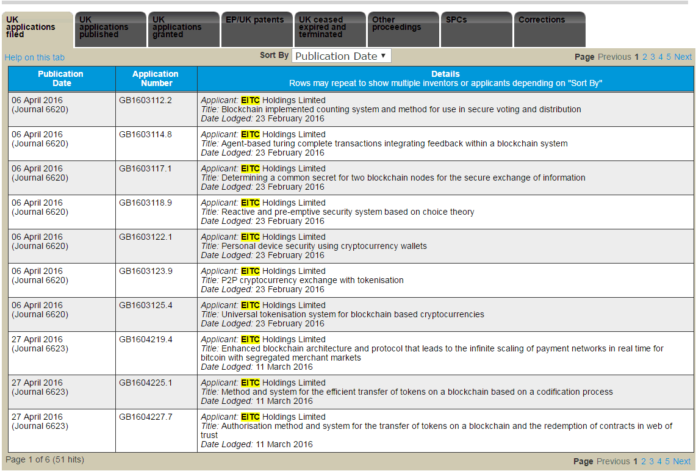 Craig Wright, the Australian who claimed to be the inventor of Bitcoin, but failed to come through with final proof that he was Satoshi Nakamoto, is attempting to build a large patent portfolio around the digital currency and technology underpinning it, according to associates of his and documents reviewed by Reuters. He’s now being called a ‘Patent Troll’ by some for filing over a billion dollars worth of Blockchain patents. The Bitcoin community is up in arms.

Since February, Wright has filed more than 50 patent applications in Britain through Antigua-registered EITC Holdings Ltd, which a source close to the company confirmed was connected to Wright, government records show.

Interviews with sources close to EITC Holdings Ltd, which has two of Wright’s associates as directors, confirmed it was still working on filing patent applications and Britain’s Intellectual Property Office has published another 11 patent applications filed by the company in the past week.

“None of this has stopped,” one person close to the company said. The person declined to be identified because they were not authorized to speak to the media.

A patent schedule, one of a number of documents relating to the applications shown to Reuters by a person close to the EITC Holdings, outlines plans to apply for about 400 in total.

In May 2016, a skeptical bitcoin community gave Wright certain tasks to prove that he was in fact Satoshi Nakamoto, but he bailed out and never came through with his promise to provide further proof.

Over the weekend, a long article on Craig Wright written by by novelist and journalist Andrew O’Haga at the London Review of Books (LRB) also said that they were working on filing several hundred patents.

…Wright had been working on new applications of the blockchain technology he had invented as Satoshi. He was, in other words, using the technology underlying bitcoin to create new versions of the formula that could, at a stroke, replace the systems of bookkeeping and registration and centralised authority that banks and governments depend on. Wright and his people were preparing dozens of patents, and each invention, in a specific way, looked to rework financial, social, legal or medical services, expanding on the basic idea of the ‘distributed public ledger’ that constitutes the blockchain. This is utopian thinking, even by normal geek standards, but it’s a hot topic in computer science and banking at the moment, and hundreds of millions of dollars are being invested in such ideas. Thus: Matthews’s proposal.

…The plan was always clear to the men behind nCrypt. They would bring Wright to London and set up a research and development centre for him, with around thirty staff working under him. They would complete the work on his inventions and patent applications – he appeared to have hundreds of them – and the whole lot would be sold as the work of Satoshi Nakamoto, who would be unmasked as part of the project. Once packaged, Matthews and MacGregor planned to sell the intellectual property for upwards of a billion dollars. MacGregor later told me he was speaking to Google and Uber, as well as to a number of Swiss banks. ‘The plan was to package it all up and sell it,’ Matthews told me. ‘The plan was never to operate it.’

The BBC has also picked up on the story:

…O’Hagan shows us something rather different – a man under intense pressure from business associates who stood to profit from him if he could be shown to be Nakamoto.

These people had signed a deal with Dr Wright in June last year, which saw them pay off his debts, including legal fees incurred in a battle with the Australian tax authorities.

Then, they had a plan for him.

“They would bring Wright to London and set up a research and development centre for him, with around 30 staff working under him,” O’Hagan writes.

“They would complete the work on his inventions and patent applications – he appeared to have hundreds of them – and the whole lot would be sold as the work of Satoshi Nakamoto, who would be unmasked as part of the project.”

The intellectual property, which he had already created and would now augment, would be worth as much as $1bn (£700m) with the Nakamoto name attached, so they would all end up very rich indeed.

In the end, we are left uncertain about Dr Wright’s true role in the creation of Bitcoin.

It seems very likely he was involved, perhaps as part of a team that included Dave Kleiman and Hal Finney, the recipient of the first transaction with the currency.

He may have exaggerated his contribution, he may have constructed a very elaborate fantasy – or this fragile personality may have lost his nerve as he realised that his life would never be the same again once he was Craig “Nakamoto” Wright.

If you are expecting O’Hagan to reveal the truth behind Bitcoin’s creation myth, you will be left disappointed.

But if you enjoy a ripping yarn – with some piercing insights into geek culture – then you will find the Satoshi Affair an engrossing way to spend a couple of hours.