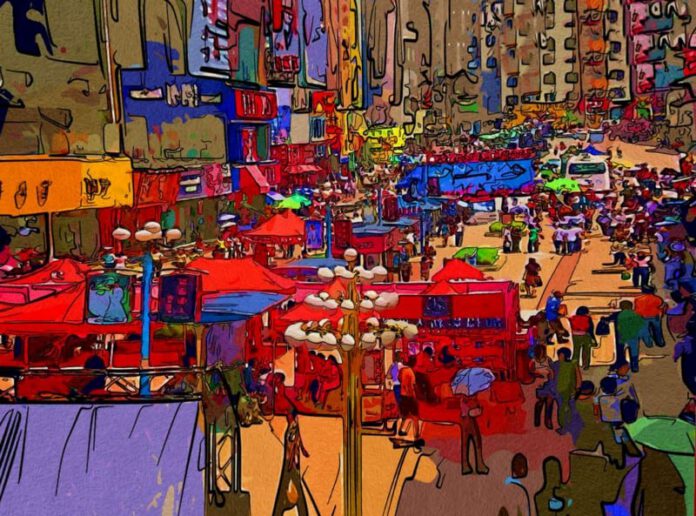 Markets and governments are often placed at opposite ends of a spectrum: more government intervention equals less competition, while deregulation and liberalisation always leads to more competition, innovation and growth. In reality, things are a lot more nuanced than that. Due to the existence of economies of scale in many industries, unfettered competition results in a high level of concentration and even, in some cases, in monopolies. In these cases, government intervention in the form of antitrust policies, are needed to retain competition.

Online industries like Facebook and Uber show huge economies of scale, in the specific form of platform and network effects. And due to their borderless nature, antitrust measures are very difficult to implement and, more important perhaps, would destroy real consumer value. Blockchain technology could offer a way out of this dilemma.

Capitalism — free enterprise — is a beautiful system. It was an enormous improvement over the medieval system in which enterprise was not free, but needed a license to operate — a license from a king, a guild or the church. In that system, competition was limited and the licensed craftsmen and chartered companies made excessive profits. This gave us, in the former Hansa cities, nice guild houses and lofty canal dwellings, but it did not bring a lot of other positive effects. A permit based system — artificial monopolies — is, by its very nature, conservative and not very innovative.

Progress requires competition. Whoever thinks he can do better, has to have the opportunity to do so. Inefficient producers are defeated by smarter challengers — that is progress in a capitalist system. Joseph Schumpeter called it creative destruction , we now call it disruption. Competition, or even the threat of competition, makes sure that companies stay efficient and innovative, and that brings progress.

Some believe that free competition is somehow a natural state; as long as government stays out of the economy as much as possible, competition, innovation and progress magically emerge. That is evidently not true. What happens when a government doesn’t regulate markets, can be witnessed in countries that have weak or corrupt governments, and in markets that officially do not exist and therefore cannot be regulated. In those circumstances, the most effective way to make money is not innovation, but elimination of the (potential) competition by all means available.

Government’s responsibilities for a decent functioning of markets are not limited to maintaining law and order. Even without corruption, violence of other forms of foul play, most markets have a tendency towards concentration. This is because economies of scale exist. Economies of scale make that bigger companies produce at lower costs than smaller companies, so that big companies keep getting bigger and smaller competitors disappear. In some industries, like oil, pharma, aircraft and accounting, economies of scale are so large that less than ten corporations dominate the global market. This is a concentration of money and power that can easily lead to abuse. That is why governments, especially in the US, used to actively break up monopolies, with Standard Oil and Bell Telephone as the most famous cases.

On the other hand: economies of scale are real, and forcing companies to break up is forcing them to produce at higher cost. This is a destruction of wealth, at least in the short term. Behold, in a nutshell, why economies of scale were one of the most challenging issues for regulators in the industrial age, in which size clearly mattered.

The Big Promise of first the world wide web and later social media was to end this. The triangle of mass production, mass media and mass consumption could be broken. Someone, I believe it was Hugh MacLeod, coined the phrase ‘global microbrand’: even a small company could build a worldwide client base at low cost, provided it made something special. Small would become the new Big.

Unfortunately, for now not much has materialised from that promise. Only a very few multinationals have actually been disrupted. Even newspaper and music publishers still exist (and make money). Small has not become the new normal. On the contrary: we have seen the rise of some extremely big and powerful companies. Facebook, Google and Apple are the most powerful companies ever, not only in terms of their war chests, but more importantly to the extend of what they know about you. AirBnB, Uber, eBay, Amazon and a few other so-called unicorns have monopolized entire industries. All because of economies of scale or, more precisely, because of a particular sub-set of economies of scale that are known as network- and platform effects.

The network effect is also known as Metcalfe’s Law. It states that the value of a network for its existing users increases with each new user — making the value of the network as a whole increase exponentially with every new user. Network effects lead to winner-takes-all situations: whoever manages to be the first to surpass a certain threshold of users, will be dominating the industry for a long time, even as better alternatives become available. WhatsApp is great example of this dynamic.

The platform effect appears everywhere where supply and demand are coupled. The buyer will go to the place where most sellers are, and vice versa. It’s a difficult place to conquer — the famous chicken-and-egg problem — but an easy place to defend. This is how, in The Netherlands, Marktplaats remains the biggest second hand market place of the country, without having to make much of an effort. (eBay acquired Marktplaats in 2004 instead of trying to outcompete it.)

Almost all so-called unicorns are found in industries where network and platform effects are huge. The ”winner takes all” logic goes a long way in explaining the typical start-up dynamics and the huge investments: whoever is first will be able to basically block all competition and therefore have all the possibilities to recoup the investments, and then some more.

So now we have the paradoxical situation that our economies have been massively democratised on one end, but that the power of a handful of private companies has become bigger than ever at the same time. Everyone can make money writing songs, renting out their attic, driving people from A to B and selling home-made beanie caps without the permission of a government or publisher, and without needing lots of capital. Just as long as you comply to the user agreement of the dominant platform in your industry, including handing over five to thirty percent of your earnings.

Economies of scale were a difficult enough phenomenon to cope with for regulators in the old economy, but they have proven to be even more challenging in the online economy. It is obviously not in the short term interest of users to break up Facebook (or Uber, or any other similar company) — even if we knew how to do that, or who should do it. But it has to be done, these monopolies need to be be broken down. Because eventually monopolies lead to waste, corruption and crony capitalism, while at the same time slowing down innovation and progress.

Traditionally, we know two ways to remedy these “efficient” or “natural” monopolies: nationalisation (or more broadly: collectivisation) and tendering. Because we are talking about global, worldwide platforms, nationalising them seems to be out of the question. Tendering, as we know it from public transportation and ether frequencies (competition for the market instead of competition in the market) might work for a few of the mentioned platforms. Uber and her competitors could compete for the exclusive right to offer ride-hailing services in, say, the city of Amsterdam for a number of years. Same for AirBnB and other platforms that offer services that can be geographically fenced off. But — not even considering that most platforms fall outside this category — there are significant differences between Uber or AirBnB and similar platforms, and ether frequencies for instance. Uber and their kind are online services, meaning that they collect significantly more data on the markets they operate in. If Uber were to be awarded the exclusive right to offer their services in Amsterdam for a couple of years, they would collect so much data that they would have a decisive advantage over their competitors in any next tender or auction.

It seems that, in the case of global, online platforms, we lack the tools to regulate monopolies and safeguard competition. Even adequately taxing them fails most of the time.

Blockchain has gained a reputation as “the technology behind Bitcoin”. For those not familiar with the concept, this video is a great way to get up to speed in six minutes. The Bitcoin Blockchain, as discussed in the video, is especially interesting as a mental model. The Bitcoin transactions are stored on the Blockchain: a publicly accessible system, that is owned by no-one and that cannot be closed down or censored by anyone. On top of this, services are offered, such as exchanges, but it is easy for users to switch from one service to a competing one, because all actions one takes are recorded in the public ledger, instead of the “closed vault” owned by the service provider. This means it is a lot easier for a customer to change providers for a certain service.

Now imagine that Facebook would work this way. Your data — your profile, your relations, your messages, your privacy settings — are all (safely encrypted) stored in a publicly accessible system and Facebook only offers you their user experience: the ease of use, the relevancy of the ads, the speed with which pages load, that sort of things. In this scenario, you could easily switch to a competitor, without losing any of your old data. Facebook would no longer be the platform; the Blockchain would be the platform. And there could be “normal” competition on the platform, instead of winner-takes-all competition for the platform. In other words: a meaningful development of Blockchain technology could provide a good (and possibly the only) way to get a grip on those monopolies that are a result from network- and platform effects.

If we will see such a development is a big if. The good news is that there are a multitude of initiatives to develop and add functional layers on top of the (bitcoin-)Blockchain stack. Some of it is open source and/or not-for profit, but there are also venture capitalists that understand what is at stake and have even found a business model in it. The not-so-good news is that the foundation, Bitcoin itself, is slow to evolve. Changes and improvements to the code are the result of a long winded and tedious process that at times looks like a democracy, at other times appears to be a consensus-driven effort and every now and then straight up resembles an episode of Game of Thrones. Decentralized systems are not always very efficient.

Simultaneously, banks and other big companies are working on their own “private Blockchains”. A private Blockchain essentially is a cartel: a closed group of companies sharing information with each other, but not with outsiders. A proven method to defend existing market positions and demoralise newcomers and innovators.

In the meantime, our policy makers are still contemplating whether or not the taxi industry needs to be protected from “challenger” Uber. They’d better focus on investing in an infrastructure that can save the free market from that sort of platform monopolists.

Blockchains Databases… Should We See Them More as Middleware?

Gideon Greenspan: How to Spot a Half-Baked Blockchain When Chains and Blocks Serve No...

ICO Picks and Snow Shovels, This Week (Plus 7 Red Flags)

Exchanges Are Holding Back the Cryptocurrency Industry