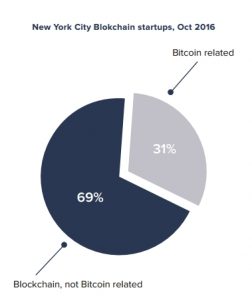 Blockchain technology startups in New York City. Blockchain, known as the underlying technology that powers Bitcoin is used by a growing number of companies for different purposes. The study found that so far in 2016 more than $80 million was invested in Blockchain startups operating in New York City; none of these investments were Bitcoin related.

“Seventy percent of the Blockchain startups operating today in New-York are not BitCoin related,” he said. “Startups developing middleware platforms to application development seem to be gaining the fastest momentum. By far, startups in this category have been able to get the most investment in 2016.”

Since the beginning of 2016, the increase in investments have been generated mainly by non-bitcoin startups in three key categories – middleware, clearing house and payments.

The study included the review of over 100 companies with only a few dozen making it to the final short list of relevant startups based on the criteria.