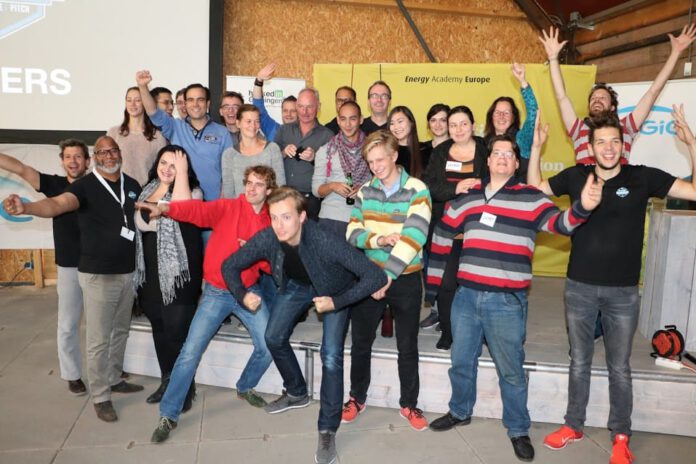 After a full weekend and 48 intense hours of collaboration, excitement and solution-finding, the best idea according to a jury of industry experts was a project called EcoCoin at Hackenergy 2016.

The hackathon was sponsored by ENGIE Nederland,  Energy Academy Europe, the City and Province of Groningen – and backed by Groningen’s IBM Client Innovation Center (CIC).

“It was a great event, bringing the energy transition where it belongs: with people who want to work on our future, and a great way to connect knowledge, innovation and business. We look forward to welcoming new energy business ventures and to hosting a following edition!” stated Maurits Alberda, Manager Entrepreneurship & Innovation at Energy Academy Europe.

Brendon Geils (USA), Simon Appel (Germany) and Hodge Hodgson (Germany) – the three hackers from the winning team, built a Blockchain-fueled peer-to-peer (P2P) energy trading system on the open source Hyperledger Blockchain managed by the Linux Foundation of which IBM is a significant partner.

Similar to other projects that have been worked on for over a year, such as the Transactive Grid being built by LO3 Energy and ConsenSys in the USA, EcoCoin was constructed in 25 hours as the team spent the first day brainstorming and formulating the idea.

“The first night we spent the entire night brainstorming then by 11am the next day we conceived the idea,” said Brendon Geils, one of the hackers. “At that point we had 25 hours left to hack – and we did it in the next 25 hours.”

“The use cases are various,” stated Hodge Hodgson, “One is that we can bring individual producers and consumers of energy, whether that be solar or be that from combined heat and power or whatever source together and the other one is that we can whitelabel the tool for intermediaries like the utilities in order to have their foot in the door and keep customer retention.”

It was unsure at press time if the team would take the 5000 euro cash prize or alternatively opt to enter the startup accelerator programme called Energy Venture Lab/Startup Fast Track, backed by  energy multinational ENGIE, Groningen University/VentureLab North, Hanze UAS and the Province of Groningen.

But they do plan to attend Ultrahack 2016 in Helsinki in November – an international hackathon league with winners from more than a dozen other hackathons in Europe competing for a share of over one million euro in investment funds.  This was arranged by Hacked in Groningen Hackathon League in partnership with Futuretournaments Oy in Finland and the Ecocoin team will receive a 1000 euro grant for travel, accommodation as well as tickets to attend the Slush festival after Ultrahack – one of the largest tech events in the Nordics.

Richard Kastelein, from Stichting Hackitarians who organised the event said that Ecocoin’s project was amazing and deserved to win as they really had a working prototype at the end of the event.

“There is a lot of fresh innovation being done in the area around peer to peer energy trading, Blockchain, AI and Iot,” stated Kastelein. “And these digital nomads really grabbed onto the concept, ran with it and nailed it.”

Hackers from Germany, Spain, USA, UK and the Netherlands attended the event, held in Groningen, an Hanseatic student city in the Northern Netherlands and there were nine presentations in total at the end of the event.

Best Design was won by Hack the Truck, Best Technology was won by Joris and Best Commercial Concept was won by UU-IoT with their James Project – and all received 400 euro in cash prizes for their work. 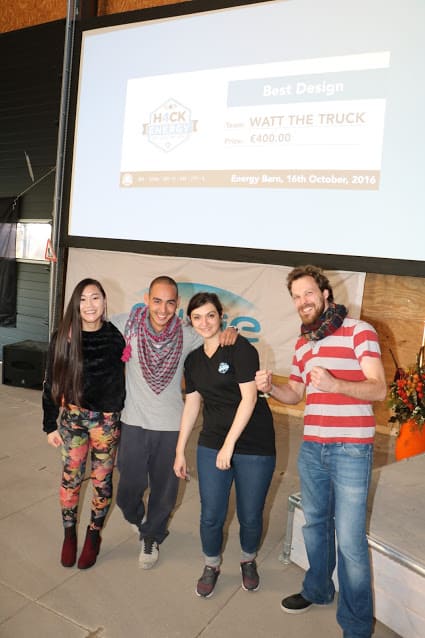 H4ckenergy 2016  brought together the challenges faced by the world in the transition of energy with the people who have the passion and ability to solve them. Participants gathered for 48 hours to engage in a energy-related problem solving pressure cooker and workshop.

The event was held at the Energy Barn on the Hanzehogeschool campus at the Energy Transition Centre (EnTranCe) and sponsored by ENGIE Nederland, Energy Academy Europe,  Gemeente Groningen and the Province of Groningen, H4ckenergy was fueled by IBM and organised by Stichting Hackitarians (foundation) and part of the Hacked in Groningen hackathon league.