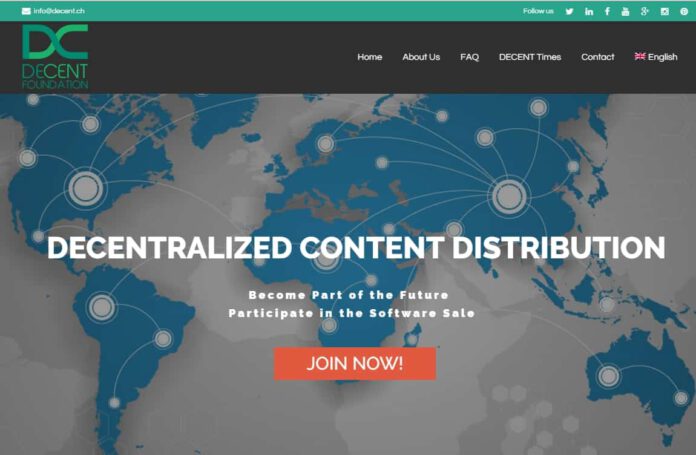 DECENT, a cutting edge peer-to-peer content distribution platform revolutionizing the way people share media, has embarked on large scale international expansion during their successful ICO. While raising more than $3.6 million USD since their crowd raise commenced in mid-September, the Swiss startup has opened up an office in China, brokered several business partnerships, and established a Blockchain development hub in Yerevan, Armenia. The DECENT ICO concludes on November 6, 2016.

“Pushing into China is a benchmark moment for our company. There is so much potential in the Asian market and the thirst for Blockchain-powered solutions, especially to problems like piracy, is growing by the day. We are also excited about our developments in the Caucasus. Armenia has presented itself as a fertile climate for software developers who have their hearts set on innovating in Blockchain technology. To that end, we are establishing the first-ever Blockchain hub in Yerevan and hope to gain backing by the Armenian national government, which will dramatically accelerate  Blockchain expansion in the region. Many throughout the world are unaware that the area is a hotbed for talented software developers and technology enthusiasts, who will be key to fueling education and adoption in this corner of the globe and beyond.”

In the last two weeks, DECENT opened a new office in Shanghai alongside 40 high-level fintech companies. Over $1 billion has been invested in the overseas Blockchain market to date, a sector catching the eyes of many venture capitalists. DECENT is currently in negotiation with multiple Chinese business partners and has announced partnerships with two rapidly-growing Chinese firms: Beijing Fastweb, a leading content delivery network with over 150 locations and existing partnerships with every major telecom carriers in China, and Aikxian, one of the world’s fastest-growing video live-streaming companies. Maintaining a base in China will not only boost DECENT’s user base, but expedite Blockchain adoption in the most populated continent in the world.

In Yerevan, Armenia, DECENT’s founders have established Blockchain R&D Hub, the first Blockchain research and development hub in the Caucasus region. Their mission is to create products and solutions that enable the convenient, direct, and secure exchange of digital content globally, leveraging Armenia’s unique pool of talent in technology as a catalyst for development.

As part of their international expansion, DECENT has also partnered with the Hackereum Project in an effort to further heighten platform security. The alliance will see white-hat hackers carrying out attacks and pinpointing vulnerabilities to eradicate any software malfunctions and ensure the protocol is watertight.

DECENT has 10 days remaining of its ICO. After its conclusion, DCT tokens will be issued investors no later than Q2 2017.