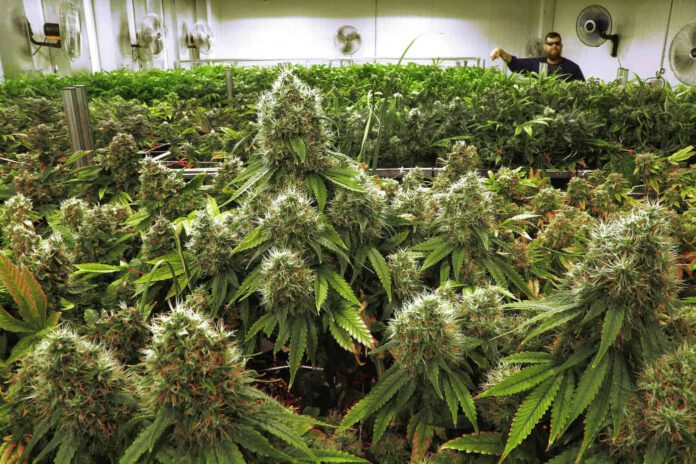 There are numerous Blockchain startups and cryptocurrencies who stand to benefit from the normalization of marijuana and in last week’s “green letter day” for cannabis legislation in the United States and some of these Blockchain companies are in a secure position to prosper from relaxed rules in America.

Rob Marvin from PCmag has written a brilliant article on the emerging startups in the space.

Maine, Massachusetts, Nevada, and the big domino the whole legal weed industry was watching intently—California—joined Alaska, Colorado, Oregon, and Washington in legalizing recreational marijuana on election night. Arkansas, Florida, Montana, and North Dakota passed medical marijuana legislation, bringing the number of legal medical marijuana states to 28 plus the District of Columbia  That’s more than half the country in which ganjapreneurs can soon start new businesses that will touch every aspect of the weed economy.

Technology is helping to fill in a lot of those gaps for cannabis businesses. In particular, a host of startups are beginning to tackle cannabis industry issues using Blockchain. Blockchain startups such as Tokken aim to work in tandem with seed-to-sale platforms for supply chain matters.

“Tokken was born as a way for banks to deal with high-risk accounts. One of the federal government requirements that precludes banks from operating in the cannabis space is the ability to record and ensure complete data integrity,” said Zarrad. “The Blockchain is not our entire banking infrastructure—we don’t use it for value transfer—but we use its indelible ledger as a redundancy mechanism. The Blockchain eliminates that risk because we can prove to regulators and law enforcement that every timestamped transaction recorded through our system hasn’t been tampered with.”

“There are a lot of use cases for Blockchain in the cannabis industry, but first and foremost is data transparency via a trustless system,” said Eugene Lopin, CEO of CHEX to Fox News. “CHEX is wholesale cannabis marketplace software that includes a portal for commodities, and on the roadmap is a marketplace for finished products as well. Once we have wholesale market transactions in compliance with regional regulation, we want that data to be auditable.”

“Blockchain is really interesting for the cannabis industry,” said Lopin. “Let’s say a transaction was made on our exchange that triggers a process where a wholesale distributor automatically packages a product and loads it onto a truck. When the dispensary receives that delivery, it has to be authenticated. You can do that using a mobile app or something like biometrics, but let’s say the transaction uses a [blockchain-based] smart contract that says the container can’t be opened until it’s authenticated. Beyond just cannabis, that kind of asset verification could potentially be disruptive down the road for something like international commodity trading.”

According to the article in PCMag, Boston-based Medicinal Genomics uses a service called StrainSEEK to map and sequence the DNA of different cannabis strains, then register that information and store it on the Bitcoin Blockchain.

PotCoin wants to help facilitate transactions in the cannabis industr and according to their website they claim to remove the need for cash transactions.

“PotCoin is the first digital currency created to facilitate transactions within the legalized cannabis industry,” the project states. “PotCoin is a community based effort. A truly decentralized autonomous organization the PotCoin community members determine their level of involvement, commitment and development.”