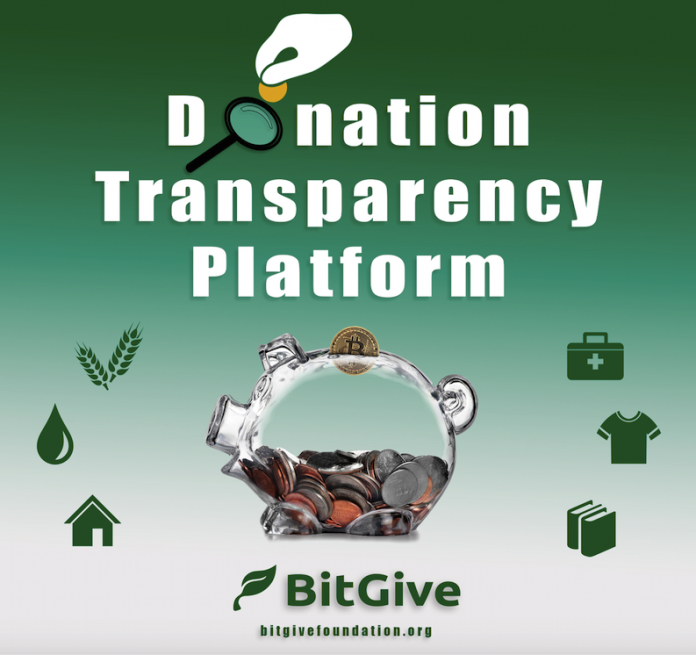 Bitgive has announced the launch of Givetrack, a Blockchain powered platform that traces nonprofit transactions. The application aims to allow greater transparency and ensures donor funds reach their destination.

GiveTrack uses Blockchain technology to allow donors and the public to trace nonprofit transactions on a public platform in real time to see how funds are spent, ensure they reach their final destination, and track the results generated from contributions.

GiveTrack will help reward good actors, educate donors, and identify & avoid fraudulent activities that occur along traditional paths. GiveTrack can be used domestically, and will also significantly increase access to funds in the developing world while reducing the friction, transaction time, and exorbitant fees of traditional cross-border transactions.

Given the many incidents involving charities misusing donated funds — from the Trump Foundation admitting to self-dealing to San Francisco socialite Joy Bianchi’s charity Helpers Community Inc. doing almost no charitable work while amassing millions in assets to the former New York street corner charity United Homeless Organization being revealed as a fraud back in 2009 — it’s no surprise that many Americans are distrustful of philanthropic enterprises.

A 2015 study by The Chronicle of Philanthropy found that 35% of Americans had little to no faith in charities.

The Blockchain technology that underpins the cryptocurrency bitcoin has often been described as a potential solution to industries that suffer from fraud or a lack of transparency and trust.

We may not be able to stop natural disasters from happening, curb severe weather events, or solve all the problems of corruption around the globe, but we can implement a new system using the most innovative technology available today.

Bitcoin and Blockchain technology is an amazing innovation that provides the means to not only transfer funds directly, securely, and at significantly lower cost; but to also broadcast every transaction on a public ledger, allowing everyone to see exactly where the funds go and the impact they have. GiveTrack will build upon the existing core technology a customized platform for nonprofits that is data centered, user friendly, and provides a comprehensive user interface.

Our initial MVP (minimum viable product) is currently under development. We are working closely with several partners, including our lead charity partner, The Water Project, to support projects in western Kenya and additional charity partners around the world. Future phases of GiveTrack will build out a broadly-applicable platform, data analysis layers, feedback loops, reporting mechanisms, and more.