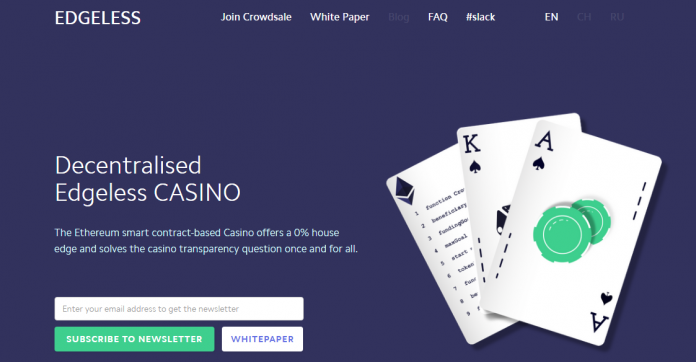 Online gambling industry is facing a big problem these days – players are losing their trust in online casinos because of the fear being scammed. When a player enters the digital gambling world he can not be sure that his odds are not rigged and that the outcome of the game is actually random. Everyone needs to know whether they are just having a bad day and bad luck or casino saw a big bet and decided to give a low card on purpose.

Not so long time ago, three guys were faced with this problem and they decided to do something about it – gather a team and create the first decentralised Ethereum smart contract-based casino which offers a 0% house edge and solves the online gambling transparency question once and for all – Edgeless. Thanks to Ethereum smart contracts everything what is happening inside the casino will be easy accessed by anyone, so that all the paranoid people can be 100% sure that no one is trying to scam them.

The most important thing when it comes to fairness in any kind of online game is the randomness of numbers/outcomes. In order words – when you roll the dice – you don’t know whether the outcome is actually random (just like when you roll the dice in real life) or is it programmed to make you lose your bet. The list of casinos that got caught cheating in many ways, including rigging the outcome, is huge. This mechanism is pretty simple and that is why it is easily rigged. Online casino creates a random number using combination of casino’s number and client’s number. It blends 2 numbers and provides random outcome.

Idea behind that is: casino can rigg own number, but they would not be able to rigg client’s number and outcome will random, therefore casino would not able to cheat. But there is still three ways to do it:

If the online casino which is based on smart contracts would try to rig the odds, it would be immediately spotted.

Moreover, 0% house edge can sound a bit crazy, but in reality even with 0% house edge, a player because of its imperfect play, gives around 0,83% to the casino – this was calculated by a former Nevada Gaming Control agent and professional card counter Bill Zender.

An average player does not play ‘the perfect game’ therefore, in the long run the casino  takes a profit from his mistakes. An analogy can be taken from poker. A new player is playing against a Pro. Both have equal probability conditions – 50% vs. 50%. However, the Pro player makes better choices and the new player makes bad decisions, and in the long run, the Pro wins. 0% edge card games will be a primary marketing tool to attract players, but additionally, the casino will make profit from sports betting. In this area, the casino will earn 4% from all money wagered.

First there was online fiat money gambling houses, then we got Bitcoin casinos and now – the new era of casinos are about to begin. Decentralized, transparent and 0% edge casino is about to be launched.

Edgeless decided to raise an initial capital through Initial Coin Offering (ICO). Developers distribute a percentage of the initial coin supply among the early supporters and backers. Each one who will invest in Edgeless will be able to get his cut from 40% of profit which will be sent each month through smart contracts. According to Edgeless team, in 2018, the return of investment will be – 14.54%.

The money that is raised is usually spent on the future development of Edgeless casino and its games.

Their crowdfunding campaign will start on 16th of February 2017, 3:00 pm GMT and their goal is to raise 440 000 ETH by selling Edgeless tokens, the rate is 1 ETH = 1000 EDG. Then during next 6-8 months developed their first online game, 0% edge BlackJack, and set it live. In the future developments there is a plan to add more games to the package: 0% edge Video Poker, 0% edge Micro Limits Dice and Sports Betting.

The Necessity of Delegated Proof of Stake