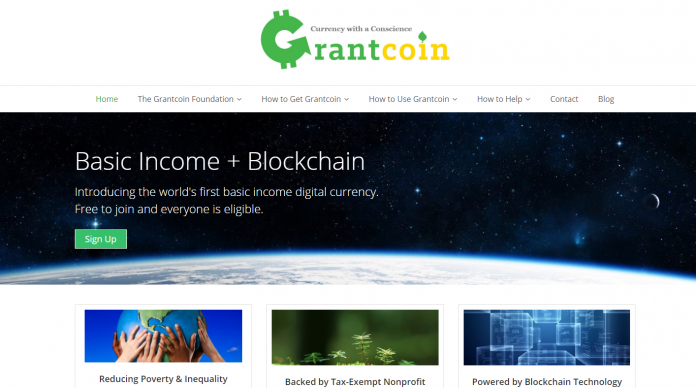 The Grantcoin Foundation has delayed the quarterly distribution of Grantcoin Basic Income which was scheduled to occur on December 30, 2016 for a number of technical reasons.

They are rescheduling the next distribution of Grantcoin to late January. Please sign up by January 21 to be included. That date is a final cutoff, after which there will be no further extensions to be included in this quarter’s Grantcoin Basic Income distribution.

In other news, the Grantcoin Foundation is pleased to announce that they have expanded their Board of Directors to five people. Two new Board Members join the organization’s founding Board of Eric Stetson, Brandon Venetta, and Jon Frechin:

The Grantcoin founders are excited to be working with Amanda and Mark to lead Grantcoin to the next level of success in 2017. View their photos and learn more about these highly talented new directors of the Grantcoin Foundation on the team page.

Also, the Grantcoin Foundation recently published an 18-page Case for Support (PDF). This document is a must-read for anyone wanting to gain a thorough understanding of the Grantcoin project, its history, impact, future plans and needs.

Only 62 people own more than half the wealth in the world today, while almost half the human population – over three billion people – are living on less than $2.50 a day. At least 80% of the world’s people live on less than $10 per day.

This extreme wealth inequality is a moral outrage. On a practical level, it is an utter failure of civilization to include most of the world’s people as full-fledged participants in the global consumer economy. As such, it is a poor allocation of resources that could be more profitably distributed for the benefit of rich and poor alike.

The Grantcoin Foundation offers a solution to the growing problem of wealth inequality and its consequences. They  have developed an alternative currency called Grantcoin which is issued into circulation as a universal human right, with equal access for all whenever new units of the currency are created and distributed.

The inflation of the Grantcoin money supply functions as a built-in mechanism to counterbalance factors in the economy and society that tend to increase economic inequality, thus applying a brake on runaway inequality, while mainstream monetary systems have their foot on the accelerator.

Unlike the currencies generally in use in the world today, which are issued primarily through the for-profit banking system as discretionary loans, Grantcoin uses a non-discretionary system of monetary issuance, to prevent corruption and favoritism for access to the money supply.

Grantcoin is distributed as a Universal Basic Income subsidy that every person in the world is eligible to receive, for free, just because they are human and have the right to restheirces to help them survive – according to the same principle that grants us the universal, inalienable right to freely breathe the air.

Money is an intangible representation of value that is necessary to live in a civilized world; and although the amount of inherent value of a human being, when measured in economic terms, is less than the amount of economic value they might acquire through productive work or investment of capital, a person’s inherent value is not nothing. The monetary system we use should reflect this principle.

The success of Grantcoin in helping give rise to a less severely unequal distribution of wealth among people and nations is not dependent on the success of any political movement, legislation, or international treaty or institution.

The people of the world themselves, by supporting and using Grantcoin as their preferred currency, may bring about the desired effect – and a positive effect will not be prevented if less than a majority of people decide to support it, as would be the case using political methods in democratic countries.

Even if only a small minority of the world’s population decides to use Grantcoin, it will still be able to exert a positive influence on the global economy in the direction of equality.

The Grantcoin currency network uses decentralized, open-stheirce, peer-to-peer technology, is fully legal in many countries, and cannot be easily shut down or blocked by any government that may wish to prevent its citizens from using it.

Grantcoin empowers the people of the world, both in its technological and socioeconomic structure and effects. This new alternative currency can be an important piece in the puzzle for solving the problem of wealth inequality in the 21st century.

Facebook
Twitter
Pinterest
WhatsApp
Previous articleUNICEF, UK Home Office and BTCC to speak at London Blockchain Week 2017
Next articleBenedikt Herudek – Why Ethereum Style Blockchains do not ‘really’ de-centralize – the ‘real’ problem of Decentralisation
Richard Kasteleinhttps://www.the-blockchain.com
In his 20s, he sailed around the world on small yachts and wrote a series of travel articles called, 'The Hitchhiker's Guide to the Seas' travelling by hitching rides on yachts (1989) in major travel and yachting publications. He currently lives in Groningen, the Netherlands where he has set down his anchor to raise a family and write. Founder and publisher of industry publication Blockchain News (EST 2015) and director of education company Blockchain Partners (Oracle Partner) – Vancouver native Richard Kastelein is an award-winning publisher, innovation executive and entrepreneur. He has written over 2500 articles on Blockchain technology and startups at Blockchain News and has also published in Harvard Business Review, Venturebeat, Wired, The Guardian and a number of other publications. Kastelein has an Honorary Ph.D. and is Chair Professor of Blockchain at China's first blockchain University in Nanchang at the Jiangxi Ahead Institute software and Technology. He has over a half a decade experience judging and rewarding some 1000+ innovation projects as an EU expert for the European Commission's SME Instrument programme as a startup assessor and as a startup judge for the UK government's Innovate UK division. Kastelein has spoken (keynotes & panels) on Blockchain technology at over 50 events in 30+ cities.