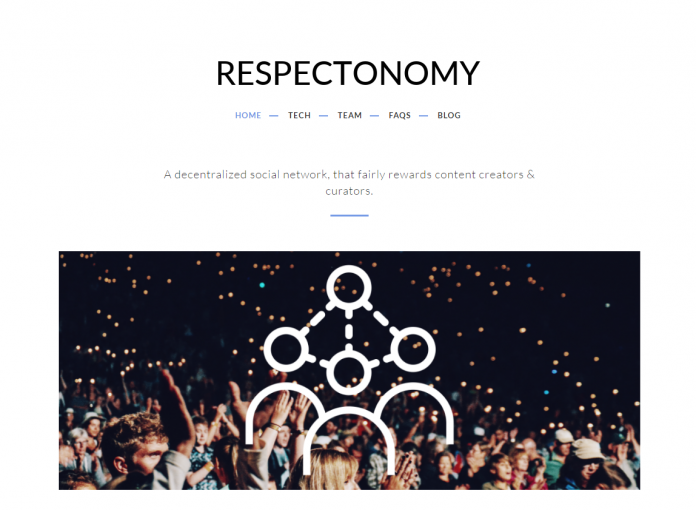 Decentralized, self-moderated social network and Blockchain startup Respectonomy, says it’s new platform will not only allow users to share content without any fear of censorship but it will be reward them for it.

“An opinion held about someone acts as proxy for our brain to judge the quality of the content they will produce,” said Thunder Bolt, one of Respectonomy’s two developers. “Reputation is thus what social networks aim to simulate.”

The developers of this soon-to-be-released network believe it will be the first to remove all forms of censorship.

The open-source, browser-based network assigns value to data and offers a mechanism for fairly compensating data bandwidth availability. It uses a proof of work (PoW) Blockchain and the Bittorrent protocol to determine the value of the RES tokens that run the system.

The independent token, unlike colored coins, allows for a closed network with a dynamic membership of parties that determine its true value.

Since social networks on the Internet are generally free to use, they find they must find ways to prevent trollers and spammers from posting content. Some sites use some type of voting. Some use censorship.

Others use a reputation-based system since a person’s reputation offers an indication of the quality of their future content, but this method is not always accurate since content can be inconsistent.

“Voting-based social networks allow pseudonymity and measure this reputation earned based on votes, but the karma earned cannot be carried forward or used,” Thunder Bolt added. “A few social networks thus try to build an economy around the content and reputation information generated by its own users.”

Contrary to these are systems that emphasize reputation by attaching it to the real-world identity of the user, Thunder Bolt noted. The partial system of measuring reputation, such as “likes” collected, is not usable either. In addition, these systems are proprietary in nature, locking in the data that users produce and selling off users’ attention.

Some sites that rely on reputation-based systems attempt to seize the limited human attention span through advertisements, trolling and spam.

“Blockchain entrepreneurs have understood these problems and have made various attempts at trying to solve these problems by decentralizing various aspects of publishing,” Thunder Bolt said.

Currency Instead Of Votes?

When the votes are replaced by a form of currency, they become more valuable. Because users want to earn more than they spend, the vote-based method can starve the system. To address this situation, some networks provide free bitcoin as a sign-up incentive. This, however, can be exploited by Sybil attacks whereby users create multiple accounts, or by using bots.

“A few systems have tried to award bitcoin instead of votes,” Thunder Bolt said. “But users of such systems want to earn more than they want to spend, and economic activity dies down over time.”

Others have tried to decentralize the data storage aspect of publishing by trying to store data on the Blockchain or using distributed databases, while some use both.

“In such systems, users bear the burden of storing data for using the system since fee analysis shows that Blockchains are not free databases,” Thunder Bolt said.

A few systems use Bittorrent protocols to distribute content to be hosted by the users and lets others charge for it. Although this is better than storing data on the Blockchain, it still runs into storage issues over time. But an even bigger problem in such systems is determining the price that must be paid for content.

The bitcoin protocol has shown that the price of a rare token can be determined automatically by the free market. It provides a mechanism to create such tokens.

Most of the systems noted above have their own Blockchains with unique coins that help to determine the true value of these systems as perceived by the free market. The problem becomes the distribution of the coins created.

“All proof-of-stake based Blockchains face this problem, while even some proof-of-work systems use tactics to mine unfairly,” said Firebird, the other Respectonomy developer. “Some have even gone as far as to publicly admit accumulation of coins to be distributed to content creators. effectively reducing these systems to a Ponzi scheme for investors.”

“A transparent proof-of-work Blockchain based content publishing platform that uses distributed data storage can work out,” Firebird continued. “But the distribution of coins still affects these systems because a fair mechanism for content ranking and reputation measurement is required, and distributed storage might still run into censorship problems with controversial data.”

“Some systems try to build liquid democracy based systems, but a system with delegates runs into problems with minority representation,” Firebird said. “Others try to distribute reputation based on various aspects of the social graph, but the edges on someone’s social graph are binary – someone is your friend or not – which cannot represent the weight. Most such systems assume a centralized method for forming social graphs while having other problems with identity and coin distribution.”

Respectonomy modifies the Bittorrent protocol only to host content with users that endorse it. When users “share” content, it becomes a seed in a subnetwork of only those Respectonomy users that have shared that content. Thus, only the supporters of the content bear the burden of hosting it.

While downloading the content, a user can see descriptions to other files that the uploaders might be hosting, and thus this subnetwork also acts as a recommendation engine by measuring the frequency and nearness of other data, and because content downloading is paid for, the seeds act as curators.

The “shared” content then becomes a locally-hosted curated list which the users earn from by hosting. To fairly determine the price for such an exchange, Respectonomy deploys its own Blockchain where the flow of the token dynamically determines the value of content exchange. This mechanism of tracking data in an isolated network helps fight censorship by replicating the data globally and the data being available until anyone is willing to host it.

The Respectonomy server in itself is just a mining pool that others can freely clone and run. There is no signup concept. The code is fully browser based and connects to other browsers without a central server, and performs all actions based on users’ addresses tracked on a Blockchain.

All activity is observed by monitoring transactions, which makes it costly to spam and troll due to network fees. It offloads the problem of controversial content and to the discovery problem. Hence, controversial content remains hosted on its isolated subnetwork, and someone has to discover it and download it by paying for it. This is also necessary since what is controversial for the majority might be necessary for a minority.

The site mines just enough “respect” so that its expenditure introduces a built-in latency that does not impact humans, but charges the bots to “tap the firehose.”

Respectonomy provides a layer for anyone to build bots on that can crawl users’ data by paying them for it, and that bots can earn by providing services. Advertisers effectively become special types of bots that instead pay users to modify their hosted data. This carries an added benefit that ads always appear as recommendations rather than polluting the content stream.

“If we aim to solve it using some algorithm, even a bit of information changed in a file changes its records, but it could either mean piracy or creation of new content – for example, changing a single character in a code could mean new code,” Firebird said. “Also, what some people might consider curation, such as a collection of songs, could mean piracy for others. Labeling something as ‘pirated’ is thus a subjective opinion. Thus, an algorithm cannot determine whether content is pirated, but Respectonomy provides tools if a community effort wants to recommend original content to others downloading the pirated copy.”

“The original content creator can assign special benefits to the community for this effort, and since everything happens through transactions, it is an immutable record of people who bought your song, for example,” he said. “The transactions sending money to the address associated with that content’s fingerprint then can have special use cases such as access to a concert. Money sent to pirated copies will not have this benefit, whereas the downloader would also have spent an equivalent amount for it. This mechanism drives the price based on rarity of content.”

The RES token offers a token that users can use to vote for the content they deem superior in quality. This method ensures the content is peer reviewed rather than being based on a user’s reputation. The content’s value is based strictly on the token’s value, which is distributed fairly by a PoW Blockchain. It prevents branding any user as a superior content creator while discouraging ads, trolls and spam.

ICO In The Works

Respectonomy is planning an ICO at the end of the month. A total of 4 million tokens will be offered to raise a maximum 2,000 bitcoins. The network will have a total supply of 5 million bitcoins. One million bitcoins will be for developers, marketers, seed investors and a reserve supply for further development. The details are available in a white paper.
The funds will mostly go to development and marketing.

RES tokens will only be used on the Respectonomy platform. The tokens will be available on cryptocurrency exchanges, which the website will list.

Users will be able to buy RES tokens by participating in the crowdsale using bitcoin or by using RES tokens from exchanges. RES can be exchanged for bitcoins only.