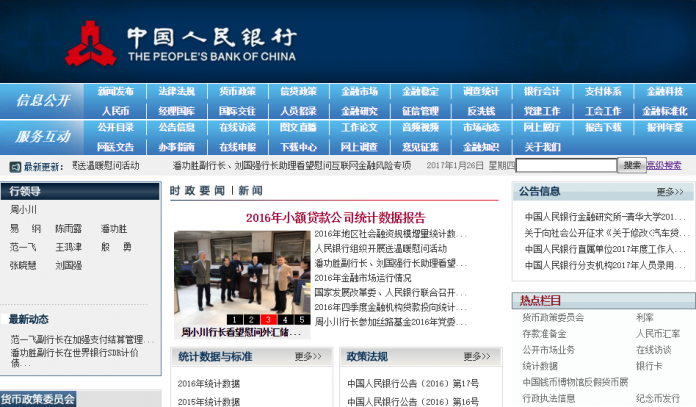 The People’s Bank of China (PBOC) completed a successful trial run of a digital bank acceptance exchange, moving closer to becoming the first central bank in the world to research and test its own digital currency, according a report in Chinese online publication Caixin written by By Zhang Yuzhe and Han Wei.

Sources from the PBOC told Yuzhe and Wei, the central bank on Dec. 15 completed the trial in transactions and settlements of bank acceptance bills using a digital currency it developed, supported by Blockchain technology.

The central bank’s digital acceptance exchange and currency system were put in place and connected for the test run with several commercial banks, including the Industrial and Commercial Bank of China, Bank of China and the private WeBank, the sources said.

In response to the creation of the Internet currency Bitcoin, Chinese monetary authorities have stepped up efforts to develop a government-backed sovereign digital currency. Similar efforts to explore future forms of money are underway by the U.S. Federal Reserve, the Bank of England and the Bank of Canada.

Chinese regulators have tightened scrutiny of Bitcoin, which lacks any official backing, and have banned financial institutions from using it.

In addition, a digital currency research institute will be officially set up after the week-long Chinese New Year holiday that starts Friday, sources said. Recruitment to fill several positions in the institute was launched in November, seeking experts in developing big-data systems, cryptography, and Blockchain technology.

The report continues to not that when the system is ready, the central bank’s pilot digital bank acceptance exchange platform will be connected with the existing Shanghai Commercial Paper Exchange to form a national platform for bank bill transactions, said a person close to the central bank. The central bank’s efforts to develop the digital currency started in 2014 when it set up a special research team to study the issue.

The efforts came into the spotlight in January 2016 when the central bank released a statement saying its experts were discussing along with Citibank and Deloitte a general framework for an electronic currency. It was the first central bank to voice support for the concept of digital cash. The bank suggested the digital currency would not only reduce circulation costs but also increase transparency and curb money laundering and tax evasion.
The PBOC says that China's digital money will be legal tender backed by the central government, unlike Bitcoin, the encrypted electronic currency that can be bought, sold and transferred without a bank. Ultimately, both digital and paper currency will be in circulation, according to the PBOC.

In an interview with Caixin in February 2016, central bank governor Zhou Xiaochuan highlighted his interest in the development of digital currency and the Blockchain technology. In July last year, the central bank kicked off the research on a demo platform for a bank acceptance exchange based on the technology.