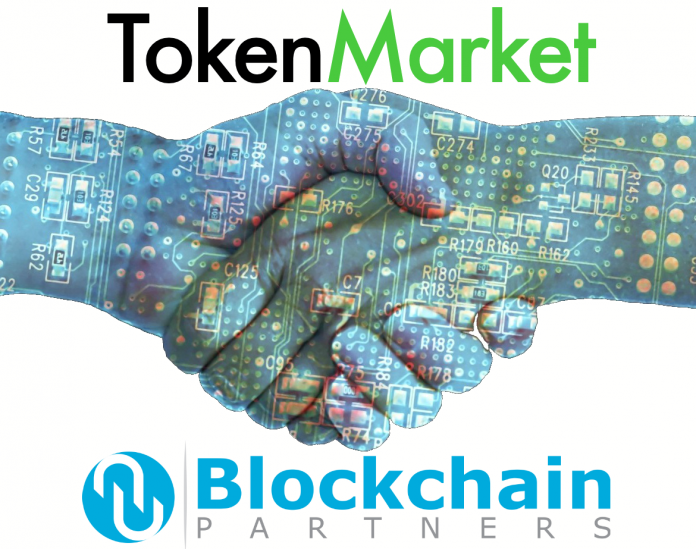 An ICO is a new type of crowdfunding instrument where startup companies issue Blockchain-based digital tokens that can be used on their service. Over the past two years, one quarter of the billion dollars ($250m)  invested in Blockchain startups came from ICOs.  And according to Venturebeat, Blockchain startups raising funds via ICOs make up 20% of the world’s largest crowdfunding projects in total.

The most successful ICO’s raised millions from investors, but these token-based fundraisings can be challenging as they often include new business models, complicated smart-contracts and unclear legal aspects.

“Together with Blockchain Partners, we have an extensive network and expertise in the Blockchain space,” stated TokenMarket CEO Ransu Salovaara. “We can now offer startups everything they need for a successful ICO, including strategic advisory, smart contract development, crowdsale platform, marketing and PR execution and multi-signature escrows.”

BCP, founded by Blockchain News publisher Richard Kastelein, is a group of advisors and Blockchain experts in both US and European markets. The team has worked on ten ICO’s in the past raising over $12m and has developed a solid marketing programme to take ICO’s from concept to close.

“We are really excited to team up with TokenMarket,” stated Jake Vartanian, who heads the ICO strategy for BCP and is an industry thought leader in tokenisation structures. “The industry has long needed a crowdsale platform like TokenMarket to better manage, present, organize, and market ICOs – rather than them solely taking place in web forums such as BitcoinTalk, which are not really built for crowdfunding.“

“By using TokenMarket as-a-service ICO platform, startups can focus on building their decentralized business that will make or break the company. We help these entrepreneurs by providing a secure and scalable crowdfund widget that can be whitelabel integrated on any website. The TokenMarket platform is able to take in millions in minutes, making sure all funding potential is reached and it comes through smoothly. Together with Blockchain Partners, TokenMarket can fully support startup teams through their crowdsale process, token issuance and secondary markets trading.”

“I think the Tokenmarket solution has been a long time in coming and what I find makes it most interesting is not only solving the problem the crypto-community has in managing their ICOs… but because they are also working with a KYC/AML compliant solution in addition to the ‘traditional’ ICOs – VCs, Angel Investors and others who are interested,  but not investing in the ICO arena now,  have an option they can feel comfortable with.”

“And also,  the traditional Bitcoin Whales or other cryptoinvestors now have a more organised solution that is user friendly, well designed, easy to use and is a platform that has a team to ensure some due diligence is performed on projects and outright scams or poorly ideated and executed ICOs are off the table,“ added Kastelein.

While ICO’s are currently based on “app coins”, many parties believe that the next step is tokenised equity crowdfunding that will make startup investing more transparent and liquid when shares are offered as equity-backed tokens that can be afterwards traded on digital asset exchanges.

“We are talking with regulators, lawyers and other stakeholders to build compliant Blockchain-based solutions for crowdfunding,” added Ransu Salovaara. “The goal is to offer structuring solutions from ICO to IPO.”

Tokenmarket (www.tokenmarket.net) was founded 2016 by Mikko Ohtamaa and Ransu Salovaara, who were also part of the team behind Europe’s first Bitcoin-backed Exchange Traded Instrument that got listed on Gibraltar Stock Exchange and co-listed on Deutsche Börse.

BCP (www.blockchain-partners.com)  was formed in 2016 as an offshoot of Blockchain News (www.the-blockchain.com) by Publisher Richard Kastelein, Token and ICO Expert Jake Vartanian and ex-NSA cryptographer, university professor, and physicist Christian Seberino Ph.D. in order to fulfil market demand for Blockchain education, consulting and ICO marketing. BCP has been working on a number of projects including consulting on a digital currency in Rwanda with a leading African bank, advising on Blockchain education for Oracle, and marketing a number of new ICOs for various startups.