Home News Blockchain Could Be a New Operating System for the Planet Says Jeremy...

Blockchain Could Be a New Operating System for the Planet Says Jeremy Wilson, Vice Chairman of Barclays Corporate Banking 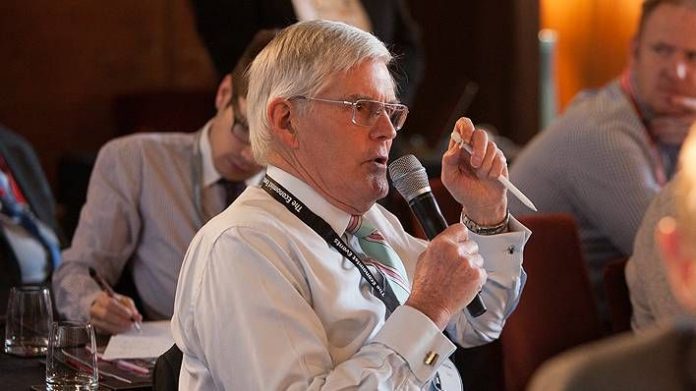 Blockchain will go far beyond finance to affect the lives of “almost everyone,” according to Jeremy Wilson, Vice Chairman of Barclays Corporate Banking.

“It will change not just finance, but the lives of almost everyone, directly or indirectly,” he told The Economist’s Finance Disrupted conference. “At the risk of overstating this, it looks as if it has the makings of a new operating system for the planet.”

Wilson was taking part in a panel discussion alongside fintech entrepreneurs Adam Ludwin and Eric Benz, and Blockchain guru Helen Disney. He offered insights from his experience in Barclays and through his chairmanship of the Whitechapel Think Tank, a vehicle for government, regulators and the private sector to tackle issues arising in the emerging Blockchain eco-system.

Asked whether Blockchain is a threat to banks, Wilson noted:

“I don’t think I’ve ever heard it mentioned in Barclays or in the Whitechapel Think Tank that Blockchain is anything other than a significant opportunity for the banks. And not just for the incumbents, but for everyone.”

Describing that opportunities of the technology, Wilson said:

“We’d better get our heads around where Blockchain is going to deliver most. It seems to me we’ve gone past the hype stage and we’re now seeing some quite serious business applications beginning to come forward.

“I think the simple principle is this: don’t try to use it in a place where things are on the whole working well. Apply this technology where things are presenting big challenges and need resolution. Go to the places that are ineffective, inefficient and expensive.”

Looking at areas in banking where Blockchain is already making an impact, Wilson identified trade finance and capital markets – citing a recent groundbreaking example : “Barclays have just done a pilot for trade finance, which usually involves a very long, complicated supply chain. It’s a sophisticated process developed over hundreds of years. The most inefficient thing in it is a document called the bill of lading, which can take weeks to get to the other side of the planet. And if you use Blockchain, you can transform that.

“In the capital markets arena, it is becoming increasingly clear that Blockchain is driving down significantly the inefficiencies and costs in the transaction process surrounding the buying and selling of securities.”

Wilson cautioned, however, that it will take industry-wide adoption of Blockchain before its full capabilities can be unlocked:

“It depends on how broad the constituency is that you have to address when you’re bringing a new capability. If it’s a very large universe, it will take time. Although things are moving much faster than anyone anticipated, I think it’s going to be another five to ten years until we really see this beginning to be embedded.”

The overall theme of the conference was ‘Collaborate or Die?’ and this was particularly pertinent in the Blockchain discussion, as Wilson described the importance of banks working together to create industry standards to allow the best outcomes for new technologies:

“When you get something as profoundly new as this, you will get different consortia, different gatherings and different forms of collaboration, and of course you’ll get intense competition. If you go back and look at Betamax and VHS, those were standards that conflicted with each other, and we may well find that we’re heading a bit in that direction. But I think there is a genuine attempt in the banking industry to make sure that doesn’t happen. So you get major collaborations to avoid the situation where we have a conflict.”

Barclays is backing a number of Blockchain innovations, both in-house and through incubators. Asked about the chances of “backing a winner”, Wilson said:

“The whole community of investment banks, capital funds and angels backs horses when the reality is most will not reach the finish line. But that’s the nature of innovation on this scale. It’s entirely right that it should be fostered and developed, and it’s entirely right that banks should seek to do all they can to bring this together, competing vigorously where they need to and collaborating when they can.”

Wilson is Vice Chairman for Barclays Corporate Banking, responsible for engagement at board or executive committee level with Barclays’ major corporate and institutional customers; for Barclays’ representation on industry initiatives; and as a representative of the financial services sector on global and regional industry bodies.

He is also co-chairman of the Whitechapel Think Tank and a member of the Global Futures Council on Blockchain for the World Economic Forum. He is chair of the UK Government Engagement and Advisory Group; chair of the Banking Industry Environment Initiative Working Group; and a trustee of various charitable trusts covering the banking industry and education.

Facebook
Twitter
Pinterest
WhatsApp
Previous articleJAAK and the Guardian Initiative Announce MΞTA: A Blockchain Pilot for The Media & Entertainment Industry
Next articleNew Blockchain Smart Contract Token Developed By GameCredits
Richard Kasteleinhttps://www.the-blockchain.com
In his 20s, he sailed around the world on small yachts and wrote a series of travel articles called, 'The Hitchhiker's Guide to the Seas' travelling by hitching rides on yachts (1989) in major travel and yachting publications. He currently lives in Groningen, the Netherlands where he has set down his anchor to raise a family and write. Founder and publisher of industry publication Blockchain News (EST 2015) and director of education company Blockchain Partners (Oracle Partner) – Vancouver native Richard Kastelein is an award-winning publisher, innovation executive and entrepreneur. He has written over 2500 articles on Blockchain technology and startups at Blockchain News and has also published in Harvard Business Review, Venturebeat, Wired, The Guardian and a number of other publications. Kastelein has an Honorary Ph.D. and is Chair Professor of Blockchain at China's first blockchain University in Nanchang at the Jiangxi Ahead Institute software and Technology. He has over a half a decade experience judging and rewarding some 1000+ innovation projects as an EU expert for the European Commission's SME Instrument programme as a startup assessor and as a startup judge for the UK government's Innovate UK division. Kastelein has spoken (keynotes & panels) on Blockchain technology at over 50 events in 30+ cities.