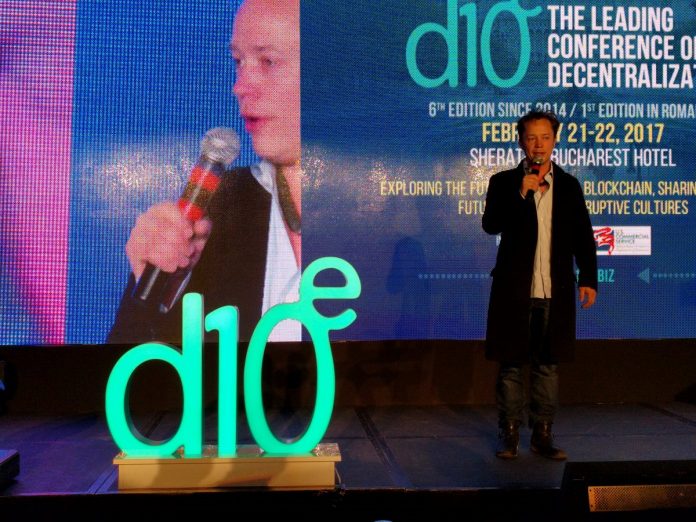 At the recent d10e event in Bucharest managing partner of Blockchain Capital Brock Pierce announced plans to partly raise a new $50 million fund by issuing its own digital tokens  in an Initial Coin Offering (ICO) becoming the first VC to jump into the fray.

Pierce was pragmatic about it while announcing to the crowd in Romania – stating that it was a risk they really wanted to take, but was also a little uncertain how it would play out.

“Every morning I get up I am totally excited to enter into another day of Blockchain – we are investing half a million a month,” stated Pierce.

In a later interview in Bloomberg Pierce said the ICO could take place “in the next month or two,” and the company will more fully describe the tokens, which are expected to trade on secondary markets, in an upcoming offering memorandum, which will be issued through TokenHub in about a month.

Blockchain startups doing ICOs have raised about $270 million last year according to Blockchain researcher Smith & Crown and they are popular as even small investors typically afford to invest, you don’t need to be accredited and buyers can trade them on secondary markets, instead of sticking around long term.

The regulatory uncertainty around ICOs is what allows anyone from anywhere who wants to make the choice to invest,  the ability to do so without being told they are unaccredited (not wealthy enough to play).

The regulatory uncertainty allows for the ICOs to move at pace of innovation that is not tied to pencil pushers lobbied by big interest groups to create laws that inhibit or even snuff out the ecosystem.

Governments are national while ICOs take place in a global setting. The US SEC and other regulatory bodies are moot for the most part as US and other investors are investing with pseudonymity using Bitcoin which is not even considered money by most governments – but rather a capital asset.

And for most ICOs,  the startups are not even offering any equity but just the chance to buy into the currency at reduced rates for bigger profits after the ICO on the cyptocurrency exchanges.

The ICO community crowdsources due diligence on upcoming ICOs which offers a high level of  self-regulation and industry security.

In the crypto-hangouts – particular at Bitcointalk where almost all ICOs are first broadcast, scores of net-savvy investors start googling the history of the founders and teams, ripping apart the code, hammering the theory, and generally kicking the living shit out of the concept – by the tens. Then they out scammers who end up shrivelling out the forum with their tails tucked and hang the ICO. You also have new companies like Smith and Crown doing great work analysing ICOs and others are now moving into that space and providing more centralised market intelligence.

In terms of ‘breaking the law’ when it comes to spending your own money as one sees fit in an investment they feel they can handle –  Obama opened the doors slightly with the JOBS act and one does not have to be an accredited investor to reap rewards any longer. And so it should be.

But the Americans are already three years behind the UK and Netherlands in crowdfinancing. ICOs are, in particular, have been a panacea to American investors (particularly those with a lot of unclaimed cryptocurrency) who want to participate.

One glaring issue that many VC will have with the ICO arena is the fact that many of the projects are open source software and hardware projects which are usually the kind of investments that get kicked to the curb by most traditional investors. Propietary means patents and Intellectual Property means protection of assets. Giving everything away via Open Source is not considered the best business strategy by most investors. Except the ones who get it.

Secondly there is no equity in many cases – believe it or not – most Blockchain startups doing ICOs don’t go the equity route just to keep far from the problem of securities – and for most investors, they are happy to play the exchanges after the ICO and buy and sell much like the Forex scene.

Yes, it is the Wild West –  there’s quite a lot of Bitcoin and Ether profit floating around that is getting pumped into these projects. Half of all Bitcoins are in the hands of less than 1000 people out of a $15 billion market cap. They are called Bitcoin whales. And they are the ones manning the pumps for a large part of the $270 million invested via ICOs over the past year.

Blockchain Capital is smart to take a leap into this space because it will encourage others – particularly if Pierce can turn a healthy profit.

Recently Polychain Capital raised $10 million from Andreessen Horowitz and Union Square Ventures for a cryptocurrency hedge fund, but Pierce it taking it one step further by actually doing his own ICO with Blockchain Partners. With Blockchain Partner’s strong track record and history of supporting the cryptocurrency scene, it’s highly like Pierce has nothing to worry about and this could be the beginning of the next chapter for venture capitalism.