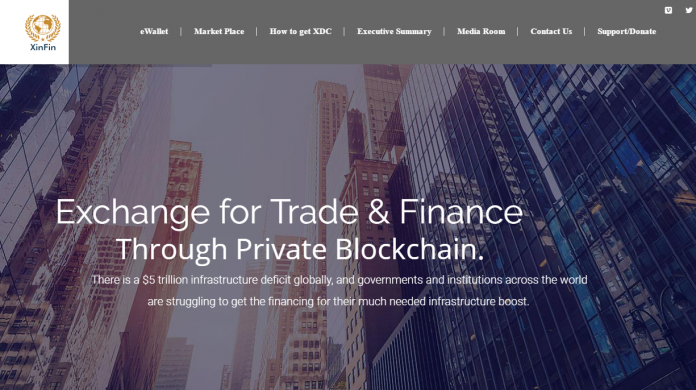 Enterprise-grade Blockchain solutions platform, XinFin is all set to launch its institutional financial marketplace. The platform, fueled by native XDC cryptotokens offers all the goodness of cryptocurrency systems through integration of smart contracts between buyers, sellers, and financiers. It also facilitates instant cross-border payments and settlements using XDC. As a part of its development roadmap, the platform has also announced the upcoming XDC Pre-ICO token sale where all interested parties can purchase some of the Xchange Infinite Development Contract (XDC) tokens.

XinFin, through its institutional financing marketplace, introduces Blockchain technology to real-world applications involving various institutions, projects, and transactions. The platform is designed to address the existing issues between industries, financier rating systems, and real-time settlement mechanisms. In order to fit the evolving needs of various existing business models, the XinFin team has incorporated several changes to the Ethereum open source architecture. These changes have resulted in the development of a Blockchain infrastructure suitable for a private distributed network of participants spread across the world.

The growing XinFin network comprises of institutions seeking global or local procurements for their projects and suppliers with proven products capable of meeting the requirements, but lack sufficient reputation for financier backing.

The XinFin team has listed four specific benefits of Blockchain technology which are leveraged by its marketplace for the following reasons;

a. To be an instant cross-border settlement mechanism through its native token XDC
b. To map smart contracts to real world contracts
c. To use XDC to incentivize financiers to fund projects with low buyer and seller rating
d. To build an equity exchange over XDC for projects that want to raise capital

The Head of Marketing for XinFin Alex Mathbeck, explaining the implementation of smart contracts for real-world applications said,

“We have interest from hospitals looking to acquire machinery, low-income countries who want to build their tourism spots, counties seeking efficient farming equipment, new techniques and cheaper ways to build rural roads and transport, and farming institutions that want training and e-learning programs or alternative ways to hedge weather risks.

Our team of over 30 financiers worldwide is working on mapping smart contracts to real-world contracts and laying the groundwork for all stakeholders to get the projects underway.”

Global supply chain financing today is either dependent on the ratings of sellers and buyers. There is no way to execute promising pilot projects based only on project viability with a low or non-existent buyer and seller ratings. Also, the lack of global real-time settlement and financing mechanisms makes it hard for both project creators and financiers to implement and fund the potential high-risk projects respectively.

Xinfin.org platform incentivizes the financiers by giving smart-exchange facility over XDC for equity investments and risk-hedging through the underlying inflation proof XDC token. The company’s target is to bridge the global $5 trillion infrastructure financing gap that has created a huge disparity between the rich and the poor. Currently, traditional fiat currency financing mechanisms allow projects with high rated buyers and suppliers to leverage their ratings multiple times. However, it totally ignores viable projects with a low or non-existent buyer and seller ratings.

Alex also explained the reasoning behind the choice to run XDC on its own private distributed network, stating,

“The latency time of public Blockchains like Bitcoin, Ethereum, and other crypto coins makes it difficult to build any real-time payments dependent use case. We see great promise in the architecture that has followed, and XDC will be run on a private distributed network. It takes only 5 seconds to complete a transaction on the XinFin XDC network.”

The decentralized Blockchain-based marketplace will not just be limited to the institutions but will also be open for individuals who want to take up the leadership in identifying and initiating projects, crowdsourcing for support and completing the trade and finance over the xinfin.org XDC network.

The underlying Blockchain uses proof-of-stake mining, though a large portion of XDC has been pre-mined. The mining will be available to credible institutions worldwide. The architecture is derived from the Ethereum open source platform; However, it is entirely independent of ether and gas. Xinfin.org is releasing open APIs to use XDC as a settlement and payment mechanism for global remittances, reward points and trading of unutilized inventories.

The Xinfin Foundation is building a strong team of over 100 financiers, Blockchain programmers, functional experts and business development personnel all over the world and all the team bios will be available at the time of marketplace launch. The project has opened its pre-ICO token offerings in limited numbers for its early backers. The native Blockchain token XDC, powering the xinfin.org platform is being listed on various exchanges.

Facebook
Twitter
Pinterest
WhatsApp
Previous articleEuropean Energy Companies to Test Peer-to-Peer Trading Over The Blockchain
Next articleVPN Blockchain Startup Mysterium Network Raises 68,629 ETH ($14,358,975 USD) in under 45 minutes
Richard Kasteleinhttps://www.the-blockchain.com
In his 20s, he sailed around the world on small yachts and wrote a series of travel articles called, 'The Hitchhiker's Guide to the Seas' travelling by hitching rides on yachts (1989) in major travel and yachting publications. He currently lives in Groningen, the Netherlands where he has set down his anchor to raise a family and write. Founder and publisher of industry publication Blockchain News (EST 2015) and director of education company Blockchain Partners (Oracle Partner) – Vancouver native Richard Kastelein is an award-winning publisher, innovation executive and entrepreneur. He has written over 2500 articles on Blockchain technology and startups at Blockchain News and has also published in Harvard Business Review, Venturebeat, Wired, The Guardian and a number of other publications. Kastelein has an Honorary Ph.D. and is Chair Professor of Blockchain at China's first blockchain University in Nanchang at the Jiangxi Ahead Institute software and Technology. He has over a half a decade experience judging and rewarding some 1000+ innovation projects as an EU expert for the European Commission's SME Instrument programme as a startup assessor and as a startup judge for the UK government's Innovate UK division. Kastelein has spoken (keynotes & panels) on Blockchain technology at over 50 events in 30+ cities.