Right behind the Bancor Protocol Foundation's announcement yesterday that author and Euro Designer Bernard Lietaer will step in as Chief Monetary Architect, the Bancor blog has also released details on their advisory board today. Spanning from venture capitalists to academia, startup geniuses to hackers – the board, chock full of heavyweights,  was finalised before for their upcoming token allocation event kicking off on June 12, at 14:00 GMT.

Excitement has been brewing amongst the cryptocommunity that Bancor could be a record breaker as a unique, fresh protocol for creating intrinsically tradeable cryptographic tokens unlike anything seen in the space yet. You can read more how to participate in the token event here. And read more about Bancor by exploring their FAQs here.

Tim Draper is the founding partner of Draper Associates and DFJ. Tim’s original suggestion to use viral marketing as a method for spreading a software application from customer to customer was instrumental to the successes of Hotmail, Skype, and others. Tim has been recognized as a leading supporter of entrepreneurship with numerous awards and honors. He was listed as #46 of the most outstanding Harvard alumni, #7 on the Forbes Midas List, #1 of the Most Networked Venture Capitalists by Always On, and #98 in Worth Magazine’s 100 Most Powerful People in Finance. Tim also received the World Entrepreneurship Forum’s “Entrepreneur for the World” in 2015. Tim received a BS from Stanford University with a major in electrical engineering and an MBA from the Harvard Business School.

In 2011, he created Draper University of Heroes, a residential and online school to help extraordinary young people meet their entrepreneurial goals. In July 2014, Draper received wide coverage for his purchase at a US Marshals Service auction of seized Bitcoins from the Silk Road marketplace website. In May 2017 he announced his first-ever support for the Tezos token. John Clippinger is co-founder and Executive Director of ID3 (Institute for Innovation & Data Driven Design), a 501 C(3) non profit organization formed to develop and field test an open source software trust frameworks (Open Mustard Seed) for data-driven services, infrastructures, and enterprises. He is also a Research Scientist at the MIT Media Lab’s Human Dynamics Group, a distinguished Research Fellow at the Institute for the Future, on the Steering Committee and

Advisory Board of the Blockchain Ecosystem Network (BECON), and a former Chairman of the ITU Working Group on Identity and Authentication. Previously, Dr. Clippinger was founder and Co-Director of The Law Lab at the Berkman Center for Internet & Society at Harvard Law School. He was also a Senior Fellow at the Berkman Center where co-founded Project Higgins, an open source, and identity framework to give users control over their personal information.

Dr. Clippinger is co-editor with David Bollier, of From Bitcoin to Burning Man and Beyond: The Quest for Identity and Autonomy in a Digital Society, 2014, and is the author of A Crowd of One: The Future of Individual Identity, 2007. Previously, he was Director of Intellectual Capital for Coopers & Lybrand and the founder of four artificial intelligence software companies. He consults with companies, foundations, NGOs, and government agencies on technology, policy and business strategy issues related to privacy, trust frameworks and social networks.

John is the author of several recent articles, white papers, and chapters on topics related to identity, trust frameworks and governance: Towards a Post Industrial Networked Democracy; A Decentralized Data Commons for The Exchange of Tokens of Trust and Value; A New Kind of Social Ordering: Self-Sovereignty, Autonomous Trust and P2P Parity; A Renaissance of the Commons: How the New Sciences and Internet are Framing a New Global Identity and Order; chapter in Code: Collaboration, Ownership and the Digital Economy; and many more.

Dr. Clippinger is a graduate of Yale University and holds a MA. and Ph.D. from the University of Pennsylvania, where completed his thesis on a computational model of discourse composition. He is a member of the eG8 Forum, the Global Leadership Telco Council and the Risk Analysis Network for the World Economic Forum. He is a frequent participant at The DoD sponsored Highlands Forum, The Aspen Institute, the CEO Leadership Institute of Yale School of Management, Creative Leadership Summit, Chinese Academy of Sciences, Aspen Institute Italy, World Technology Network Leader Finalist, Telco 2.0, Fortune Brainstorm, Arab Thought Leadership Conference, Kauffman Summer Institute, Monaco Media Forum, Ashoka, The Santa Fe Institute Business Network, World Government Summit, Cambridge Institute for Sustainable Leadership and the Blockchain Ecosystem Network. Yoni Assia is the founder and CEO of eToro, and has been active in cryptocurrency since 2010, starting the Colored Coins protocol in 2013. He then hosted Vitalik Buterin, founder of Ethereum, at the eToro offices in the early days of Colored Coins’s development, after which he took this concept successfully forward with Ethereum. Yoni is a well known speaker on the future of finance, fintech and blockchain. In his spare time, Yoni is developing a new currency concept that will promote a more fair distribution of wealth in society. He is also the father of 3 children and husband of Mor Assia, founder of iAngels.

Brian Singerman has a been a member of the Founders Fund investment team since 2008.

After graduating from Stanford University with a BS in Computer Science, Brian joined a start-up, There, Inc., as a software engineer. He was recruited to Google in March 2004, and spent the next four years as an engineer and executive at the company, where, among other projects, he founded iGoogle. While at Google, Brian started his career as an investor, founding his own angel fund, the XGYC Fund, seeking early-stage opportunities with businesses that challenge the status quo. At Founders Fund, Brian relentlessly seeks out companies that can deliver massive returns to investors while also providing real value to humankind. He invests across all sectors and stages, with a particular passion for companies reinventing huge industries like healthcare, biotechnology and education. Brian serves on the boards of Affirm, AltSchool, Emerald Therapeutics and Oscar. He was also a board director at Misfit, prior to the company’s acquisition by Fossil in 2015, and Stemcentrx, before the company was acquired by AbbViein 2016 in the largest private biotech acquisition of all time. 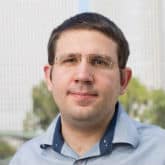 Mr. Rosenfeld is a mathematics M.Sc. graduate of the Weizmann Institute of Science. After completing his studies in 2009, Mr. Rosenfeld became the head of research at SimilarWeb, where he was in charge of developing algorithms for measuring connections between websites and analyzing web traffic. He discovered Bitcoin in early 2011 and soon after founded Israel’s first Bitcoin exchange service, Bitcoil, while performing mathematical research on the algorithms that underlie the functioning of the Bitcoin and blockchain system. Mr. Rosenfeld became chairman of the Israeli Bitcoin Association in 2013. He will advise Bancor executives as the company develops its technical solution for the liquidity challenge faced by the long tail of cryptocurrencies.

Lee is an entrepreneur and early stage investor who works with startup founders to help them find product/market fit and grow to become impactful businesses.

Previously, he lead Facebook’s emerging initiatives in commerce and mobile ads. Lee joined Facebook via the acquisition of Karma, a breakthrough commerce company he founded which allowed smartphone users to instantly send physical products to others without mailing addresses.

Prior to Karma, Lee founded Tapjoy and piloted the company to its position as a leading mobile advertising platform which today touches more than 1 billion devices and generates hundreds of millions of dollars in advertising revenue. He began Tapjoy by co-creating multiple top mobile games for iOS/Android and subsequently unraveling the potential of mobile advertising and app distribution at scale.

Earlier, Lee worked for venture capital firm Kleiner Perkins and helped launch the iFund, a $100M investment vehicle focused on smartphone application platforms. Lee originally began his career working in product development at Microsoft, where he co-created the Windows Home Server division and shipped the first version of that product to market.

Lee holds a MBA from Stanford’s Graduate School of Business and a BA in Computer Engineering from the University of Michigan. He grew up in the suburbs of Detroit, Michigan and today lives and works in New York City

Lee has been a featured speaker at universities, conferences, and panels worldwide and has received numerous awards for his work including 30 under 30 Best Young Tech Entrepreneur by Bloomberg Businessweek, 100 Most Creative People in Business by Fast Company, and The Silicon Valley 100 by Business Insider.

Justin Rosenstein is the co-founder of Asana along with Facebook co-founder Dustin Moskovitz. Asana’s software enables teamwork without email, and provides key communication infrastructure to companies like Airbnb, Foursquare, Pinterest, Twitter, and Uber. Asana’s mission is to help humanity thrive by enabling all teams to work together effortlessly.

Justin has led the development of products that hundreds of millions of people use daily. At Facebook, he was the tech lead for projects including the Like button and Facebook Pages, and designed the in-house project management system that Facebook relies on to this day Facebook. At Google, he product-managed several projects in the communication/collaboration division, and created the initial prototype for Gmail Chat.

Justin majored in Math and got part way through a Master’s in Computer Science at Stanford. He is also a serious student of yoga, meditation, and cats.

Yariv Gilat is the Founder and CEO of Financial Algorithms (Final), a firm specializing in the development of trading algorithms and trade execution technology.

Mr. Gilat is a well known serial entrepreneur, active angel investor and strategic adviser. He was Chief Executive Officer of Kryptonite Ltd., an investment company focused on managing hedge funds, and has served on the boards of Playtika and Face.com. Guy Corem is a software developer by trade, having served as an IDF Mamram instructor and and engineer at Voltaire, Broadcom and Intel. He is a hacker and entrepreneur with a passion for crypto. Previously, he was the CEO of Spondoolies-Tech, a developer, manufacturer and vendor of state of the art Bitcoin mining rigs. Guy has been an active contributor for many years to the global Bitcoin community.