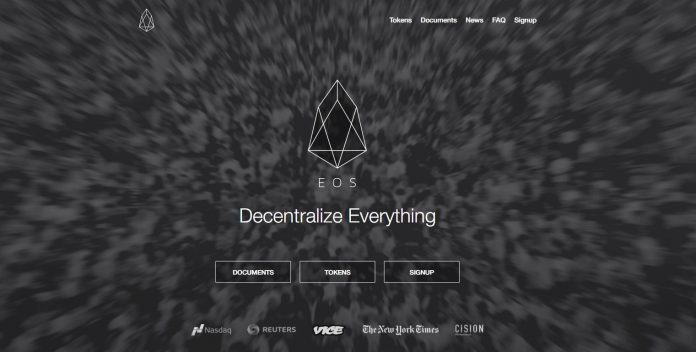 “To ensure inclusivity, EOS are not sold for a fixed price, but sold at a price determined by market demand; this mimics mining, but does not offer unfair advantages to large purchasers,” said Brendan Blumer, CEO of block.one, the open source software and blockchain company developing EOS.

block.one will distribute one billion EOS ERC-20 compatible tokens, called “EOS Tokens” over 341 days starting on June 26, 2017 at 13:00 UTC following the below schedule:

EOS is being designed to scale mainstream development for large enterprises, currently unsupported by existing blockchain platforms. EOS introduces asynchronous communication and parallel processing to support millions of transactions per second, higher than that of Facebook and Google at 52 and 40 thousand per second, respectively.

EOS is being designed to support distributed applications that have the same look and feel of their centralized counterparts, including eliminating the requirement for the user to pay for every transaction. This enables new blockchain users to get involved without having to navigate the complex process of purchasing a cryptocurrency and should help to spur the industry. It also means any type of application can be built, run, and governed by EOS’s operating system, creating a new level of transparency for business.

The expansive EOS team is being led by blockchain veterans:

Full details of the token distribution are disclosed in the terms and conditions, at eos.io.

Facebook
Twitter
Pinterest
WhatsApp
Previous articleBlockchain Application Platform Lisk Announces First Major Release, Lisk Nano 1.0
Next articleSeven Major European Banks Select IBM to Bring Blockchain-Based Trade Finance to Small and Medium Enterprises
Richard Kasteleinhttps://www.the-blockchain.com
In his 20s, he sailed around the world on small yachts and wrote a series of travel articles called, 'The Hitchhiker's Guide to the Seas' travelling by hitching rides on yachts (1989) in major travel and yachting publications. He currently lives in Groningen, the Netherlands where he has set down his anchor to raise a family and write. Founder and publisher of industry publication Blockchain News (EST 2015) and director of education company Blockchain Partners (Oracle Partner) – Vancouver native Richard Kastelein is an award-winning publisher, innovation executive and entrepreneur. He has written over 2500 articles on Blockchain technology and startups at Blockchain News and has also published in Harvard Business Review, Venturebeat, Wired, The Guardian and a number of other publications. Kastelein has an Honorary Ph.D. and is Chair Professor of Blockchain at China's first blockchain University in Nanchang at the Jiangxi Ahead Institute software and Technology. He has over a half a decade experience judging and rewarding some 1000+ innovation projects as an EU expert for the European Commission's SME Instrument programme as a startup assessor and as a startup judge for the UK government's Innovate UK division. Kastelein has spoken (keynotes & panels) on Blockchain technology at over 50 events in 30+ cities.