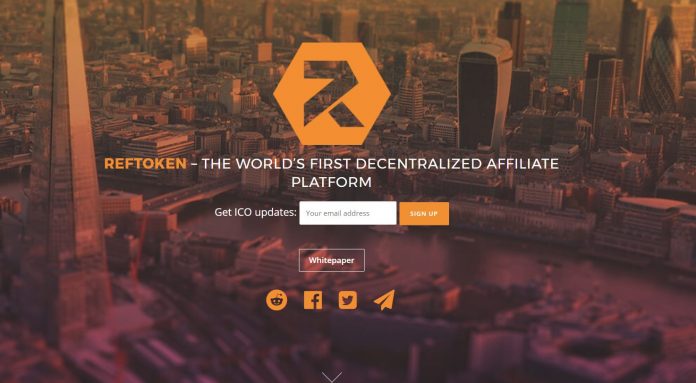 RefToken has announced the public release of v0.1 of its prototype affiliate platform ahead of its upcoming pre-ICO which is slated for early September (date TBA).

“With today’s release, the RefToken platform is one step closer to its Q4 public beta, an event that all our team are working tirelessly towards,” stated CEO Jan Sammut.

RefToken is an affiliate tracking platform that will allow developers to leverage the thousands of news sites, bloggers, influencers and marketers working in the space and reward them for referring users.

The purpose of the prototype’s early stage release is to acquire input and suggestions from members of the Blockchain Affiliation Alliance (BAA), a non-profit alliance of Blockchain based businesses committed to best practices in Blockchain based affiliate marketing. This input will be compiled and vetted for inclusion in RefToken’s development roadmap in order to develop a platform that best serves the end users.

The prototype can be accessed here and will allow early adopters to assess its use cases, as well as potential ICO contributors to understand the platform and its potential.

RefToken says there is a dire need for platforms like theirs to up-end the top-down approach that has defined the industry so far and work bottom-up, building the features that end users ascribe most value to, rather than what is assumed to be the highest priority in a quarterly brainstorm. This approach, they say,  will deliver a better product faster, improve adoption, provide greater value to token holders, and establish RefToken as a top Blockchain affiliation platform.