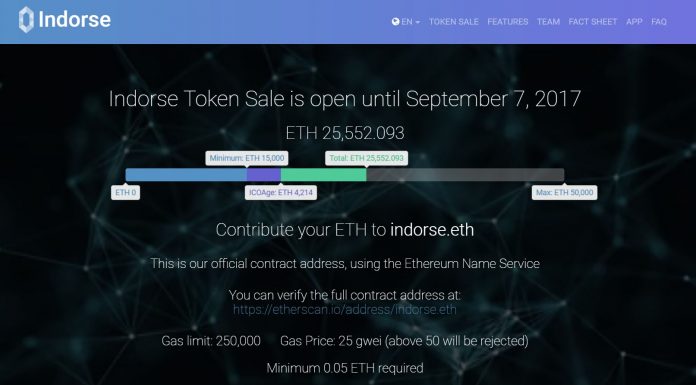 Indorse, a Blockchain-powered decentralized network for professionals, released the specifics of its grant of an additional seven percent share to Coinsilium Group Limited for S$350,000. This announcement follows the project’s successful pre-sale raise of $5.5 million USD. Just launched, the Indorse token sale will run until September 7, 2017.

“With the explosion of social networks over the last several years, social media has unquestionably become an integral part of our lives. Yet privacy violations and data ownership controversies have seen many users fall out of love with their favourite platforms.”

Offering users full control over their own data as they build their professional profiles and share skills on the platform, Indorse aims to build a serverless, decentralized network where users benefit from platform growth and data insights rather than third parties.

Coinsilium Group Limited (NEX: COIN), the accelerator that finances and manages the development of early-stage Blockchain technology companies, previously invested S$100,000 in Indorse in June of this year. Following the successful completion of its pre-sale, which saw 18,396.21 ETH, approximately $5.5 million USD, raised in just three days, Indorse has granted Coinsilium Group Limited an option to subscribe for an additional 7% of the fully diluted share capital of Indorse for S$350,000.

“The impressive pre-sale is a vote of confidence for Indorse and reaffirms our position and belief in both the platform and the team. As privacy fears grow, and revenue models fail, the time is ripe for building a Blockchain-powered decentralised platform for professionals. We are confident that the proceeds from the pre-sale and the ongoing public token sale will provide the financial resources for the team to achieve their compelling objective.”

The Indorse token sale will run until September 7, 2017 where the Indorse Tokens (IND), the required payment method of buying advertising space on the platform, will be distributed to token sale participants, representing approximately 35% of the total supply created. The IND token is a tradeable token, and participants will also receive Indorse Score (SCR) tokens, which are a non-tradeable reputation token required to post updates to the member profile or indorse and flag claims, once the platform is released on the mainnet.

Indorse presents a platform where users will build their profiles and profit from their reputation and from contributing on the platform. Similar to the Proof of Stake mechanism, the Indorse Score allows moderators to stake their reputation on a claim or indorsement, offering users an easy way to earn rewards through a token based system.

“While current models can be viewed as invasive and advertiser-driven, the Indorse platform shifts the power to the hands of its users. Advertising placements can be bought by agencies at fixed rates, with large portions distributed directly to the users on the platform as a reward for sharing their knowledge and expertise.”

The average social media user may not comprehend the true value of their online presence and data. Despite what platform providers may have us believe, social media is not ‘free’ for use. As the saying goes, if you’re not paying for it, you’re the product,” Moskowitz added.

For more information on the token sale, visit www.indorse.io.

Facebook
Twitter
Pinterest
WhatsApp
Previous articleDecentraland Partners With imToken, Connext, and Bitcoin Suisse
Next articleICOBox Token Presale Attracts $8.3 Million
Richard Kasteleinhttps://www.the-blockchain.com
In his 20s, he sailed around the world on small yachts and wrote a series of travel articles called, 'The Hitchhiker's Guide to the Seas' travelling by hitching rides on yachts (1989) in major travel and yachting publications. He currently lives in Groningen, the Netherlands where he has set down his anchor to raise a family and write. Founder and publisher of industry publication Blockchain News (EST 2015) and director of education company Blockchain Partners (Oracle Partner) – Vancouver native Richard Kastelein is an award-winning publisher, innovation executive and entrepreneur. He has written over 2500 articles on Blockchain technology and startups at Blockchain News and has also published in Harvard Business Review, Venturebeat, Wired, The Guardian and a number of other publications. Kastelein has an Honorary Ph.D. and is Chair Professor of Blockchain at China's first blockchain University in Nanchang at the Jiangxi Ahead Institute software and Technology. He has over a half a decade experience judging and rewarding some 1000+ innovation projects as an EU expert for the European Commission's SME Instrument programme as a startup assessor and as a startup judge for the UK government's Innovate UK division. Kastelein has spoken (keynotes & panels) on Blockchain technology at over 50 events in 30+ cities.