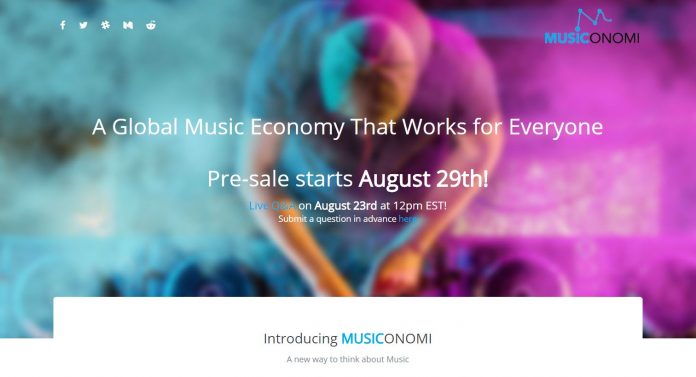 Musiconomi, the Blockchain-based music ecosystem, has today announced that Jaxx, the leading multi-asset digital wallet, as its official wallet partner. Following the pre-sale for Musicionomi (MCI) tokens due to commence August 29, 2017 and public crowdsale starting August 31, Jaxx will integrate Musiconomi’s Ethereum-based token into its platform. The integration will let supporters send and receive MCI tokens and manage their own keys via Jaxx’s easy-to-use app.

“Musiconomi is delighted to announce the pre-eminent Ethereum wallet as its official partner. We are excited to offer Jaxx’s intuitive, secure, and compelling user experience across multiple platforms to our supporters.

“Jaxx has a tremendous network of partnerships and we see this as an opportunity to engage with them and add value in a way that will also benefit users of the Musiconomi platform,” added Phifer.

“At Jaxx, we love helping groups who strive to bring innovation to industries of all kinds. Jaxx is excited to be working with the Musiconomi team and looks forward to participating in their journey to solve problems related to the many areas of friction in the music industry.”

Along with token management, Jaxx plans to explore further synergies with Musiconomi in the areas of live and digitally-recorded music. Jaxx will also offer Musiconomi ongoing support in the critical areas of user identity verification and content rights management.

In addition to enabling musicians to release their work, create simplified licenses, and get paid directly and immediately for each play, Musiconomi incentivizes users to share tracks socially by rewarding them with its MCI tokens. Each artist is in complete control of determining the reward for their albums and tracks, letting them choose between higher revenue or more promotion at the granularity of an individual track.

Entrepreneurial music enthusiasts, such as marketers and audio technicians, are also able to use the platform to provide and be compensated for their expertise. MCI token holders will gain access to the Musiconomi platform’s plethora of features including playlists, radio streaming, virtual merchandise and ticket storefronts.

Musiconomi is the second startup to pass through Cofound.it’s crowdsale incubation program and will leverage the Cofound.it Priority Pass mechanism as a part of the sale. Musiconomi’s pre-sale starts on August 29, 2017 at 5:00pm CEST. The public crowdsale will begin on August 31, 2017 at 5:00pm CEST and has a minimum threshold of $3 million USD and a maximum cap of $6 million USD.

A total of 25,000,000 MCI tokens are being distributed in the cMowdsale, and funds raised will be used to drive the development, expansion, and adoption of the platform. 70% will be going to development, 21% to marketing and PR, and 9% to administrative, legal, and overhead over the first 24 months.

Supporters can participate in the Musiconomi crowdsale with Ethereum (ETH).