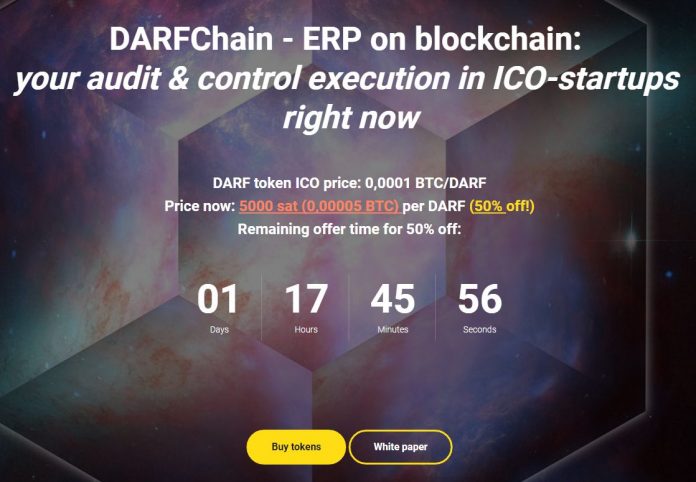 Russian startup DARFChain, (Distributed Accounting, Resource and Financial System in Blockchain) a pre-ICO revolutionizing ERP to control and audit post-ICO projects,  has received authorization of its DARF token as a verified asset of a DEX – decentralized exchange.  The token operates on the Waves Blockchain platform.

The token can now be openly traded on the exchange including with Bitcoin and euro.  Remarkably, DARF increased its value even before the start of the official ICO.

DARFChain, founded by Stanislav Taktaev and Konstantin Bakulev, demonstrated during testing the possibility of synchronizing distributed data of ERP with the use of Blockchain technology.  Crypto entrepreneurs are seeking to raise the level of transparency and the degree of confidence in their ICO project, as well as crowd investors who want to control the project supported by them, receive a reliable tool for their work.  The development was carried out on the Waves Blockchain platform using the ODOO ERP system and the BigchainDB database.

The significance of DARFChain’s accomplishment of developing the token for ERP-systems on the block for the development of the digital economy has already been written by the Russian Forbes. Well-known entrepreneurs in the global IT community Pavel Vrublevsky and Yegor Ryzhikov believe that modern digital mechanisms for ensuring business transparency in a trusted environment will open new opportunities for the development of a global network of local economies.