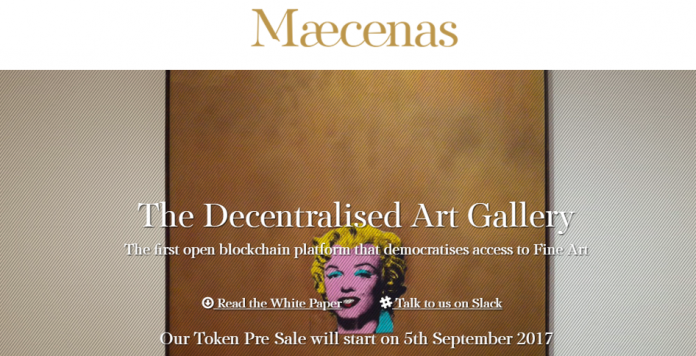 Maecenas, a decentralized art gallery democratizing access to fine art, has announced its public token crowdsale launching September 7, 2017 at 5pm CEST. Maecenas will offer ART tokens which will let users auction masterpieces on its blockchain-powered platform. Maecenas is among the first projects to pass through Cofound.it, the leading platform for training the world’s most promising blockchain startups. It will leverage Cofound.it’s Priority Pass to host a token pre-sale commencing September 5, 2017 at 5pm CEST. The minimum sale threshold is $3 million USD, with a milestone target of $10 million USD, and a $20 million USD hard cap.

“Who wouldn’t want a piece of a Picasso?” Maecenas CEO Marcelo Garcia Casil said. “Until now, only the super-rich took an interest in fine art auctions. But we divide paintings into digitized fragments so that they are affordable. Many more people will now have access to the world of fine art.”

“As for artists’ names, works by Rubens, Goya, and Picasso have already been proposed to us,” Jérôme Croisier, Maecenas Chief Art Officer said.

The ART utility token functions as a clearing and settlement mechanism for all transactions of artwork on the Maecenas ecosystem. Blockchain technology is used to break down a single piece into many fragments and create tamper-proof digital certificates denoting ownership. Supporters will be able to use ART tokens in auctions to bid for these certificates.

“The art world has been in need of modernizing, people have been craving greater transparency and liquidity,” Amelie Janssens, project management head at Notz Stucki, one of Europe’s largest asset management companies, said. “It is great to see Maecenas providing innovative solutions, bringing a new frontier for art.”

“FUSION advised the team to focus on one industry, the Fine Art Market. The team quickly seized the opportunity and has been able to create a unique product with enormous potential.”

Maecenas has studied global financial jurisdictions, built a minimal viable product, and lined up masterpieces to be offered on the platform. Maecenas will dedicate up to $10 million USD towards operational costs to launch its platform and open in markets around the world. Contributions beyond the $10 million will be dedicated to purchasing artworks for sale on the platform by auction.

Supporters can participate in the Maecenas crowdsale with Ethereum (ETH).