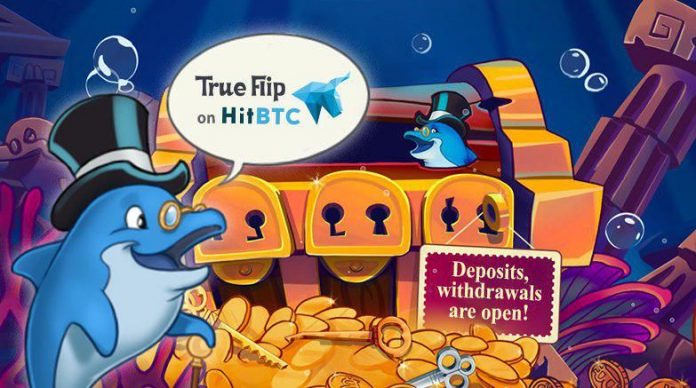 TFLs belonging to the Team (20% of the initial emission) are stored safe and intact and won’t be subject to trade – in full accordance with White Paper.

The tokens were initially sold for .0005 BTC in the ICO but are currently trading at about .0004.

The company initially offered up to 21 000 000 tokens at the price of 0,0005 BTC per TFL. Over 3000 participants acquired the total of 6 247 267 TFLs, while the rest of the initial amount was “burned” to proportionally increase each token holder’s percentage in the overall token amount.

The final overall amount of existing TFL after burning is 8 924 667 tokens. No more True Flip tokens will be issued, which brings extra value to this limited offer.

While the lottery itself is running fine, token holders are not yet able to take advantage of holding their TFP tokens on the site, to participate in the earnings.

Facebook
Twitter
Pinterest
WhatsApp
Previous articleDoc.ai Announces First Blockchain-Enabled Natural Language Processing Platform For Quantified Biology
Next articleKyberNetwork Rewards Early Community with Token Structure and ICO
Richard Kasteleinhttps://www.the-blockchain.com
In his 20s, he sailed around the world on small yachts and wrote a series of travel articles called, 'The Hitchhiker's Guide to the Seas' travelling by hitching rides on yachts (1989) in major travel and yachting publications. He currently lives in Groningen, the Netherlands where he has set down his anchor to raise a family and write. Founder and publisher of industry publication Blockchain News (EST 2015) and director of education company Blockchain Partners (Oracle Partner) – Vancouver native Richard Kastelein is an award-winning publisher, innovation executive and entrepreneur. He has written over 2500 articles on Blockchain technology and startups at Blockchain News and has also published in Harvard Business Review, Venturebeat, Wired, The Guardian and a number of other publications. Kastelein has an Honorary Ph.D. and is Chair Professor of Blockchain at China's first blockchain University in Nanchang at the Jiangxi Ahead Institute software and Technology. He has over a half a decade experience judging and rewarding some 1000+ innovation projects as an EU expert for the European Commission's SME Instrument programme as a startup assessor and as a startup judge for the UK government's Innovate UK division. Kastelein has spoken (keynotes & panels) on Blockchain technology at over 50 events in 30+ cities.